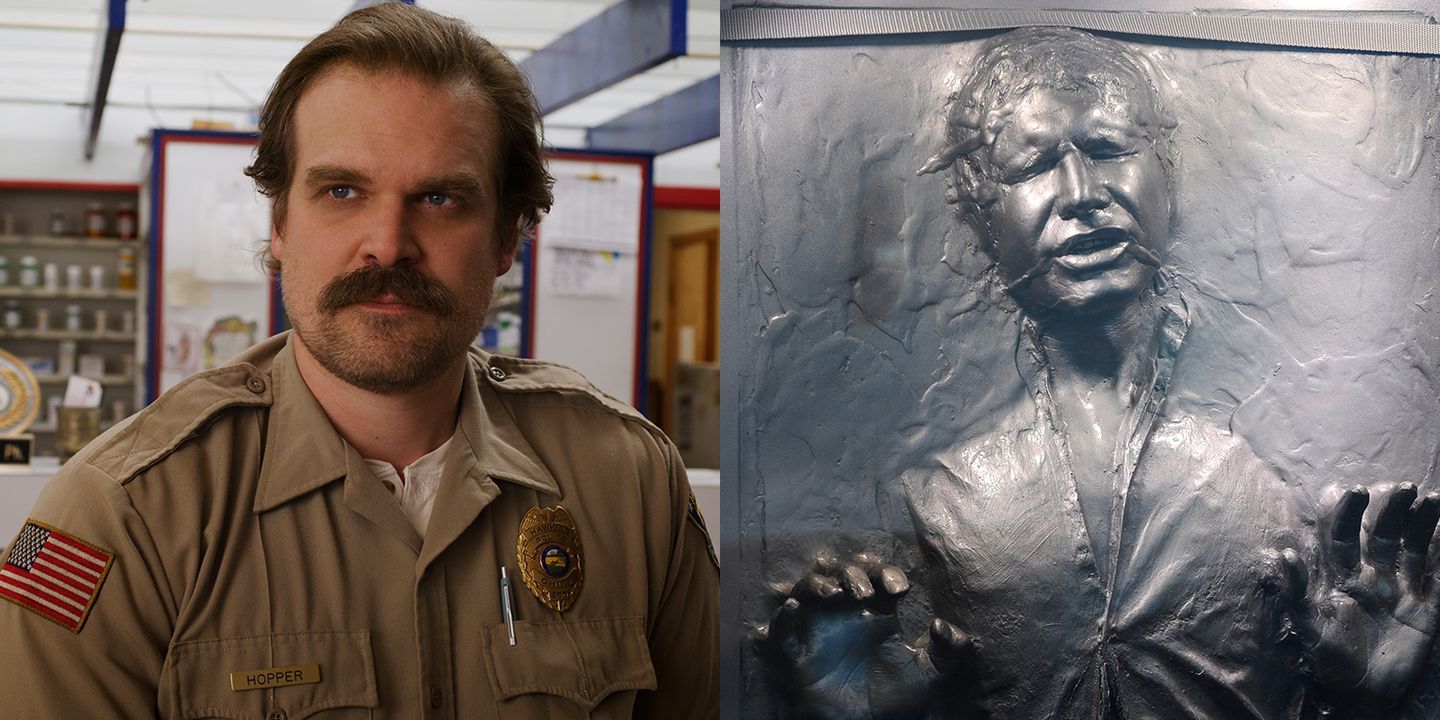 Spoilers for Stranger Things Season 3 below. ?

Stranger Things 3 hit everyone’s screens on July 4, and within hours, it was breaking hearts all over the globe. One of the main reasons for the plethora of crying GIFs on social media is the unexpected fate of everyone’s favorite resident adoptive father: Detective Jim Hopper.

Here, we take a look at what happened to Hopper at the end of Season 3 and whether David Harbour’s character is really … dead?

Hopper and Joyce worked together to save the world.

The main storyline in Season 3 revolved around a group of Russians who had made a machine that could open the gate to the Upside Down, which lies beneath Hawkins. While the kids were on a quest to stop Billy, the Mind Flayer, and the flayed residents of Hawkins, Hopper and Joyce took on a quest of their own: to stop the Russians.

With the help of scientist Alexei (who we’re crushing on hard) and journalist-turned-conspiracy theorist Murray Bauman, Hopper and Joyce figured out how to stop the gate to the Upside Down from being reopened. However, they were also being stalked by a Terminator–like figure intent on killing them both—and who succeeded in fatally shooting Alexei (be still my beating heart).

After taking the Starcourt Mall elevator all the way down to the Russian’s underground Hawkins lair, Hopper killed a bunch of guards and stole their uniforms. Once inside the war room, and using Alexei’s intel, Joyce and Hopper figured out how to turn off the machine. However, the Mr. Terminator guy ruined their plans.

Hopper had a fist fight with the Terminator … and won.

While Joyce was left to try and stop the machine on her own, Hopper fought the Russian Terminator, dangerously close to the huge machine that was blasting into the Upside Down’s gate below Hawkins. However, Hopper miraculously won, throwing the Terminator into the machine’s rays, seemingly killing him in the process.

However, Joyce ended up having to hit the machine’s kill switches before Hopper could make it back to the safety of the war room. In a devastating but pretty beautiful moment, Hopper said goodbye to Joyce—and to dedicated viewers. As Joyce stopped the machine, everything in its wake was destroyed, with hazmat-suited Russians literally evaporating into thin air. Hopper, too, disappeared and was presumed dead.

But is Hopper really dead?

As this is Stranger Things, a character’s death isn’t necessarily final. And in Hopper’s case, there are several plausible explanations for what happened to him at the end of Season 3.

Firstly, he could be dead. This is obviously the worst-case scenario for fans who thought they were finally going to see romance blossom between Hopper and Joyce. All of the show’s characters presumed that Hopper was dead. After all, he literally disappeared into thin air, supposedly evaporated by the Russian’s powerful machinery, which explains why his body was never found.

Season 3 ended with an emotional letter from Hopper, which he’d originally written as an impassioned speech to Eleven and Mike about keeping the door open three inches when they were together. In the heartbreaking note, Hopper also went into detail about all of the ways in which Eleven had opened him up to his feelings and what a privilege it was to watch his adopted daughter grow up.

It made Hopper’s disappearance even more final and was the perfect sign-off for the character—he’d finally gotten to father a daughter, having lost his own, and Eleven got to experience having the reliable parent she’d desperately craved.

However, the post-credits sequence left viewers with some questions.

He’s in the post-credits Russian jail.

Another possibility is that Hopper isn’t dead, but he merely traveled between locations when the Russian machine exploded. The post-credits sequence added fuel to this fire when guards were choosing a prisoner to feed to a Demogorgon. At the first cell, one of the guards said, “No, not the American,” and instead picked a Russian prisoner. Could the American in that cell be Hopper?

Esquire discussed this particular theory, noting that scientist Alexei actually gave a detailed explanation of how the Russians’ machine worked. In Episode 7, Murray translated Alexei as having said the following.

He calls it the key and this key emits a great energy. It requires much strength and power. Those houses like the ones they found they’re stealing from your town’s energy supply. There are many of these keys before in Russia, but they turned out wrong … They’re using this energy to break through a barrier to open a doorway between worlds. But it seems this key was only half the equation. Location was the other half. In Hawkins this door had been opened once, it was still healing. It is opening.

Perhaps the machine can transport matter between separate locations, or keys, as well as between the real world and the Upside Down. If so, Hopper could’ve been zapped from Hawkins and transported to the Russian location we saw at the start of the season. In which case, he’s very much alive but in danger of being fed to a Demogorgon.

Fans also theorize that Harbour’s new beard is evidence that Hopper is still alive. Perhaps the actor wasn’t allowed to shave his facial hair so that when Stranger Things Season 4 starts filming, he’ll have a rugged look for Hopper’s time in the Russian prison. According to Seventeen, the speculation escalated after Millie Bobby Brown posted photos from her “daddy daughter date” with Harbour on Instagram.

Another reason why I think Hopper is still alive, why else would David Harbour be growing his beard out, BECAUSE HOPPER CAN’T SHAVE IF HE IS BEING IMPRISONED BY THE RUSSIANS or maybe he just likes having a long beard idk pic.twitter.com/Wj9Rlv5B8v

chief jim hopper returning to his telepathic daughter in the middle of ohio after spending too many days in a russian prison energy. we see that beard king! pic.twitter.com/bqrG0MMfF5

He’s in the Upside Down.

As Alexei revealed, the machine is a doorway between worlds, meaning that Hopper could be stuck in the Upside Down. Considering the highly suggestive post-credits sequence, it seems far more likely that Hopper is in the Russian jail, but it’s certainly not impossible that the detective was transported into the Upside Down when he evaporated in the machine’s rays.

His death mirrors Han Solo’s in The Empire Strikes Back.

Speaking on the Behind the Scenes: Stranger Things 3 (via Entertainment Weekly), Matt Duffer revealed that Hopper’s death was inspired by Han Solo’s in The Empire Strikes Back.

Duffer’s comments suggest that Hopper isn’t really dead at all. As all Star Wars fans know, Han Solo was frozen in carbonite in Empire only to be thawed out in Return of the Jedi. According to SyFy, this was done because Harrison Ford wasn’t sure if he wanted to return to play Han Solo for a third movie. But at the same time, rather than definitively killing off the character, it left the door open for a reprisal.

“I’ll see you in hell” is a direct quote from Han Solo in Empire Strikes Back, the film where Han was frozen in carbonite and taken to another world.

Steve’s favorite Star Wars movie? The one with the teddy bears, aka Return of the Jedi. …

By this rationale, it would seem that Harbour’s Hopper could most definitely come back. Plus, Men’s Health explored all of the parallels between Stranger Things and Star Wars, with all signs pointing to Hopper’s return.

Either way, there are so many possibilities for Season 4, most of which revolve around finding out the exact fate of Hopper. We’re all secretly hoping that Eleven’s new dad, and Joyce’s prospective love interest, isn’t really dead at all. Because what is Hawkins without Hopper?

READ  Official Photos from The Mandalorian Revealed!
Share on FacebookShare on TwitterShare on PinterestShare on Reddit
newsgrooveAugust 15, 2019

What to stream this weekend: 'The High Note,' 'The Vast of Night,' HBO Max's 'On the Record' documentary