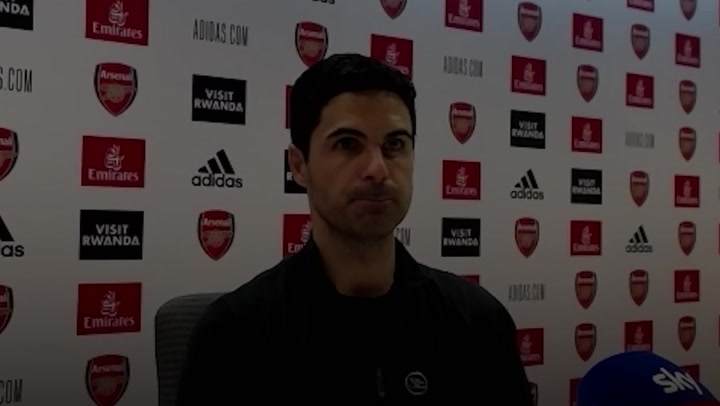 Mikel Arteta‘s latest concern suggests that his message has not got through to Arsenal‘s players.

The Gunners needed a 96th-minute equaliser through Alexandre Lacazette to rescue a 2-2 draw at home to Crystal Palace on Monday after Arsenal legend Patrick Vieira‘s team took the lead in the second half.

The result means the north Londoners have drawn their last two games, coming off the back of three successive wins in the lead-up to the international break.

And post-match, Arteta lamented that his side “played with the handbrake on.”

“We managed to score the goal, and we were in control. And then our level dropped,” the Spaniard told Arsenal Media.

“We had no composure on the ball, we started to give the ball away too easily, we didn’t have any sequences in our passes, we wanted to attack in one or two passes and the distances were too big.

Arteta has encountered a familiar problem at Arsenal

“I think we put the handbrake on a little bit. We started to defend something.

“We were not moving fluently enough and taking the right decisions, playing forward more and being more ambitious to score the second goal in that moment.”

And his assessment of the Palace game is the mirror image of his more upbeat words during the Gunners’ good run of form over last season’s Christmas period in which they reordered three victories – coincidentally halted by the Eagles.

Following the 4-0 thumping of West Bromwich Albion, Arteta said his players “took the handbrake off” instead.

“The energy and the convincing momentum that you get from everybody that is involved is much more positive,” the Arsenal boss explained at the Hawthorns in January.

“I wasn’t that concerned with performances [during the preceding losing run], we lost games that we were really unlucky and some was our own fault because we made some errors and we lacked some discipline at some moments.

“But you need to win football matches and this brings a different moment, energy and, as well, the players took the handbrake off and you can see they are more free to play.”

Arteta’s comments following the draw with Vieira and co this week were not without foundation, as the Gunners took the first four shots of the match and took the lead in the eighth minute through Pierre-Emerick Aubameyang.

What can Arteta do to get Arsenal back to winning ways? Let us know your thoughts below.

From then on, though, Palace were allowed to flex their own muscles and made it four trips to the Emirates without losing.

Thomas Partey‘s decision to loiter on the ball instead of driving forward – a potential ‘handbrake’ moment – allowed Christian Benteke to sneak in and equalise.

Odsonne Edouard then struck to make it 2-1, finally forcing Arteta’s men to bomb forward and look to score, eventually doing so in the dying embers.

The performance showed the other direction in which their 3-1 north London derby victory over Tottenham Hotspur could have gone, a game that Arsenal did indeed drive on in to extend their advantage after finding the back of the net early on.

With Aston Villa at home up next under the Emirates lights on Friday, the pressure will be on the Gunners to produce a more controlled display.