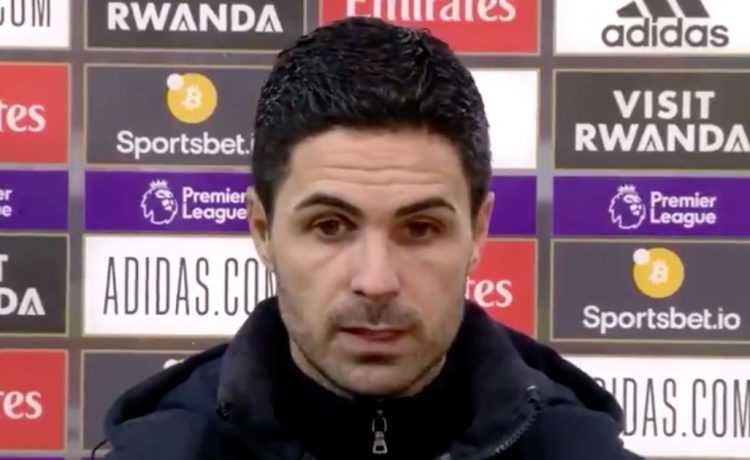 Mikel Arteta admits he doesn’t know how soon Kieran Tierney will be back for Arsenal, admitting the Gunners missed him on Thursday night.

Tierney has become an increasingly important player for Arsenal this season, both in defence, but crucially going forward.

A muscle issue kept him out of the Gunners’ 0-0 draw with Crystal Palace, and Arsenal were noticeably less effective in attack.

Arteta provided an update on Tierney following the fixture, saying: “I don’t know [when he will be back]. He is going to have an MRI scan and we’ll see how he is.”

On how much Arsenal missed him against the Eagles, he added: “He’s a real threat and the way we are playing and the way we attack on that left-side, he’s a really important player. We didn’t have him, he’s injured, and we have to find other solutions.”

Arteta wasn’t the only man who believed Arsenal missed the left-back on Thursday night.

Tierney’s fellow full-back Hector Bellerin pointed out Arsenal could have done with the defender bombing down the wing and whipping balls into the box against Palace.

Bellerin said: “Yeah I think so [we missed Tierney]. We do miss every single player when they’re not on the pitch.

“We also have great players coming back and I think Ainsley did a great job again, filling in, such a versatile player. But it’s also true that Kieran was enjoying a great run of form and we did miss him, probably, on the left side.

“But we have many talented players in many areas that can come in and we’re not a team that boil down to just one player. We need to find ways to be creative, to break down other teams, whatever challenge they give us, and we need to keep improving on that.”

Will Arsenal finish in the Premier League top four this season? Have your say here.