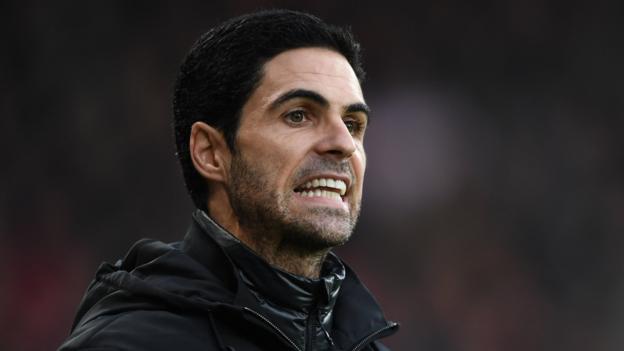 Arsenal manager Mikel Arteta says he wants to rebuild the side’s relationship with the club’s fans.

The Gunners, who drew 1-1 at Bournemouth on Thursday in Arteta’s first game in charge, have won just once in 14 league and cup matches.

“I was really pleased with how the fans treated the players [at Bournemouth],” said Arteta.

“I was happy that the players went to see the fans after the game as well because we need that connection.”

He added: “Slowly we need to build that back to where it was because it’s going to be very powerful for us to use that.”

Arsenal’s next game is at home to London rivals Chelsea on Sunday (14:00 GMT), when they will be aiming for their first Premier League win at Emirates Stadium since defeating Bournemouth 1-0 on 6 October.

The Gunners start the weekend in 11th place, eight points behind the fourth-placed Blues.

“We play for them [the fans]. At the end of the day, they’re expecting a lot from us,” said Arteta.

“We have to give them enjoyment, we have to make their lives better and when we win, they will be better because they will be happier.

“It’s our responsibility and we have to do everything we can to achieve that.

“I think it’s a very, very important part of my job.

“Energy is everything, in life, in football and in sports. If we are able to generate this, it will give us a lift.”