A midwife and a mental health nurse from the same hospital trust have died after contracting coronavirus.

Alam, whose father Mushtaq Afsar also died two weeks ago, was described as an “amazing midwife”. Her “skills and expertise helped to bring hundreds of new lives into the world,” , said the trust’s chief executive, Sarah-Jane Marsh.

In a statement, her husband Shazad said: “Saf was my beautiful and full of life wife.” He added they were childhood sweethearts, who grew up together, and their years together had been filled with “love, fun and adventure”.

A Go Fund Me appeal in memory of father and daughter has been set up. A bereavement notice on the Janaza Announcement Facebook page said Afsar died 14 days ago. “Sadly, his daughter Safaa, age 29, who is a midwife has also sadly passed away due to Covid-19”.

Mudzivare, who lived with her husband, Moses, and their daughters in Birmingham, was a “much-loved member of our Forward Thinking Birmingham team whose bubbly, vibrant and bright approach touched the lives of everyone who knew her,” said Marsh.

Staff paid tribute to her commitment to mental health and young people.

In a statement, her family described her a “such a beautiful mother, wife and friend” and a “very proud nurse always caring for those who needed her help”.

Four members of the trust’s staff have now died with Covid-19.

Tributes have also been paid to Andy Collier, 53, described as a “selfless” nurse practitioner at Hollins Park hospital in Warrington. The former rugby player, who died after testing positive for coronavirus, ran The First and Last pub in Leigh, with his wife, Carol. He had previously played for Wigan and Leigh Centurions rugby league sides. He was also a union representative for Unite and played golf at Leigh golf club.

His ward manager, Rob Kelly, said: “He was very down-to-earth, fair and selfless.” He had been admitted to the Royal Albert Infirmary in Wigan after becoming seriously ill on 31 March.

The chief executive at North West Boroughs Healthcare, Simon Barber, said: “It is clear he was a very dedicated and compassionate man. All our thoughts are with Andy’s family at this time and we offer them our sincere condolences.”

Healthcare assistant Jun Terre, 52, who worked at Stoke Mandeville hospital died on 14 May, having tested positive for Covid-19. He was described as a “a gracious, quiet and kind gentleman with a smile that would light up a room”, by Neil Macdonald, Buckinghamshire healthcare NHS trust’s chief executive. His wife also works at the trust.

The Labour MP for Slough, Tanmanjeet Singh Dhesi, paid tribute to his uncle, taxi driver Satnam Singh Dhesi, 63, who died at Slough’s Wexham Park hospital, from Covid-19. He posted on Twitter: “My uncle, a fun-loving guy who never spoke ill of anyone, sadly contracted Covid and even a ventilator couldn’t save him. Tragically I could only see his funeral via Zoom.”

Dhesi was a keen footballer and a regular helper and supporter at the Singh Sabha Football Academy in Slough, which had been co-founded by his son Harpreet. In April, the MP posted he had lost his grandmother to coronavirus. 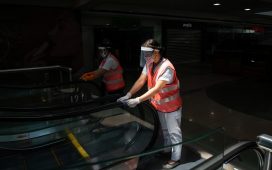