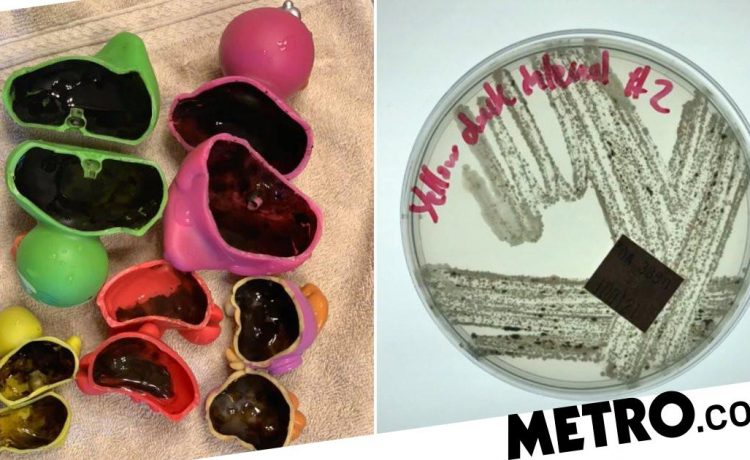 A microbiologist has revealed the hidden dangers of bath toys such as rubber ducks which can amass large amounts of bacteria inside.

Melbourne doctor Cameron Jones cut a dubber duck in half and revealed the dark, mouldy goo stuck inside.

He warned that the fungi, yeasts and bacteria hidden inside can lead to eye, ear and skin infections, allergies, vomiting, diarrhoea and other serious conditions.

Dr Jones’ message comes after a mum previously shared an image of a number of plastic bath toys cut up, revealing copious amounts of gunk.

The substance – called biofilm – are a host of different microorganisms, including bacteria, fungi and moulds, that stick to each other and form a slimy substance to help them survive and multiply.

In the warm temperatures of a bath, the environment is ideal for the biofilm to thrive.

Dr Jones shared a list of things parents can do to prevent biofilm build-up.

The doctor wrote on Facebook: ‘What’s shocking is that this is not just a one-off or a particularly old toy. Research found that 70% of bath toys contained the same black, slimy biofilm, and it could potentially be very harmful.’

Dr Jones added that water can get into the toy if there are any open holes. He recommended filling them in with a glue gun to prevent moisture from getting inside the toy.

He added: ‘It is still worth being vigilant, and maintaining a routine of drying the toys after use, boiling them, and then using a disinfectant product on them will help to ensure they stay clean and safe.’

After seeing the biofilm build-up, the mother decided to throw the items in the bin.


MORE : Two thirds of people never clean their jewellery even though it is covered in germs


MORE : Woman reveals how she scooped £1,400 of freebies including makeup, toys and gadgets