She is one of Britain’s most acclaimed actresses best known for her role in Downton Abbey.

And Michelle Dockery enjoyed a break from her hectic schedule as she visited the beach in Malibu, California with her friends this week.

The Lady Mary Crawley star, 38, cut a casual figure in a black sweater and boyfriend jeans as she chatted with her pals, snapped some selfies and took a paddle in the sea. 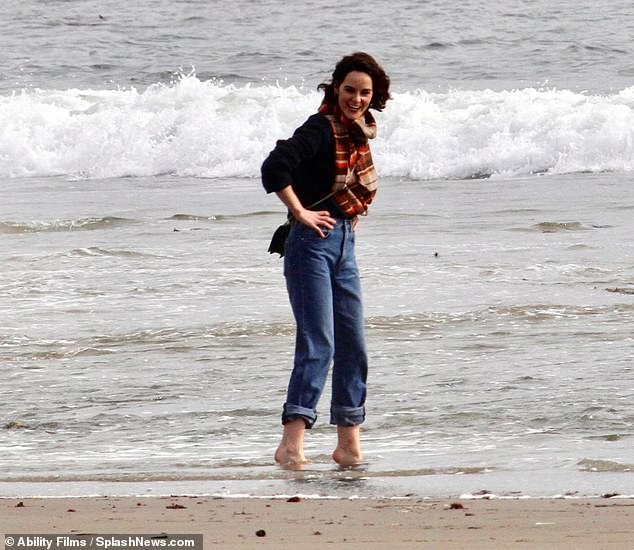 Beach day: Michelle Dockery enjoyed a break from her hectic schedule as she visited the beach in Malibu, California with her friends this week 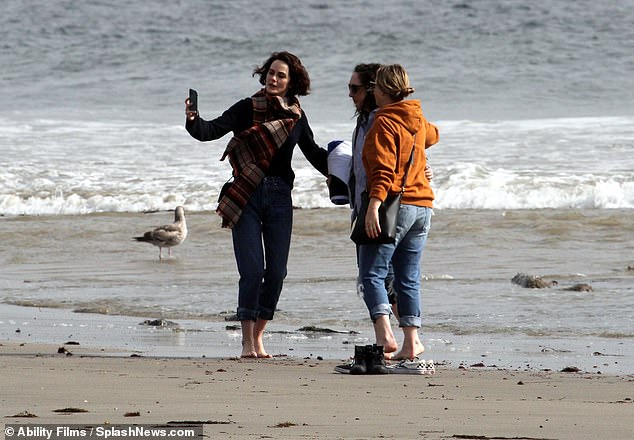 Relaxed: The Lady Mary Crawley star, 38, cut a casual figure in a black sweater and boyfriend jeans as she chatted with her pals, snapped some selfies and took a paddle in the sea

The beauty wrapped up in a tan and red checked scarf and wore a cross-body bag,

Her raven locks were styled in soft waves while the star wore a light palette of make-up.

Making the most of her day off, Michelle was seen walking up and down the beach, taking in the scenic views before walking onto the rocks.

2020 will be a busy year for Michelle who is set to star in drama, Defending Jacob,  alongside Marvel star Chris Evans. 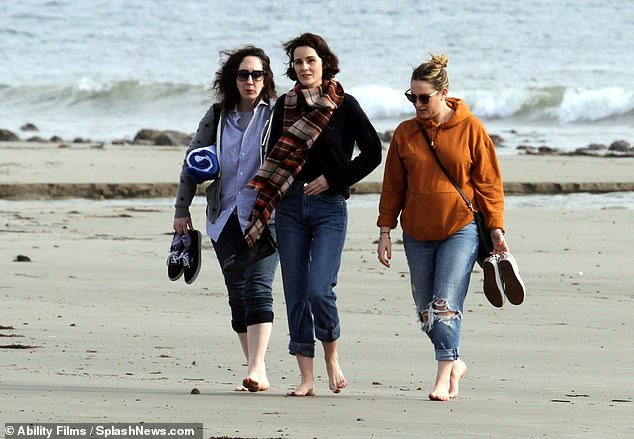 Barefoot stroll: The beauty wrapped up in a tan and red checked scarf and wore a cross-body bag as she walked barefoot across the beach 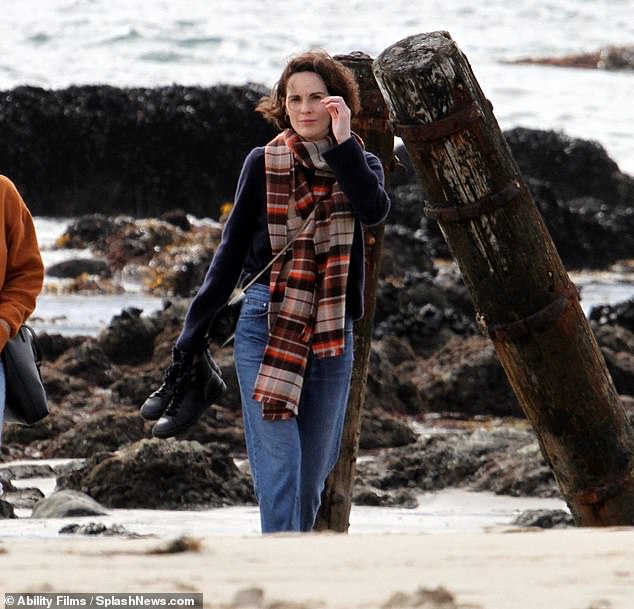 Beach chic: Her raven locks were styled in soft waves while the star wore a light palette of make-up 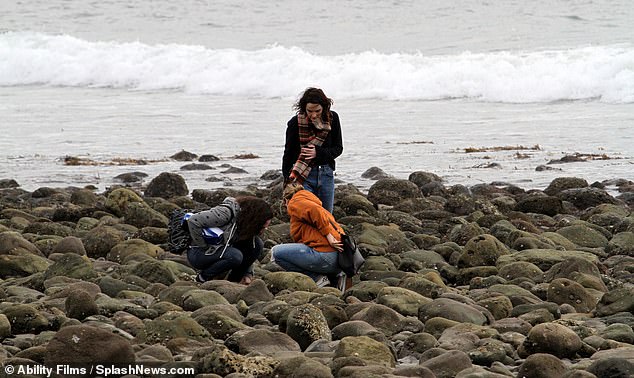 Explore: Michelle and her friends were seen walking on the rocks as they enjoyed their day 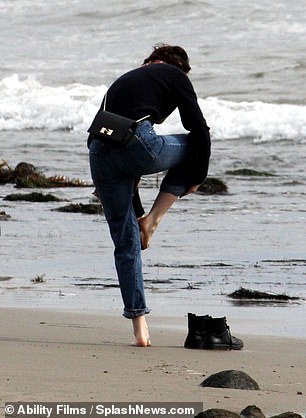 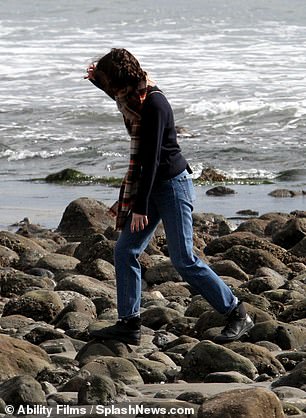 Casual cool: Michelle took her walking boots off for a quick dip in the sea before a walk on the rocks 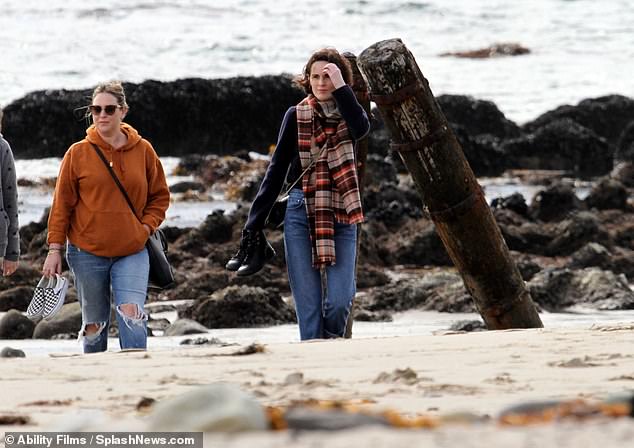 Scenic: Michelle looked relaxed as she took in the stunning views in California

Based on the gripping 2012 New York Times best selling novel by William Landay, the drama follows Chris’ character Andy Barber, an assistant district attorney who is investigating the murder of teen Ben Rifkin – a classmate of his son Jacob.

After searching Jacob’s room, he discovers a knife that fits the description of the murderer’s knife. He is left defending his son from the murder. 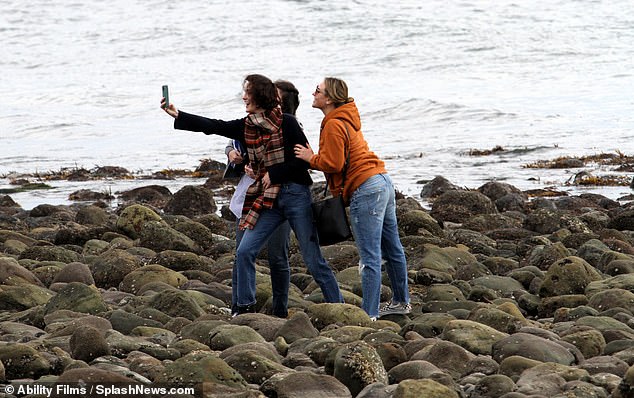 Photo time: Michelle looked delighted as she took a scenic photo with her pals on the rocks 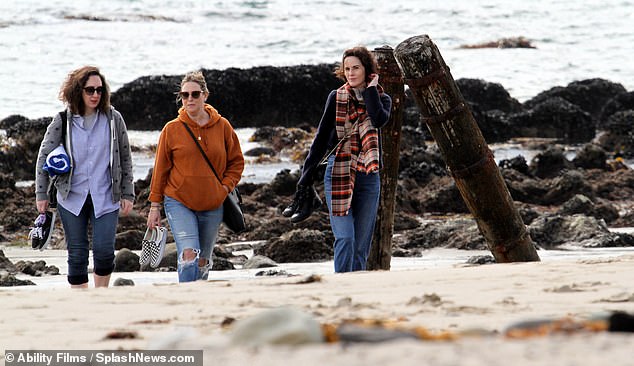 Radiant; The star looked gorgeous as she walked on the golden sands with her friends 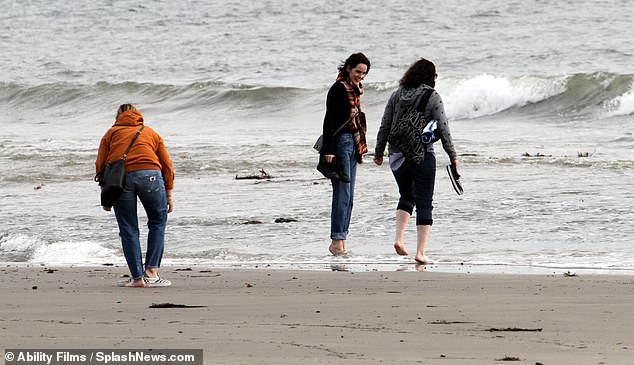 Delight: Michelle took a dip in the freezing waters during the blustery day 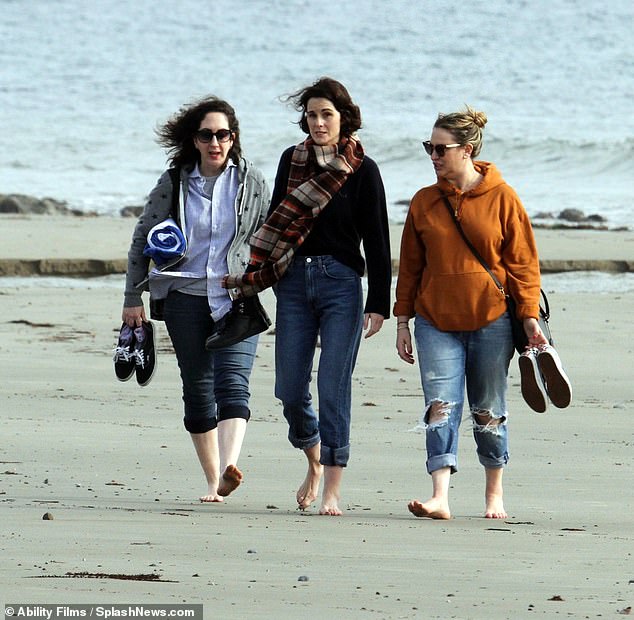 Chat: The pals looked happy as they walked along and chatted 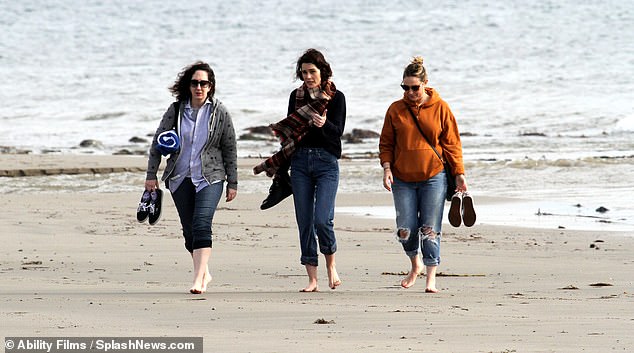 Walk: The trio soaked up the winter sun as they enjoyed a day of leisure

Michelle, is also appearing on the big screen in Guy Ritchie’s ensemble caper The Gentlemen.

Michelle recently spoke to PORTER magazine about an exciting time for female actors.

‘I do feel I stepped into this industry at a time when things were really beginning to change, especially for women,’ she explained.

‘It’s the golden age of television, where creators have the luxury of writing 10 hours as opposed to just two, so there’s room to explore a character in greater depth.

READ  Nancy Cartwright, the voice of Bart, has finally scripted an episode of 'The Simpsons'

‘It’s now becoming much more normal to start a job or to read a part and for me to have a dialogue with the creators – if there are moments where it’s felt the female character is not involved, for example – whereas I guess in the past, it would have felt like more of a fight.’ 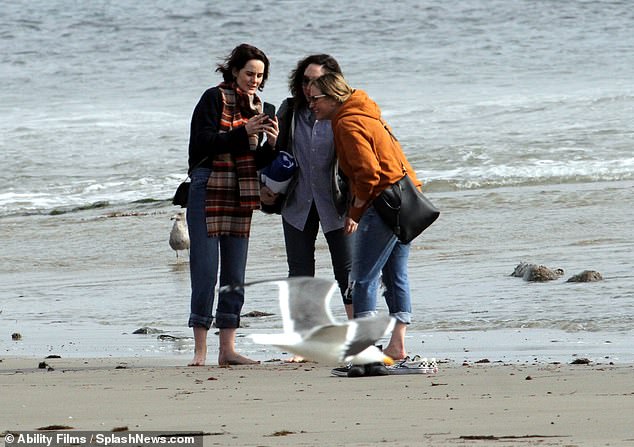 Leisure time: Michelle showed her pals something on her phone as the group chatted 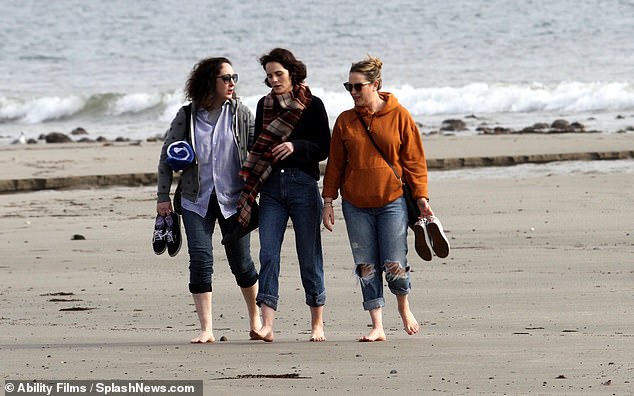 Fun in the sun; Michelle looked casually chic as she spent quality time with her friends 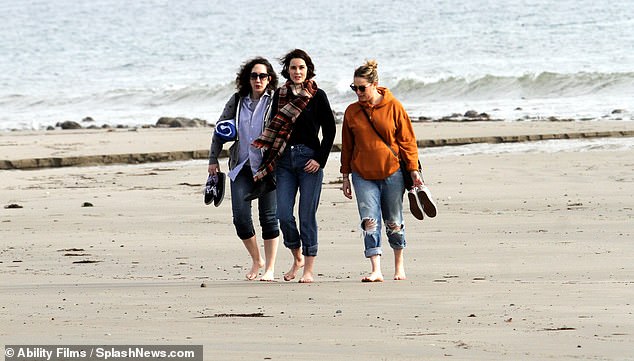 Wow factor: The group looked happy as they enjoyed a casual walk on the beach stateside 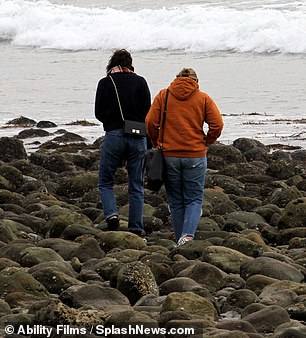 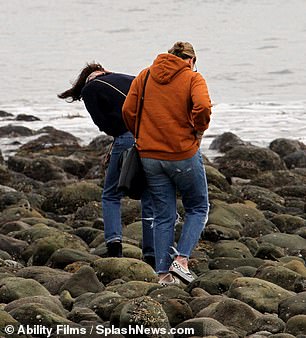 Views: Michelle looked fascinated by the rocks as she spoke with her friend 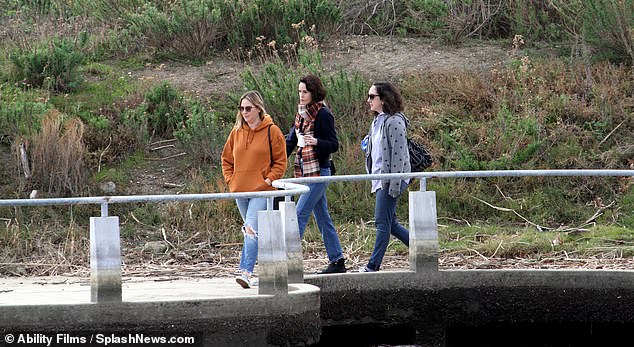 Walk: Michelle looked relaxed as she enjoyed the day with friends

It was also recently confirmed a  second Downton Abbey movie is in the works, according to the show’s creator Julian Fellowes who revealed the exciting news this week.

There has been much talk about the widely-discussed sequel following the roaring success of the first movie, which was a follow-up to the ITV series.

While chatting during the Winter TCA press tour session to promote his new ITV drama Belgravia, he confirmed work will start on the movie when he finishes writing his upcoming HBO drama The Gilded Age. 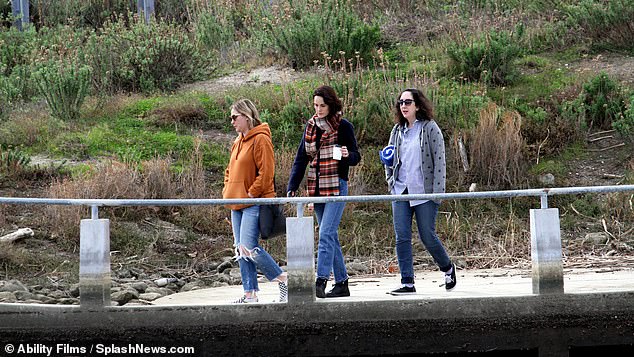 LA life: The group were in good spirits as they walked down to the beach together 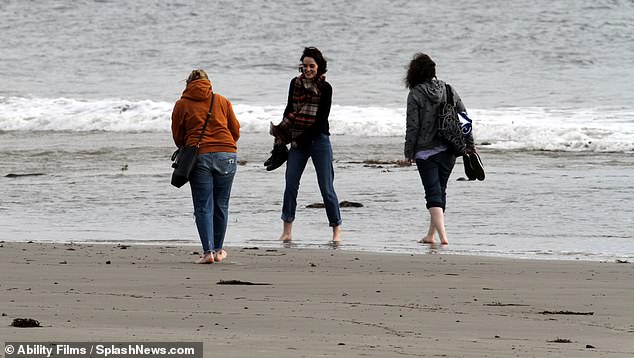 Banter: Michelle laughed as she took her shoes off for the quick paddle in the ocean

When he was asked about the sequel, Julian all but confirmed the news when he said: ‘Give us a break, guv. Not until I’ve finished the scripts for The Gilded Age’.

The first Downton movie was a record-breaking success that earned £136million when it was released in September 2019 and fans will now get another chance to see the Crawley family.

Back in December, movie producer Gareth Neame echoed Julian in revealing a return is coming as he too confirmed that a sequel is in the works.

Gareth told The Hollywood Reporter that after the first film’s huge success there have been early talks about making a follow-up, after they were left ‘holding their breath’ regarding the reaction to the film. 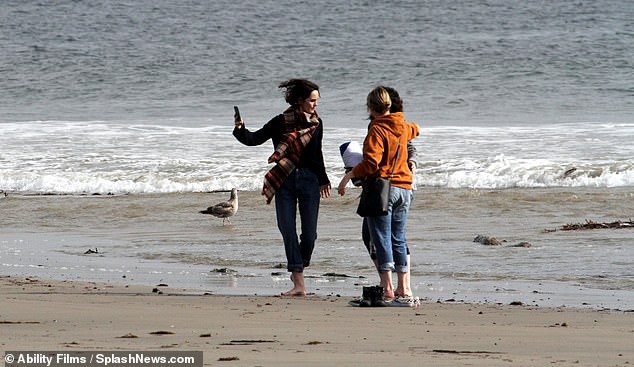 Photo: Michelle looked radiant as she took a photo with her friends 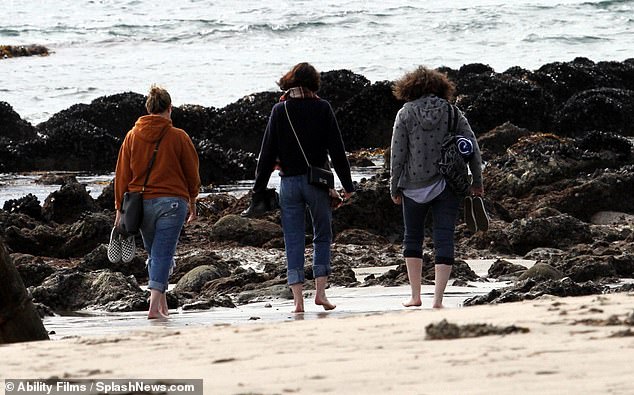 Footprints in the sands: The ladies hit a rocky patch as they continued their saunter down the beach

Prince Harry: David Beckham spills on secret chats with royal 'What we always spoke about'