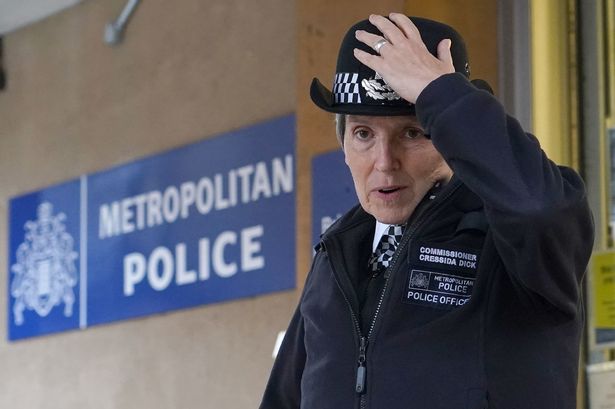 Dame Cressida Dick has resigned as Commissioner of the Metropolitan Police, after saying London Mayor Sadiq Khan “no longer has sufficient confidence in my leadership to continue”.

It has been agreed that she will continue to serve for a short period to enable an orderly handover.

Earlier today, when asked by the BBC if she should step down she said: “I have absolutely no intention of going and I believe that I am and have been, actually for the last five years, leading a real transformation in the Met.”

The news comes a week after Mr Khan said he was “not satisfied” with the Met’s Commissioner’s response to calls for change following a series of scandals.

Here are the most prominent:

Dame Cressida has long been accused of being too close to the Government – which is currently headed by a fellow alumnus of Balliol College.

She had been given a damehood on Theresa May ’s resignation honours list.

It was therefore inevitable that there would be much scrutiny aimed at how the Met reacted when news of parties at Number 10 during lockdown – potentially an offence at the time – began to break.

At first, the force’s line was that fixed penalty notices for lockdown rule-breaking should not be issued so long after the event.

As the weeks rumbled on and the party allegations kept coming, this line seemed increasingly untenable.

“Cress was inflexible and a bit slow-footed,” a senior colleague told the Evening Standard of her handling of the issue.

When it was announced at the end of January that the Met would be carrying out an investigation into the parties, it quickly became apparent that this would take the teeth out of the long-awaited Sue Gray report for legal reasons.

Those who suspected the police force and Government were too close then pointed to the fact that Deputy Assistant Commissioner Bas Javid, sibling of Health Secretary Sajid Javid, is a senior officer overseeing complaints about Partygate.

David Blunkett, the former Labour home secretary, had stern words to say about the now-former police chief and how she handled the affair.

“Whatever sympathies I have had for Dick and her colleagues is rapidly seeping away,” he wrote in a column.

“Unless the Met start to show the rational and clear leadership expected of them, heads, as in the political arena, must surely roll.”

The death of Sarah Everard, who was abducted off the streets of south London and then murdered by serving Met officer Wayne Couzens, shocked and appalled the nation.

It also led to questions about the culture in the Met, and how an officer with sexual misconduct allegations made against him was serving at the time.

Outrage boiled over when a protest led by women’s safety campaigners following Sarah’s death was broken up by police officers imposing lockdown rules.

The image of Patsy Stevenson pinned to the floor beneath two officers would be an enduring one and immensely damaging to the reputation of the Met.

Labour MP Harriet Harman told Dame Cressida that women’s confidence in the police “will have been shattered” by the affair.

Patsy Stevenson was pinned down by police officers
(

The last scandal before Dame Cressida stepped down came just last week and involved a number of police officers serving at the central London police station.

An investigation by the Independent Office for Police Conduct found officers were indulging in misogynistic workplace “banter”.

A vile set of WhatsApp groups and Facebook messenger chats saw them joke about “slapping your missus about” and calling them “daft c**ts” for getting murdered by their boyfriends.

It showed the cops, who were not named, would exchange highly offensive racist, sexist and homophobic messages while bullying and harassing colleagues.

In one chat two officers talk about hitting their female partners before blaming women in general for getting murdered by men.

Mina Smallman, the mother of Nicole Smallman and Bibaa Henry
(

The culture in the Met was called into serious question last year following the murder of Bibaa Henry, 46, and Nicole Smallman, 27.

The half-sisters were found in a park in Wembley after they were stabbed to death by Danyal Hussein, 19, at Fryent Country Park.

It later emerged that two police officers shared photos of their dead bodies and referred to them as “dead birds”, a misconduct hearing heard.

PC Deniz Jaffer, 47, and PC Jamie Lewis, 33, took “non-official and inappropriate photographs” at the crime scene before sharing them on WhatsApp between June 7 and 23.

Both men were sacked from the Metropolitan Police following a misconduct hearing and later handed sentences of two years and nine months each at the Old Bailey.

After the sentencing, the victims’ mother Mina Smallman told reporters that she was “pleased” by the sentence but added: “It is not a day for celebration.”

“They are more sorry that they got caught than they are about what they did,” she said.

“They’ve got caught with their hands in the cookie jar and now they’re sorry.”

The 27-year-old electrician was fatally shot at Stockwell Tube station in south London on July 22, 2005, when officers mistook him for a suicide bomber.

He had been spotted by officers looking for attempted bombing suspects and, despite video of him not being sent back to command for verification, then Gold Commanded Dame Cressida authorised officers to continue pursuit and surveillance.

Armed officers followed him onto a tube train and shot him seven times in the head.

The day after the shooting, the Met identified the victim as Jean and said that he had not been carrying explosives, nor was he connected in any way to the attempted bombings.

A subsequent trial found the Met Police guilty of endangering the public but exonerated then-Commander Dick.

She later described the killing as “an awful time”.

“I think about it quite often. I wish, wish, wish it hadn’t happened, of course, but if anything it has made me a better leader, a better police officer and it has made me more resilient,” she would later say.

In recent years multiple charges of racism have been levelled at the Met.

The mother of Bibaa Henry and Nicole Smallman said she knew that instantly “why they didn’t care” and that officers saw her daughters as “a black woman who lives on a council estate.”

More questions were raised about how the missing person case of Richard Okorogheye was handled.

The police watchdog is reviewing the handling of the case – which ended with Richard’s body being found two weeks after he went missing – and will ask whether ethnicity played a role in the way his case was handled.

Athlete Bianca Williams and her partner have publicly said they racially profiled when their Mercedes was stopped by Met officers in Maida Vale, in July 2020.

The couple was handcuffed and separated from their baby son.

The Met later apologised for any distress caused.