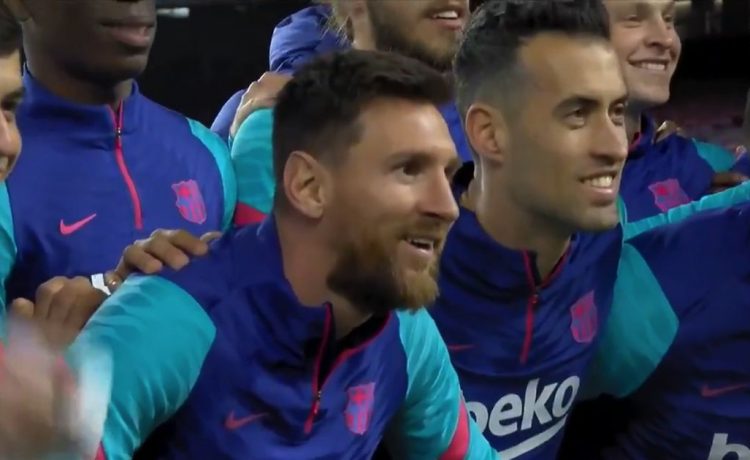 Lionel Messi gave his Barcelona teammates an inspirational speech ahead of a crucial victory to lift them back up to second place in La Liga.

A 90th minute goal from Ousmane Dembele gave Barca a 1-0 win over Real Valladolid to move within one point of Atletico Madrid at the top of the table.

Ahead of the game, Messi was caught in the tunnel motivating the team and hammering home the importance of the match ahead.

“We have to step it up a gear,” the Argentine said in an attempt to gee up his side. “We have to play with more rhythm.

“We have to win this however we can”

Earlier in the evening, the superstar was also honoured with a special commemorative framed club shirt to celebrate his recent breaking of the all time Barcelona appearance record.

Messi played his 768th game for the blaugrana as they thrashed Real Sociedad 6-1 in their last league outing, overtaking the previous record of former teammate Xavi.

The Barca legend has been linked with a move away from the club having publicly stated his desire to leave last summer amid a fallout with then-club president Josep Maria Bartomeu.

However, an upturn in form and changes among the club hierarchy with the return of former president Joan Laporta following recent elections could yet see Messi staying.

The Catalan club were almost left frustrated on this special night at the Nou Camp as Valladolid held them at bay.

Despite going down to ten men when Oscar Plano was sent off with ten minutes to play, the visitors looked to have secured a point until Dembele’s late intervention.

The Frenchman found space at the back post to hit a timely volley that was too powerful for Valladolid keeper Jordi Masip to keep out.

The win sees Barca leapfrog rivals Real Madrid ahead of the two teams squaring off in El Clasico next weekend.

Both teams are looking to chase down Atletico Madrid who head the table although Diego Simeone’s side saw their lead narrow this weekend following defeat to fourth-placed Sevilla.