When Prince Harry became engaged Meghan Markle and she accepted his proposal to be his royal wife, there was plenty she’d have to learn about life as part of the family.

In the lead up to their wedding and in the early months of their marriage, he stood at her side to guide her through official engagements, charity outings and private meetings with the Queen and the rest of The Firm.

But according to body language expert Judi James, a subtle hand gesture from Meghan Markle proved Harry’s role as guide and protector is now over and the “tide has changed” in their relationship, writes the Mirror.

In their infamous interview with Oprah Winfrey, the couple sat side by side on garden chairs as they detailed their version of life within the royal family.

Meghan made accusations of racism and said the Duchess of Cambridge made her cry, while Harry said his brother Prince William is “trapped” and claimed his dad Charles cut him off financially.

And Judi told The Mirror that their hand gestures show that while Meghan appeared confident, Harry was not and needed his wife’s support.

She explains: “I think when Meghan came to the UK, Harry very much saw himself in the role of overly protective husband that knew that all hell was going to break lose in terms of press and public interest, and was desperate to protect her – albeit that she presented herself as a very confident woman.

“But I think the tide has completely changed looking at the Oprah Winfrey clip.

“Now she seems to have taken a much more vulnerable Harry back to the US with her and she seems to be more in the role of rescuer and protector with him.

“This hand gesture that you can see, he’s got his hand on the chair and she’s placed her hand on top.

“That’s almost a maternal looking gesture, it’s though it’s being used for reassurance and to let him feed off her confidence.

“Clearly she’s friends with Oprah, she’s used to being in front of the cameras she’s an actress, but to Harry this is a whole new world that he’s being judged by and being asked to perform.

“And it sounds from the clip as though he’s going to rip his soul out in front of the camera and tell us about everything.”

According to Judi, Meghan is sitting with a pit-bearing gesture which shows she is confidence.

“She’s got the upturned V gap underneath her armpit which shows a confidence.

“When we feel like we’re being bombarded with difficult questions or we’re not comfortable women in particular tend to self-diminish, we bring out arms in.

“But with Meghan she’s got that super self-controlled, confident image going on here.”

However Judi believes that Harry’s body language tells a very different story, saying it suggests he needs that support from his wife.

She said: “Harry on the other hand is much less self-assured.

“He is sat diagonally and he kind of looks a lot more awkward.”

Highlighting that Harry’s hand was on his crotch, Judi added: “He is doing a male pose, he’s got his hand between his legs. It’s called the fig leave pose, it is a very self-protective gesture.”

She highlights how different his body language is to when he was interviewed by James Corden.

“Here he looks way more guarded and a lot more uncomfortable and very much in need of that hand clasp that he’s getting from Meghan.” 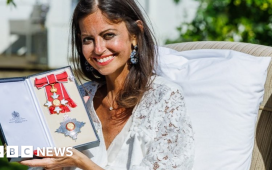 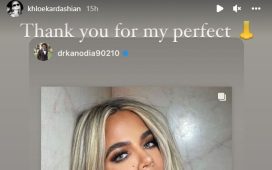 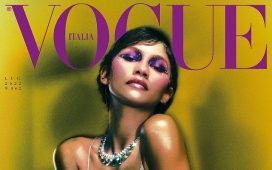 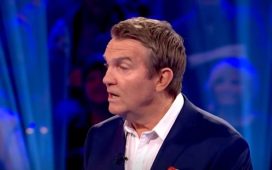