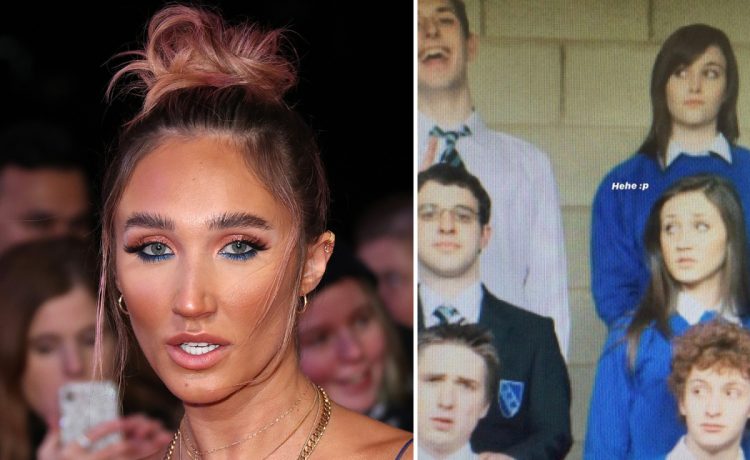 MEGAN McKenna has shocked fans by revealing that she was in Channel 4 series The Inbetweeners.

Taking to her Instagram Story, the reality-star-turned-singer filmed herself watching the show in bed laughing.

She wrote: “Best show ever. Simon’s my favourite by far, and the teacher.”

Megan then added a “fun fact” for her followers, posting a promo photo for the second series of The Inbetweeners which showed the main characters sitting in the middle of a class photo.

Megan circled her younger self, writing: “That’s me”, with the star positioned next to lead actor Simon Bird, who played Will.

She also shared a clip from the trailer that showed her in the background – although her face is not in view.

Speaking to the camera, the country star went on to reveal that The Inbetweeners wasn’t her only dabble with acting.

Explaining that it was part of her life in theatre school, Megan dished: “Oh I do love a throwback, why was I so cute back in the day? What happened?

“Another fun fact is I was in two of the Harry Potter movies as an extra, but I was also a quidditch player for the Gryffindor tryouts so I had a double and everything.

“I got to go to the set and look at the green screen and go to the quidditch ground.

Kerry Katona’s daughter Lilly, 17, wows fans with her likeness to her mum, 39

“It was part of my full-time schooling, I went to theatre school and we all had to study there and go off to set and film.

“I did a Hannah Montana advert on the Disney Channel, and one for the Cheetah Girls. I really had the best time at school – anyone who wants to go to theatre school I highly recommend, it’s the best time of my life.”

Megan shot to fame on The Only Way Is Essex before making a name for herself on other reality shows like Celebrity Big Brother and Ex On The Beach.