Megan Fox called the movie industry ‘ruthlessly misogynistic’ as she responded to a viral discussion on how she has been mistreated by Hollywood and sexualized as a young actress.

The 34-year-old Transformers actress took to Instagram on Monday to set the record straight with a long note which clarified some of the stories that have been emerging from her early career.

‘Please hear me when I thank you for your support. But these specific instances were inconsequential in a long and arduous journey along which I have endured some genuinely harrowing experiences in a ruthlessly misogynistic industry.’ she wrote. 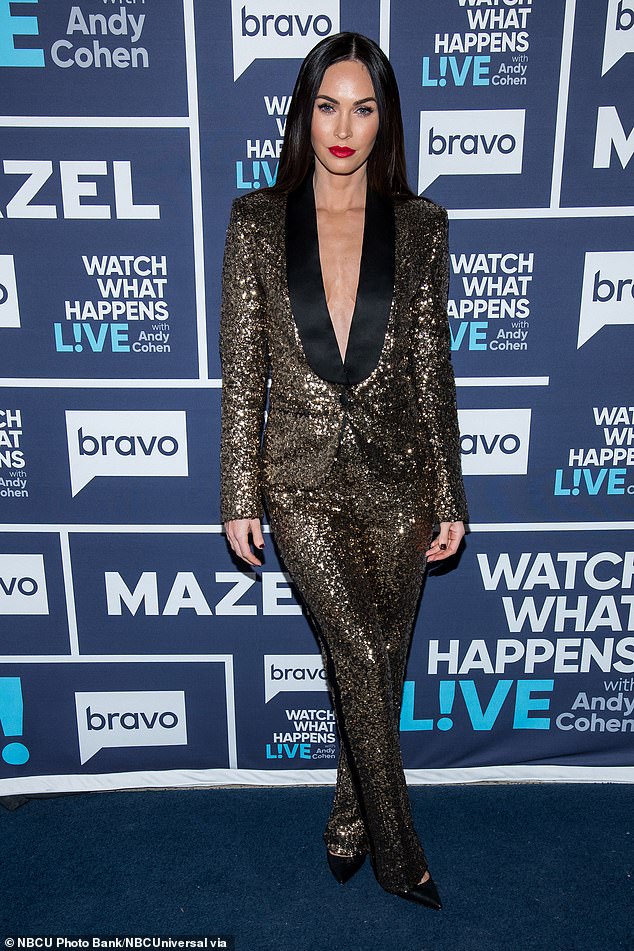 ‘Harrowing’: Megan Fox has spoken out about the stories circulating about her mistreatment by Hollywood and the media early in her career

In a long note on Instagram, Megan clarified some of the stories circulating and also talked about the ‘ruthlessly misogynistic industry’

Megan addressed the rumors of her mistreatment at the hands of directors Michael Bay and Steven Spielberg, who feature in several anecdotes circulating online.

Referencing the time Bay asked her to wear a bikini and dance under a waterfall in Bad Boys II, Megan wrote, ‘I was around 15 or 16 years old when I was an extra in Bad Boys II. There are multiple interviews where I shared the anecdote of being chosen for the scene and the conversations that took place surrounding it. It’s important to note however that when I auditioned for Transformers I was 19 or 20.’

She goes on to describe her experience auditioning for Transformers in response to fans who say she was taken advantage of.

‘I did ‘work’ (me pretending to know how to hold a wrench) on one of Michael’s Ferrari’s during one of the audition scenes. It was at the Platinum Dunes studio parking lot, there were several other crew members and employees present and I was at no point undressed or anything similar. 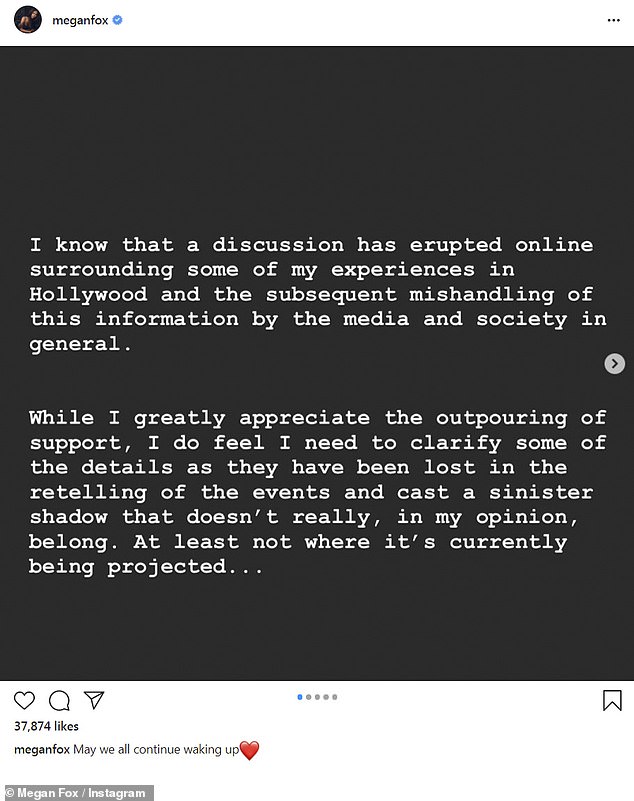 Greatly appreciated: The actress had a lot to say as she thanked fans for their support after highlighting the sexualization she’s suffered since she was a teen 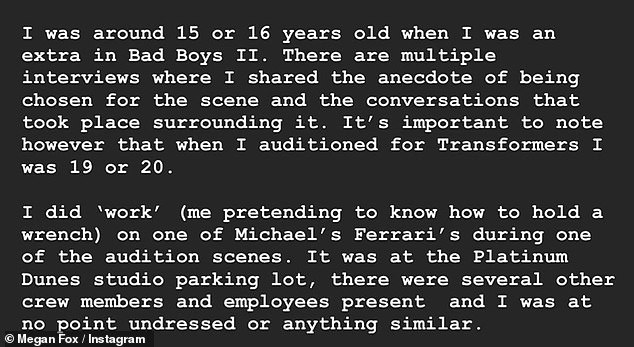 ‘So as far as this particular audition story I was not underaged at the time and I was not made to ‘wash’ or work on someone’s cars in a way that was extraneous from the material in the actual script.

‘I hope that whatever opinions are formed around these episodes will at least be seeded in the facts of the events.

‘When it comes to my direct experiences with Michael, and Steven for that matter, I was never assaulted or preyed upon in what I felt was a sexual manner,’ she continued.

Hinting at more traumatic experiences in the industry, Megan teased the ‘many names’ that ‘deserve to be going viral in cancel culture’.

‘I was never preyed upon’: Megan also addressed rumors of mistreatment at the hands of directors Michael Bay and Steven Spielberg, who feature in several anecdotes circulating online

Her lengthy post came after fans rushed to her defense after a 2009 interview with Jimmy Kimmel resurfaced on Twitter.

In the 2009 interview, Megan shared a disturbing story about being sexualized in a Michael Bay film when she was just 15 — but rather than sympathizing or seeming troubled by the story, Jimmy, now 52, cracks an inappropriate joke about her teenage sexuality.

Commenters called the clip ‘disgusting’ and ‘terrible,’ with one making a convincing case for how unfairly Megan was treated in Hollywood in her 20s. 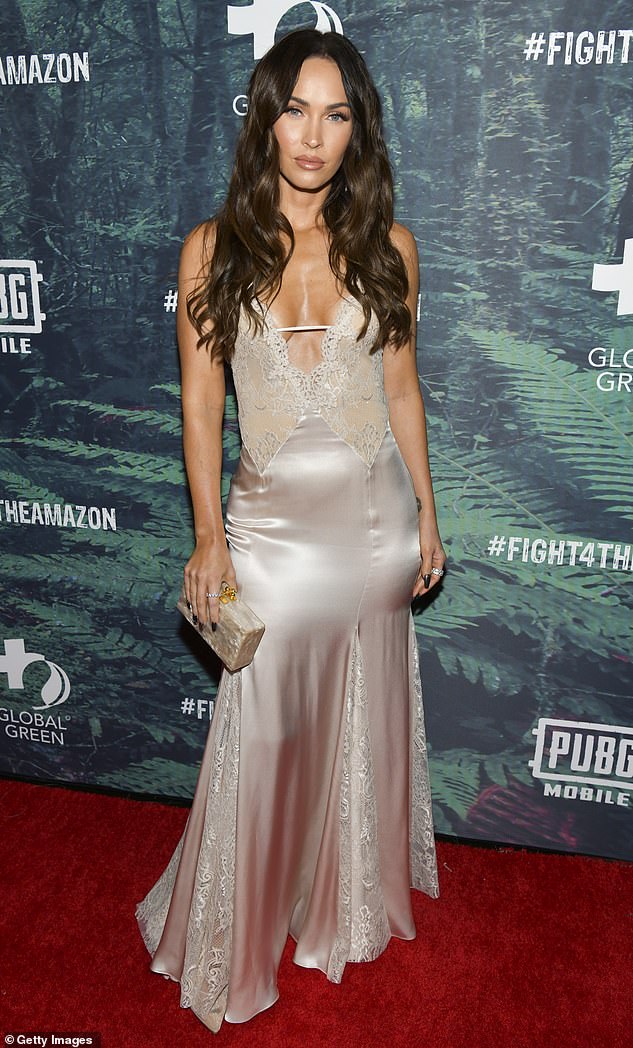 Outrage: Megan’s lengthy post came after fans rushed to her defense after a 2009 interview with Jimmy Kimmel resurfaced on Twitter in recent days 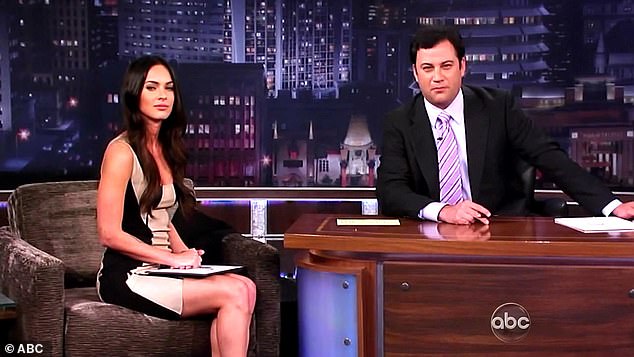 Re-examined: In a 2009 interview with Jimmy Kimmel, Megan shared how she was chosen by director Michael Bay to dance in a bikini under a waterfall at age 15 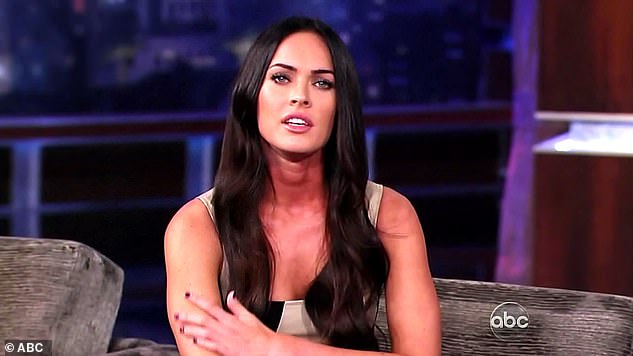 Yikes: When she tells the story, though, Kimmel replies with a sexual joke and the audience laughs

Twitter user Liz W shared the clip, which has been viewed over six million times.

‘Megan Fox tells a story about Michael Bay sexualizing her as a 15 y/o. The crowd laughs, and Kimmel makes gross jokes. Teen girls being preyed on by older men has never been taken seriously and still isn’t,’ she wrote.

In the clip, Megan recalled being on the set of Bad Boys II, for which her credit read ‘Stars-and-Stripes Bikini Kid Dancing Under Waterfall.’

‘I had just turned 15 and I was an extra in Bad Boys II. They were shooting this club scene and they brought me in, and I was wearing a Stars-and-Stripes Bikini and a red cowboy hat. And six-inch heels,’ she said.

‘And he approved it, and they said, you know, “Michael, she’s 15, so you can’t sit her at the bar and she can’t have a drink in her hand.

‘So his solution to that problem was to then have me dancing underneath a waterfall getting soaking wet,’ she concluded with a straight face. 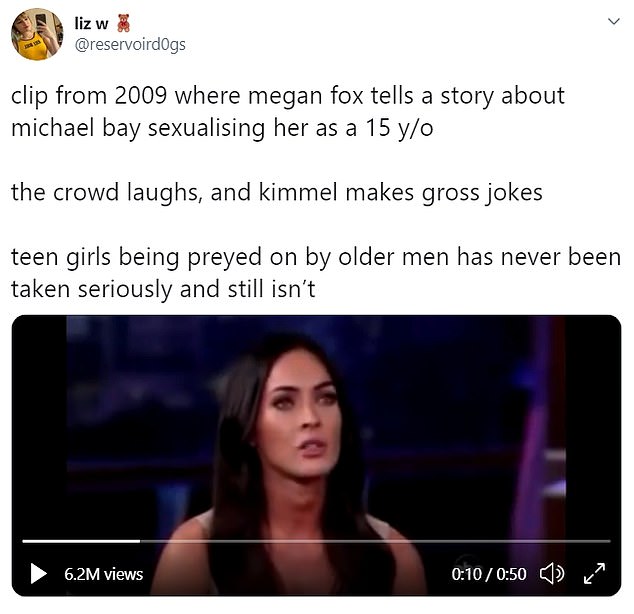 Not OK: Viewers are now looking at the interview with horror, pointing out that Megan was trying to share a troubling story and it wasn’t taken seriously 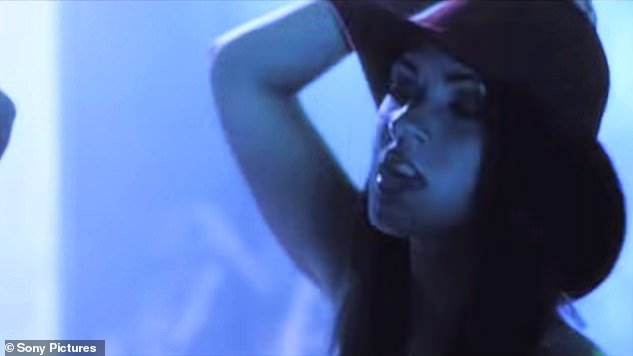 Flashback: Megan was 15 and in tenth grade when she filmed this scene in Bad Boys II 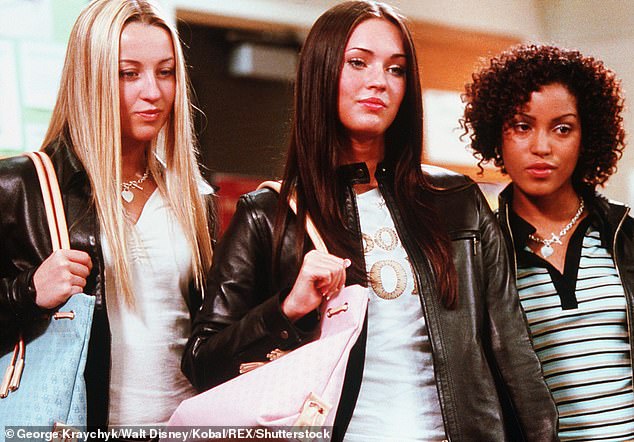 Movie biz: She appeared in Confessions of a Teenage Drama Queen the next year (pictured, 2004)

When the crowd laughed, she reiterated: ‘At 15. I was in tenth grade. So that’s a microcosm of how Bay’s mind works.’

Kimmel then responded: ‘Well that’s really a microcosm of how all our minds work.’

Megan looked uncomfortable, running her hands down her legs and cringing at the audience while Jimmy added that ‘some of us have the decency to suppress those thoughts and pretend that they don’t exist.’

The interview doesn’t appear to have spurred much outrage online at the time, but now Twitter users are expressing their horror at the way Megan’s experience was made light of.

‘His response is even worse what the hell,’ wrote one. And another: ‘WTF were they doing casting a 15 year-old as a bikini-wearing clubber?’

‘I think Fox’s reaction shows a lot,’ said a third. ‘She’s so clearly visibly upset by Kimmel’s reaction but can’t say anything to his awful joke. This is terrible to watch, it’s a kind of abuse in real time. Even a high star celebrity is not immune.’ 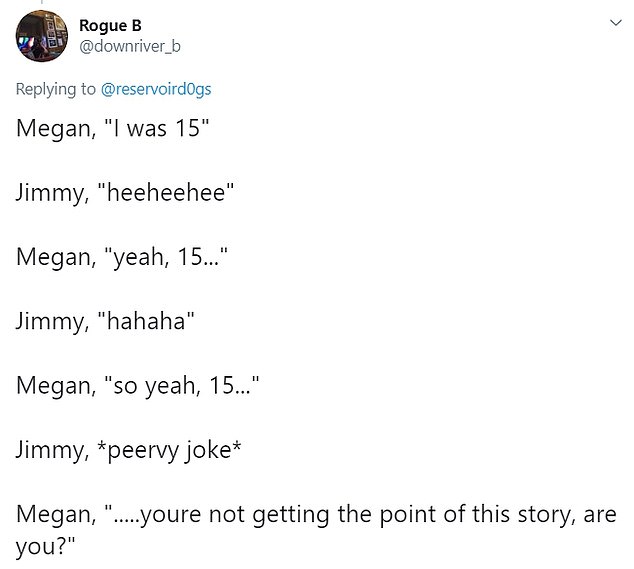 Speaking out: People are calling it ‘disgusting’ and ‘disturbing’

‘That single nod she did after his “joke” was the exact moment she realized all men are the same and it probably scared the shit out of her to get that response from a tv host with so much power,’ another agreed.

One more chimed in: ‘What an utterly disgusting take by Kimmel. Why is, “I’m so sorry that happened to you”, something that is beyond his imagination to say. Instead he offers, “We all have those thoughts, but we repress them”. God damn, she was 15. Who the Hell is “We”?

And yet another wrote: ‘The way Hollywood and the media treated Megan Fox in general was deeply disgusting.’

The thread appears to have inspired another one from Twitter user Ephraim Winslow, who shared a lengthy retrospective on similar instances from Megan’s career.

‘Megan Fox has been sexualized from the age of 15 when Michael Bay made her dance in a bikini and wash his car as part of her audition for Transformers. When she spoke out, she was labelled “ungrateful” by the media and her career was destroyed by Bay and Steven Spielberg,’ he wrote. 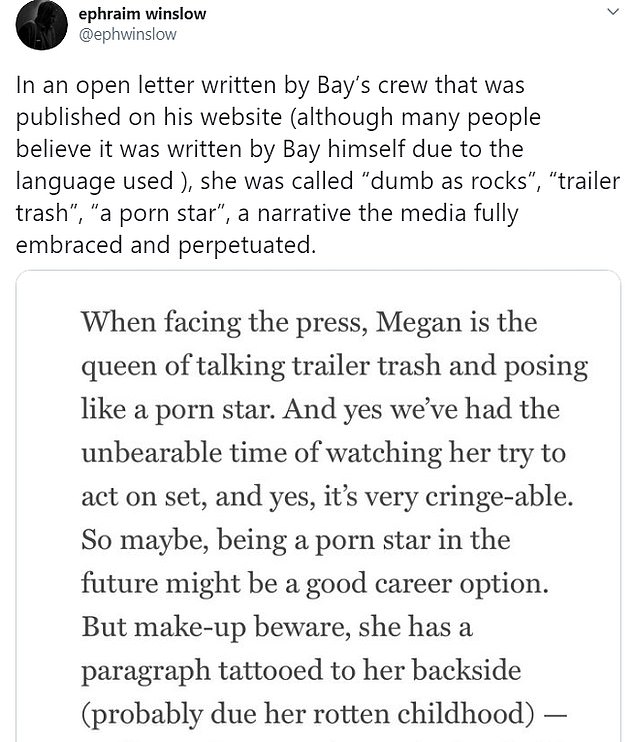 Looking back: The video inspired another thread about the ways in which Megan was mistreated in Hollywood 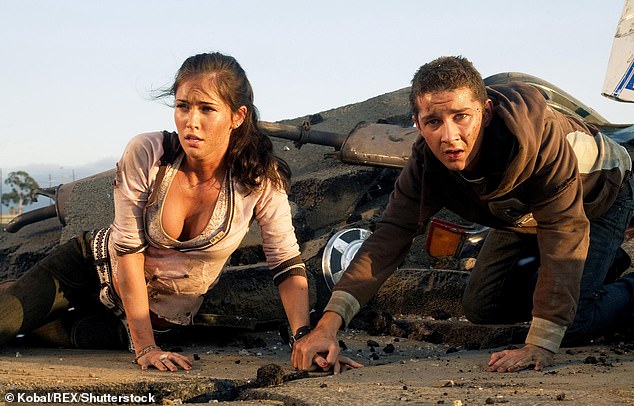 Megan is pictured in 2007’s Tranformers. In the sequel, Bay repeatedly told her to just ‘be sexy’ when she asked about her character’s motivations

‘Megan made extremely misguided comments about Bay that led to her getting fired by Steven Spielberg but I think it’s important to note that many other male actors have gotten away with far worse.

‘The media also did its best to make sure Megan was seen as a bad actress, although anyone who has seen Jennifer’s Body will tell you that is not the case. I wonder what her career would look like now if it wasn’t purposely destroyed by the industry because she dared to speak out.

‘On the set of Transformers 2, for which she received a Worst Actress nomination, Megan frequently tried to start a conversation with Bay about her character and her motivations in order to improve her performance. His response? “Just be sexy,”‘ he went on.

‘A scene in “Jennifer’s Body” required her to wear nude underwear / pasties. She was assured that the set was clear but one photographer — who received a tip about the nature of the scene — got on set and took photos.’ 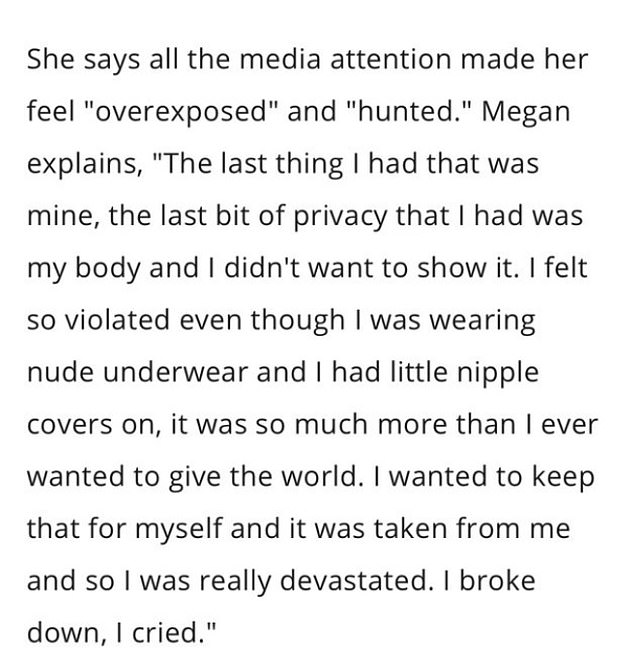 Not taken seriously: She was oversexualized at a young age, and when she spoke out and made objections, powerful people turned against her

Here, he included Megan’s response to the incident, in which she said: ‘The last thing I had that was mine, the last bit of privacy that I had was my body and I didn’t want to show it.

‘I felt so violated,’ she went on. ‘It was so much more than I ever wanted to give the world. I wanted to keep that for myself and it was taken from me and so I was really devastated. I broke down, I cried.’

In his thread, Ephraim says that Megan ‘was the victim of an industry that took advantage of and forced an image and a narrative onto her, and when she tried to stand up for herself, they ostracized her. The media was complicit and the general public just stood by and watched.’

‘I will never forget the interview where Megan said she didn’t want to speak up about her experiences in the industry in light of the “Me Too” movement because she didn’t think she’d be a “sympathetic victim” based on how she was treated in the past,’ he went on.

That interview was given to the New York Times in 2018, in which she said, ‘Even with the #MeToo movement, and everyone coming out with stories — and one could assume that I probably have quite a few stories, and I do — I didn’t speak out for many reasons. 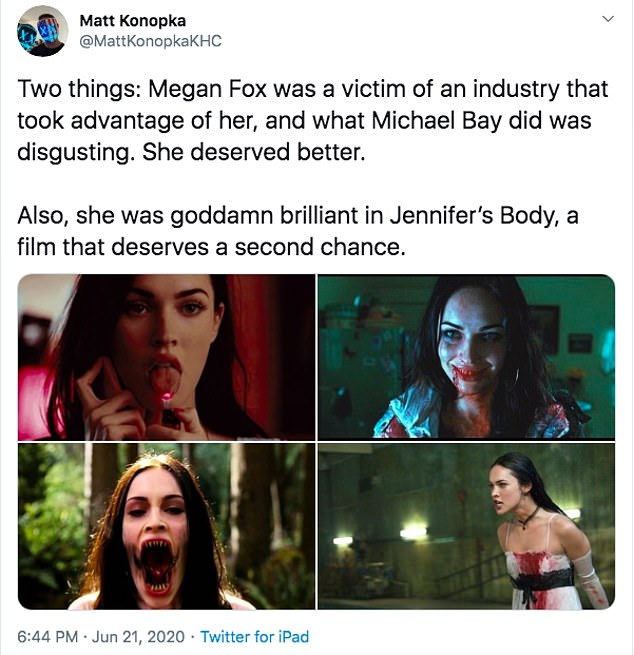 Justice for Megan! Ephraim’s thread, paired with the Kimmel clip, have some people looking at Megan anew

‘I just didn’t think based on how I’d been received by people, and by feminists, that I would be a sympathetic victim. And I thought if ever there were a time where the world would agree that it’s appropriate to victim-shame someone, it would be when I come forward with my story.’

Ephraim’s thread, paired with the Kimmel clip, have some people looking at Megan anew.

‘I feel like I’m looking at all of this information with fresh eyes. We should’ve fought for Megan Fox,’ wrote one.

‘Everybody failed Megan. It makes me so angry because she always has been outspoken about it and something should have been done but now feels like she can’t and it’s all so f***ed,’ wrote another.

‘Megan Fox deserved better than being overly sexualised from the time she was a child by male directors and then being blacklisted when she spoke up about it while those men continued having careers,’ tweeted yet another.