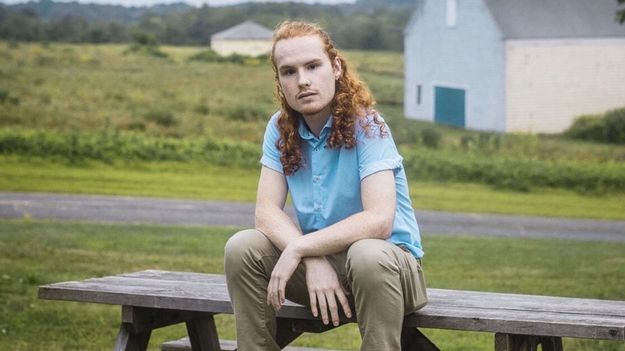 When 19-year-old Keagan Roberts woke up on Tuesday (November 5), he wanted to go straight to the polls — after all, it was Election Day. But because his car wasn’t working, he had to drop it off at the mechanic, go back home, and drive his mom’s car to the town hall. When he finally got there, polls had been open for 15 minutes and it was starting to rain.

“Hi. My name is Keagan Roberts. I want to thank you for coming out and voting today. Have a great day,” he said to each voter who walked up to the polling station in South Berwick, a town in Maine with a population of about 7,000.

Roberts was running for a seat on his city council, but he wasn’t on the ballot — he hadn’t actually decided that he wanted the role until after the deadline to be on the ticket had already passed. But rather than wait for the next election, he aimed for a more grassroots approach: The famed write-in candidacy. Voters would have to manually print his name on their ballots in order for him to garner any votes, so name recognition was key.

Despite knocking on about 200 doors, he was worried that his write-in candidacy might not succeed, which is why he made one last push at town hall. “I said [hello] to almost everyone who walked in the door. [It was] rainy out there, so I had to go home and dry my clothes off a couple of times, but I spent 10 hours at the polls,” he told MTV News.

As for missing the deadline, he chalks that up to weighing his options. “I was a write-in because being 19, I have a bunch of different paths ahead of me that I could go on, and I wanted to be sure that I was choosing the right one. And once I thought about it, I realized, ‘Yep. This is what I’m supposed to be doing. This is my calling,’” Roberts told MTV News.

Roberts currently works as a makeup artist and brow specialist at Ulta, a job he landed after taking a four-month volunteer trip to Bolivia following his high-school graduation. When that trip ended, he returned to Maine, got his cosmetology license, and decided that he could try to do it all. He would take classes in town, continue working as a makeup artist, and even be a member of the Town Council. Just one month before election night, he declared his candidacy. “If I work hard, I can make it all work at once,” he said.

That mantra stayed in his mind on election night. At 9 p.m., about an hour after the polls closed, he and other candidates learned who took home enough votes to land a space on the council. The town clerk announced that incumbent John Kareckas earned the top amount of votes, and would serve as the council’s chair. Roberts earned 20.5 percent of the vote, enough to secure his victory as South Berwick’s newest council member.

“I was shocked,” Roberts said. “I didn’t realize that I had that much of an impact on people.”

As a council member, his goals are, simply put, to learn.

“I’m kind of going in as a blank slate,” Roberts said, adding that he wants to “see how the town feels” about issues ranging from clean energy to the traffic caused by the lack of traffic lights downtown to proposed medical marijuana storefronts. For now, however, he’s just happy that South Berwick put their trust in him.

“The voter turnout just for write-ins — I was honestly just amazed at the dedication [and] the desire that people had for change and for a younger voice to be represented,” he said.

That’s key — “a younger voice.” He said that there aren’t many young people in local government in Maine, and that when his peers come back from college, “they don’t really feel like they’re being represented.”

“I wanted to represent my generation because we are the future,” Roberts said.

Who is Karen Gibson? Celebrity MasterChef 2020 star and The Kingdom Choir leader