Meet Bella, the adorable sheep who thinks she’s a dog 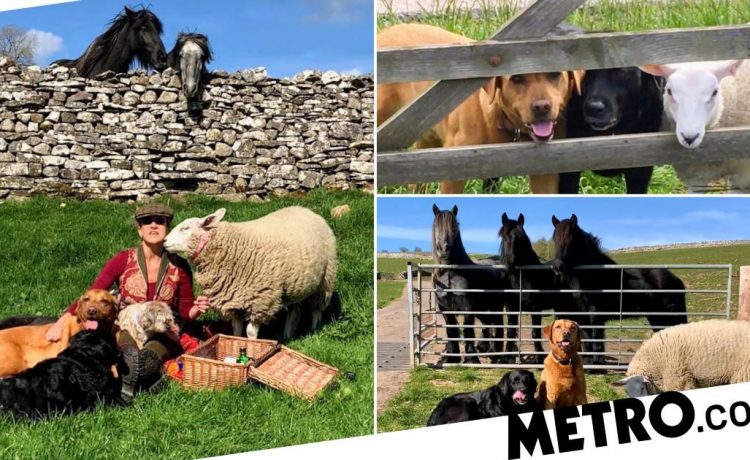 A sheep now thinks she’s a dog after growing up alongside family pets.

Baby Bella was taken into care by farmer’s wife Gilly Chippendale, after she was rejected first by her birth mother and then by several other ewes when she was a newborn lamb.

Gilly, who breeds Fell ponies, said: ‘We have over a thousand breeding sheep on the farm and there are always lambs who get rejected and often ewes who lose their own lamb, so the orphans get mothered onto them which they sometimes reject.

‘This is what happened to Bella, several times. I then brought Bella up to the stables to live with my ponies. This is how she began coming for walks with the dogs and following me around the farm.

‘She loves running behind the quad bike with the dogs.’

After growing up inside Gilly’s manor house in Cumbria – alongside the family’s seven dogs and one cat – Bella now doesn’t see herself as a sheep at all.

Instead she firmly believes she’s a canine.

In fact, she gets scared when fellow sheep approach her and will run away from the rest of the flock.

Gilly added: ‘Bella certainly doesn’t believe she’s a sheep. She’s never recognised herself as a sheep, she’s inquisitive but frightened of other sheep.

‘It’s very funny to see her walk past other sheep on our walks acting very aloof. She even runs away from sheep if they follow her.

‘I did once try to shut her in a field with other sheep but it had a footpath through it so she accosted all the walkers and ramblers, so they had to let her through the gate and then she’d come back up to the house.’

Bella can often be found camped on my doorstep waiting for someone to let her in the house and loves hanging out in the family’s hallways, kitchen, boot room and living room.

It was only recently that she learnt how to graze grass – as it seems she’s become accustomed to more exciting foods.

Gilly said: ‘She would only ever eat the grass on my lawn, and she’ll do almost anything for a hob nob biscuit or a bourbon cream.’

Who can blame her?


MORE : You can get paid to scroll through pictures of puppies with this Dog Test Subject job


MORE : Kitten dies and sister spends week in hospital after being taken from mum too early

READ  Online vet launches 24/7 service so you can look after your pet in self-isolation
Share on FacebookShare on TwitterShare on PinterestShare on Reddit
newsgrooveApril 2, 2021