Matilda the Musical on Netflix release date, cast, trailer, plot: When will film be out?

Matilda the Musical has become a mainstay on the West End stage since its London debut in 2011. It has been a huge success, and is based on the fantastical book from Roald Dahl, which has been adapted countless times since. Now there is new the musical will get a movie adaptation on Netflix – here is everything we know about it so far.

When is Matilda the Musical released in cinemas?

At present, the release date has not been announced, but there are some details we do know.

The film is expected to be filmed between August and December 2020, meaning the film will likely end up being a Christmas release the following year.

Matthew Warchus, who is directing the film, has plenty of experience given he directed the original stage musical, and has since directed movies such as Pride and Simpatico.

However, it has been revealed the movie will be shown in UK cinemas and available for home release, while it will be released on Netflix throughout the rest of the world.

READ MORE: No Time to Die theme: Is THIS when Billie Eilish’s Bond theme tune is out? BIG news

Who is in the cast of Matilda the Musical?

At present, the cast has not been revealed, as the team behind the adaptation are still looking for their Matilda.

A casting notice was released for the movie, asking girls between nine and 10, no taller than four foot and three inches, to apply.

They are also recruiting throughout the UK, so it looks as though the story will be set in the UK rather than in the USA, as in the original adaptation.

Mara Wilson, who originated the role of Matilda in the 1996 movie, has expressed a desire to take a cameo role in the movie, so she may pop up.

Warchus collaborators of the past have included Paddy Considine, Imelda Staunton and Bill Nighy, so it may be that we see some of these names crop up.

What is the plot of Matilda?

Matilda Wormwood is a young girl who discovers she has some fantastical abilities.

The young genius, who delights in reading books and learning, is mistreated by her parents, who only care about money and punishing their daughter.

Eventually, Matilda’s telekinetic powers begin to grow, and she demands to be allowed to go to school, where she meets some kind students and teachers, including Miss Honey.

However, the students are plagued by their vile, overbearing headmistress, Miss Trunchbull, who becomes one of the main antagonists alongside Matilda’s parents.

Will the Netflix adaptation include the music?

Tim Minchin has won countless accolades for his work on the music for Matilda, making it tied with Hamilton for the most Tony Awards.

As this adaptation requires a young girl with “a good singing voice,” it seems clear the movie will be a musical, and will be a full adaptation of Minchin’s version. 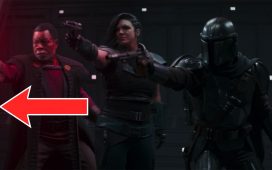 Wallaby on the loose spotted hopping around small English village