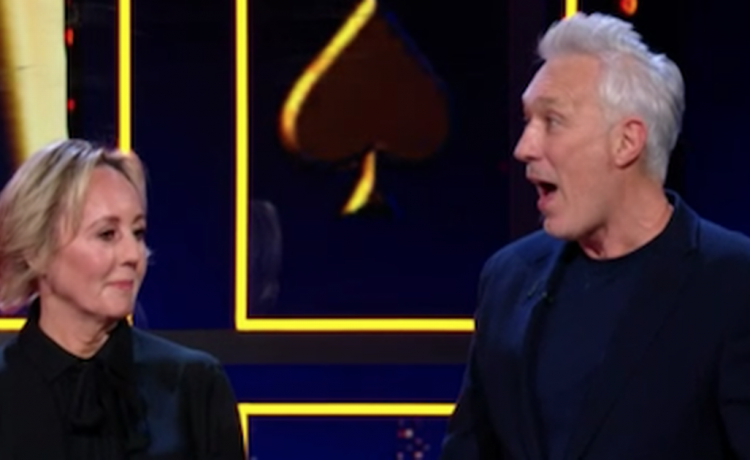 Martin Kemp and his wife Shirlie appeared on Alan Carr’s Epic Gameshow on Saturday night in a bid to win some money for charity.

Roman Kemp’s parents played against Strictly Come Dancing Nicola Adam and her girlfriend Ella Baig in a round of Play Your Cards Right.

During the episode, both celebrity couples had to decide how many people would rather binge-watch television or have a bit of ‘hows your father’ from a survey.

As Nicola and Ella deliberated on their answer, Shirlie admitted: “I’d rather binge-watch”.

Hubby Martin, 59, was lost for words and host Alan couldn’t help but make a joke out of the comment.

Viewers at home also rushed to their keyboard to discuss Shirlie’s confession.

A third person joked: “Doesn’t say a lot for Martin.”

Despite putting on a brilliant performance, Martin and Shirlie failed to make it through to the final round.

Nicola and Ella went on to go head-to-head with former Coronation Street’s actress Catherine Tyldesley and her husband Tom Pitfield, who beat Harry and Sandra Redkapp previously in the show.

Catherine and Tom ended up coming out and top and went on to the final to play for a whooping £30,000 for their charity.

The pair took plenty of risks throughout the tense round and managed to walk away with a total of £33,500, the jackpot prize and the £3,500 they’d previously won earlier in the show.

An emotional Catherine told Alan: “It’s amazing. I fell a bit tearful. It means the world.”

Fans rushed to their keyboards to congratulate the couple on their win.

Another added: “Yes a huge congrats to Cath and Tom for winning 30k for their charity very well deserved.”

A third person posted: “They were so brave. Well done Cath and Tom.”

Alan Carr’s Epic Gameshow first aired in 2020 and saw the comedian bring back plenty of old favourite gameshows, like The Price is Right, for both celebrity and non-celeb guests.