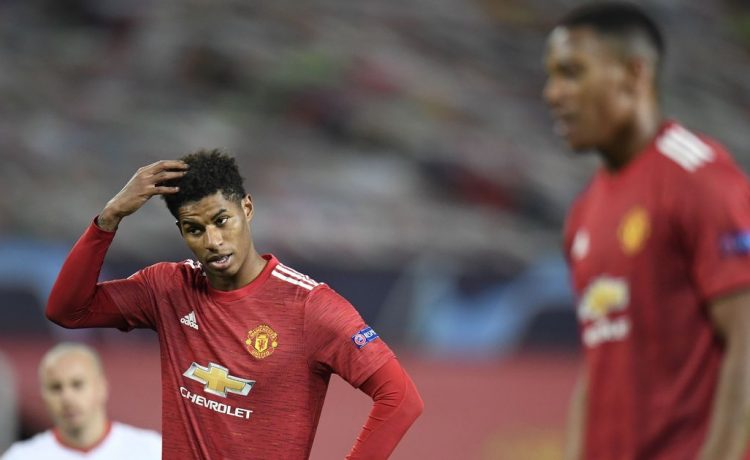 Manchester United forwards Marcus Rashford and Anthony Martial have been urged to step up their games by Red Devils legend Andy Cole.

Martial, 25, has scored twice in 12 Premier League appearances this season as he struggles to follow up his career-best haul of 17 goals last campaign.

The same cannot be said of his strike partner Rashford, 23, who has been in prolific form with seven league goals and 14 in all competitions.

But Cole, who helped Untied win eight major honours with his 121 goals, insists both in-form Rashford and misfiring Martial are capable of much more than their current output.

“He’s [Martial’s] super talented, he gets in great positions but sometimes his finishing is a bit erratic,” Cole told Sky Sports.

“He hits the goalkeeper, he doesn’t make the right decisions at times but he has all the talent in the world.

“I do genuinely believe, like Marcus [Rashford], he’s nowhere near his full potential.

“He just has to keep persevering and hopefully he’ll go on a good run.

“He’s another one that could get 25 goals, easily.”

Though he has struggled for form in the Premier League this season, Martial opened the scoring as the Red Devils beat Aston Villa 2-1 on Friday night.

“Anthony is going to improve. He is going to be better and better,” Solskjaer said after his side moved level on points with leaders Liverpool.

“He is still creating chances, he’s just not had that little bit of luck, margins in front of goal. They will come.

“We saw a better version of Anthony, a more confident one.”

Can Anthony Martial and Marcus Rashford fire Manchester United to the Premier League title? Have your say here.