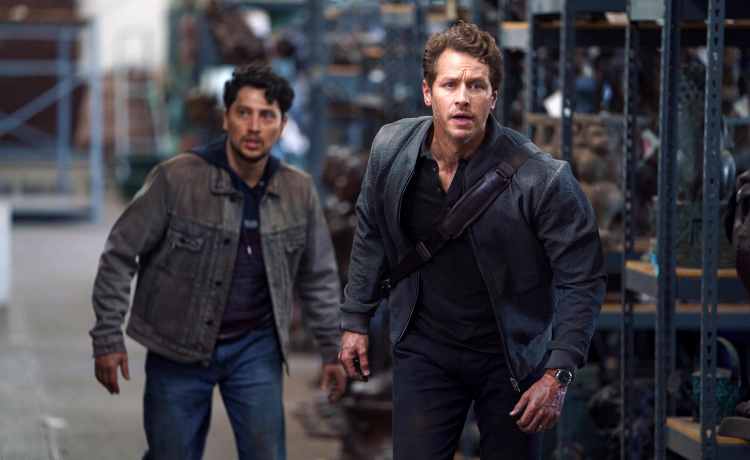 What also made “Wingman” feel like an Indiana Jones style archaeological adventure was the Al-Zuras papyrus being assembled at the university by Ben’s new assistant, who seems destined to bond with Olive. Manifest did a good job of tying threads together, too, such as the peacock feather being both in the woods with Cal and on the drawing of Ma’at, or the missing piece of parchment being in the urn Eagan stole from the illicit storage facility.

Or how about the mention of the “treasure hunt” in the childhood rhyme shared between Olive and Cal? Not only did the memory serve to further heal the wounds between Tarik and Grace as she told him about Cal’s sickness; it also appeared as a powerful new calling shared between the meth-heads, assuming that was Jace scraping the eyes out of Stone family photos. It’s almost impossible to guess where Manifest might be headed with this, but the possibilities are certainly compelling.

The strength of these arcs overshadowed what was a perfectly acceptable calling in season 1 of Manifest: the return of Evie’s heartbeat, guiding Michaela on a healing journey for her best friend’s mother, Beverly. It was fine, but using a macaroni necklace with the word “Brave” on it to bring Pete and Angelina together felt much more forced than the stories that surround it, as did the aforementioned “compulsion of fate” which made Michaela decide to care for Beverly in the home she just inherited from her.

But how about that Zeke, huh? His survival of the death date has had a transcendent effect, turning him into the most serene, perfect husband anyone could ask for. Manifest made the ultra-cool choice to subtly portray his sudden epiphany surrounding how to talk Beverly down from her meltdown with a shimmering effect, like heat coming off a street in summer. As with the impending treasure hunt, there’s nary an inkling as to why that’s happening, but we’re all in on the innovative concept.