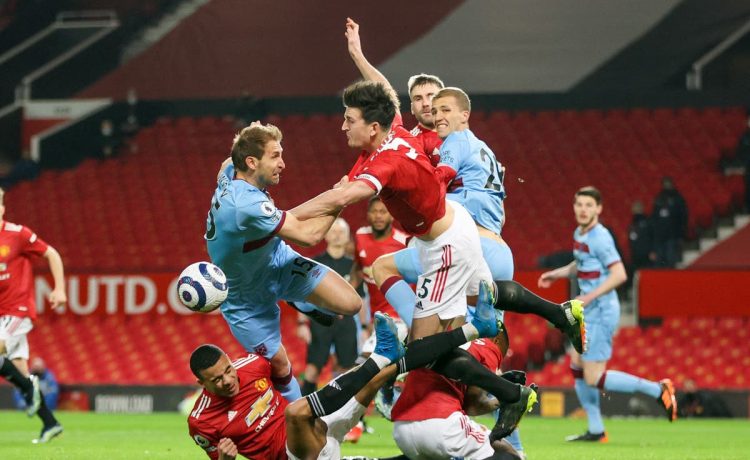 Manchester United are taking on West Ham United tonight in the Premier League as both teams aim to enhance their case for a Champions League berth. Ole Gunnar Solskjaer’s side fell to third in the table this afternoon following Leicester City’s win over Sheffield United, but can reassert their position in the top two with victory here. However, West Ham are only six points behind their hosts with a game in hand, so an away win tonight would really shake up the race for Europe.

Manchester United come into the game on the back of an impressive performance in the Manchester derby last weekend, where they ran out 2-0 victors. But a disappointing 1-1 draw against AC Milan in the Europa League in midweek stuttered their momentum slightly, when a late away goal took away victory. The Hammers meanwhile beat Leeds 2-0 last time out and have three wins in their past four games with their only slip-up coming against Manchester City.

Follow all the latest updates from the game below, after the conclusion of the North London derby.

39 mins: A quick cutting move from Manchester United almost brings them their reward. Henderson launches the ball into the midfield where a sharp pass sends it up to Fernandes. Greenwood runs into the box and collects Fernandes’ threaded pass before opening up his body and going for the bottom right corner. Lukasz Fabianski sets himself and leaps to the right as the shot comes in and he parries the ball wide of the post.

36 mins: Aaron Wan-Bissaka stops the West Ham counter with a strong sliding tackle on Michail Antonio. The Man Utd defender gets a yellow card for his trouble. Aaron Cresswell slots the free kick into the left side of the box and Declan Rice runs onto the ball. He squares the ball from the byline and Wan-Bissaka is there to clear it.

33 mins: Bowen wins the ball off Fernandes and storms forward on the counter attack. He sends the ball across the pitch to Rice who can’t control the ball and James nips back to take possession.

30 mins: Good hands from Fabianski. Shaw chips the ball into the box for Greenwood who brings the ball under control, weaves it around Rice and fires a pass into the six-yard box. Fabianski dives low to tip the ball away from the approaching Dan James and then smothers it when it comes back to him off Cresswell.

27 mins: Harry Maguire takes a knock to the face and needs a bit of treatment on the pitch. It looks like a glancing blow from Michail Antonio as they both try to win an aerial ball. He was down for a while but will continue.

24 mins: There’s a yell of frustration from Marcus Rashford after he misses a good chance for the home side. A mini counter-attack from Man Utd sees Mason Greenwood burst free on the right wing. He curls a cross into the back post where Rashford has the chance to head it into the back of the net. He goes for power and whips his head at the ball but only gets a glancing touch and sends the ball wide of the near post.

21 mins: Shaw darts into the box again for Man Utd but Tomas Soucek is back to make a sliding tackle and knock the ball out for a corner. Shaw swings the ball into the box, Diop and Maguire both challenge for the aerial ball with Diop winning the battle. It comes back out to Shaw whose cross back into the area is then cleared by Cresswell.

18 mins: Cresswell swings a cross into the box from the left for West Ham. Dean Henderson comes out to punch the ball but it takes a deflection and makes things awkward for the goalkeeper. He takes enough off the ball with his punch but goes through Bowen to clear it. The Hammers’ midfielder limps off the pitch but he looks likely to continue.

15 mins: Jarrod Bowen threatens to feed Michail Antonio free on the counter attack for West Ham but he’s clipped by Fred in midfield and the attack breaks down.

12 mins: Bruno Fernandes tries to feed the ball into Marcus Rashford on the edge of the box but he can’t bring it under control and the ball rolls away where Lukasz Fabianski tidies up.

9 mins: A Luke Shaw cross from the left is headed away by Aaron Cresswell. Man Utd maintain their pressure but the Hammers get men behind the ball and force the error from Scott McTominay as he misplaces a pass.

6 mins: A one-two between Luke Shaw and Marcus Rashford over on the left hand side gets the Manchester United left back into the left side of the penalty area. He cuts the ball to Mason Greenwood who turns the ball towards goal but can’t generate any power on the shot and Lukasz Fabianski scoops it up.

3 mins: West Ham win an early corner and Mark Noble flings it into the box. Harry Maguire and Craig Dawson come together in the box and both fall over Aaron Wan-Bissaka who slipped. The ball flies over all of their heads at the back post and goes out of play.

Kick off: The visitors get the game started. When they arrived here earlier this year West Ham fell to a 1-0 defeat in the FA Cup fifth round. Can they go one better tonight?

Man Utd come into the game in third place but can move back up to second if they win. If the Hammers take all three points they’ll draw level on points with Chelsea and have a game in hand on the fourth placed side.

Man Utd have won only one of their six home league fixtures against the teams who begin the weekend in the top half. Nonetheless, they could score three goals or more in four successive home matches for the first time since September 2011.

The Red Devils are looking to keep four consecutive league clean sheets under Ole Gunnar Solskjaer for the first time.

The Hammers have claimed 26 points from their past 12 games, five points more than Manchester United. They have 48 points after 27 league fixtures – double the amount they had at this stage of last term.

West Ham can equal their Premier League club record of seven away wins in a season.