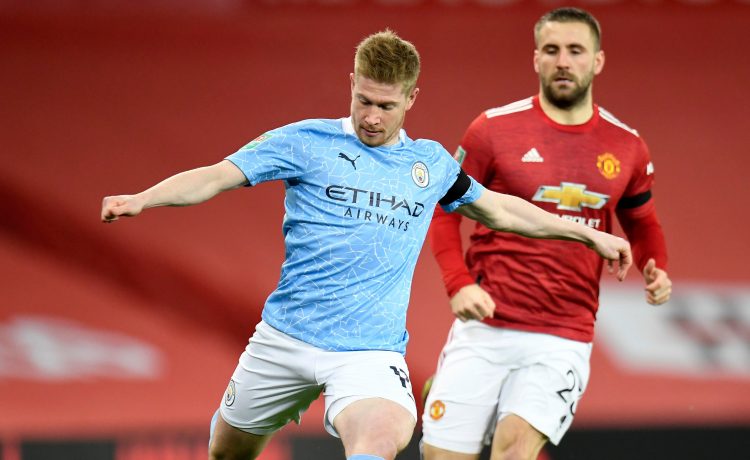 Guardiola: ‘We were back like we were two or three seasons ago’

Both sides come into the tie in terrific form, with United able to go three points clear of Liverpool at the top of the Premier League if they win their game in hand. Since being knockout out of the Champions League by RB Leipzig, Ole Gunnar Solskjaer’s side are unbeaten in their last seven matches and defeated Everton 2-0 in the quarter-finals to secure their place in the final four. They will be without striker Edinson Cavani, though, who is still serving a three-match ban as United aim to win their first piece of silverware under Solskjaer.

Meanwhile, City are finally beginning to resemble the team of old that dominated English football. Pep Guardiola’s side are unbeaten in 11 matches and have clawed back to within four points of Liverpool and still boast two games in hand. However, City have been rocked by a coronavirus outbreak that saw their fixture against Everton postponed and their training ground closed. Ederson, Gabriel Jesus, Kyle Walker, Ferran Torres and Eric Garcia were all absent from the matchday squad for City’s terrific victory over Chelsea last time out, while the club confirmed earlier today that Scott Carson and Cole Palmer have now also tested positive for the virus. Follow all the action live below:

45+1 mins: Half time. Unstoppable force meet immovable object. Nothing to separate the two teams over the opening 45 minutes. Man Utd have held off Man City who have only really come close through a Kevin De Bruyne strike that hit the woodwork. All to play for in the second half.

43 mins: It’s very congested around Man Utd’s penalty area and City can’t find a way through. Gundogan plays a one-two with Cancelo and tries to break through the middle but loses the ball. Mahrez then attempts to chip the ball into Sterling but the cross is cleared as well.

40 mins: Zinchenko plays a simple pass to Mahrez who is then fouled by McTominay in the middle of the pitch. Man Utd have done well to marshall City so far. Their attempts on goal have dried up in the last 10 minutes or so.

37 mins: Sterling is played into the right side of the box. He’s got Foden and De Bruyne up with him. Shaw holds his ground and Sterling collides with him, going to ground after the impact. There’s a faint appeal for a penalty but referee Martin Atkinson waves play on.

35 mins: McTominay fancies himself from distance as the ball comes across to him. Gundogan triess to cover but can’t get there in time but it doesn’t matter as McTominay smokes one well over the crossbar.

32 mins: The quick tempo of the opening stages has gone from the game. Fred floats a nice pass over the top for Rashford running through the lines. He tries to bring it down in the box but can’t control it and the ball skips through to Steffen.

29 mins: The ball is switched out to Rashford on the right wing. He takes it into the box and passes it back to Martial. Martial could shoot be decides to flick it back to Pogba who is then tackled trying to reach the pass.

26 mins: Man Utd win a corner after Dias blocks the ball and puts it out behind. Shaw takes the set piece and it’s headed wide of goal.

24 mins: Mahrez’s corner is played short to Gundogan before he gives it back to Mahrez for a better angle into the box. He puts in the cross and Pogba heads it away for the home side.

Oleksandr Zinchenko releases Foden down the left wing as he makes a run in behind. Foden takes the ball, runs into the box and slots it through the legs of Henderson to score. Only for the offside flag to go up again!

21 mins: Manchester City are dominating possession as expected. They’ve seen over 75% of the ball in the opening 20 minutes or so. De Bruyne chases down a chipped ball over the back line and wins a corner.