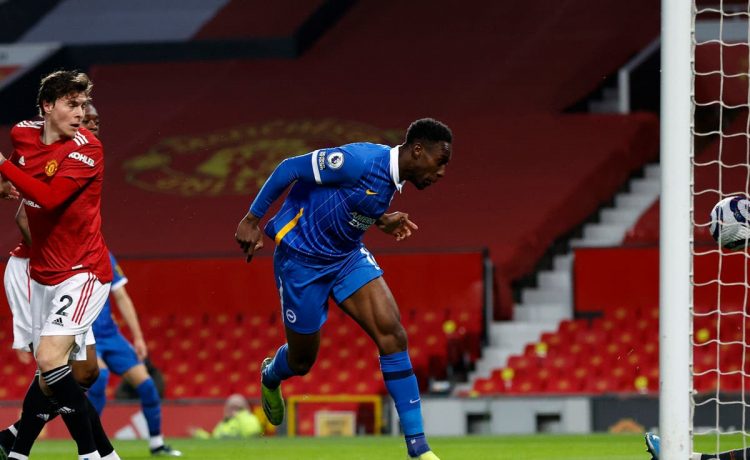 Manchester United welcome Brighton and Hove Albion to Old Trafford this evening as the hosts’ pursuit of an unlikely Premier League title continues, while their visitors look to increase the distance between themselves and the bottom three.

Ole Gunnar Solskjaer’s United are second in the table, 17 points behind leaders and rivals Man City with nine games remaining – but with two games in hand over Pep Guardiola’s side. Brighton, meanwhile, sit in 16th place, five points off the relegation zone with a match in hand over most of their fellow strugglers. While United suffered an FA Cup quarter-final defeat by Leicester City before the international break, they are unbeaten in their last nine top-flight outings, while Graham Potter’s Seagulls are seeking a third straight victory in the Premier League following positive results against Newcastle and Southampton.

United may be lacking a cutting edge this evening, with Anthony Martial sidelined and fellow forwards Marcus Rashford and Mason Greenwood injury doubts for the fixture. They may be able to count on Edinson Cavani, however, and Bruno Fernandes – a frequent goalscorer from midfield – though Victor Lindelof could miss out in defence. Follow live updates from Manchester United vs Brighton in the Premier League below.

45+2 mins: Half time. Brighton take a comfortable one-goal lead into the break. The visitors have marshalled Man Utd well, they’ve hardly allowed the home team to get away any shots on goal. Good work from Brighton so far, Man utd need a rethink.

45 mins: A corner from Gross is missed by Welbeck but it drops to Jakub Moder who snatches at his shot and puts it wide of the post. Two minutes of added time to play in the first half.

42 mins: Fred sets Bruno Fernandes away but he’s stopped by Pascal Gross wrapping his arms around the United midfielder. It’s an easy yellow card for Mike Dean to pull out.

39 mins: There’s a mighty cry of frustrations from Paul Pogba as he sends a chance wide of goal. Rashford drives the ball into the box and it deflects off Gross into Fernandes. He lays it off for Pogba who doesn’t open his foot up enough and sends his effort from the edge of the box wide of the near post.

36 mins: A bit of innovation from Pogba to flick the ball over the top through the middle almost comes off for Man Utd as Rashford darts into the box but Robert Sanchez sees the danger, sprints off his line and plucks the ball out of the air before it reaches the Man Utd striker.

33 mins: Man Utd just can’t find the space to get shots away, Brighton’s defenders on top of them quickly whenever the ball comes into the penalty area. Rashford gives the ball to Fernandes who attempts to thread Shaw in behind but over hits his pass and puts the ball out of play.

30 mins: Brighton have men back behind the ball when Man Utd are in possession which means it’s tough for them to get broken down. Man Utd don’t help matters by moving the ball slowly around the final third. There’s no injection of pace, no-one making runs off the ball, it’s all just a little tepid at the moment.

24 mins: Adam Lallana gets into the United box with a driving run. He attempts a one-two to get past Aaron Wan-Bissaka but the return ball is too far away from him to collect. Brighton look pretty confident out there. They’re enjoying themselves.

21 mins: Man Utd look the most dangerous when they get the ball out to the left wing. Shaw is in fine form and is willing to fire crosses into Edinson Cavani in the box. This time though the ball goes over Cavani’s head and Brighton clear.