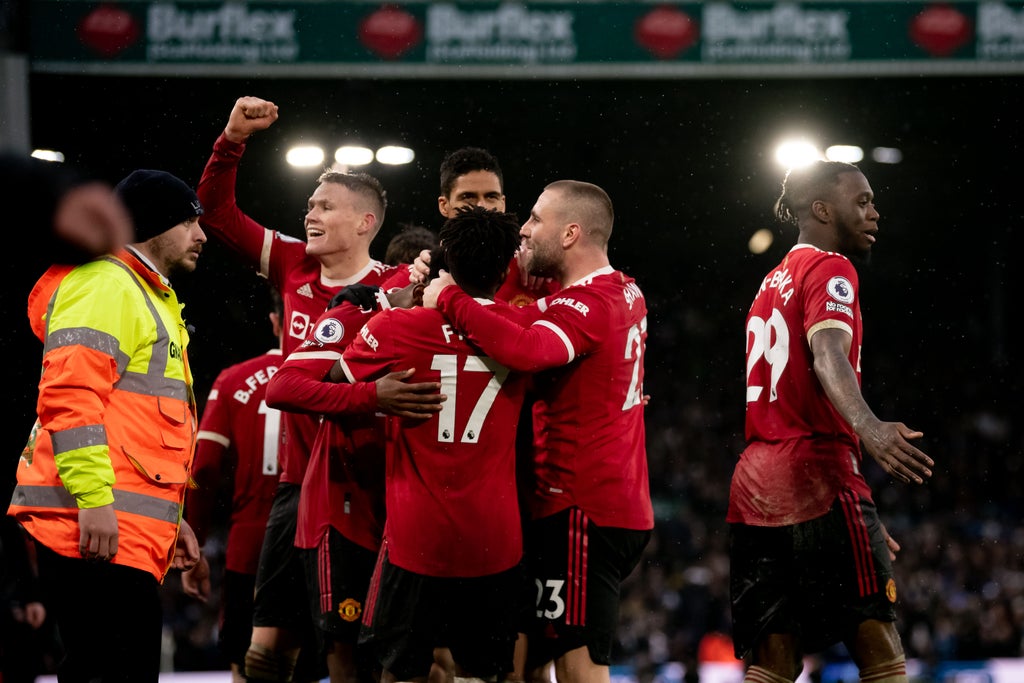 Ralf Rangnick and Marcelo Bielsa no doubt had carefully laid plans coming into this fixture. But as they embraced at the end of a madcap 90 minutes, glasses cloudy and drenched to the bone, they might wonder why they bothered.

Everyone has a progressive tactical system until they get gale force winds in the face. And for all the fine-tuning done in the week ahead of this meeting between one side looking up and the other looking down, Manchester United’s triumph by four goals to Leeds United’s two was down to being able to keep their feet above the water. Along with the bruises and knocks to assess, it wouldn’t be a surprise if those who took part are checked for trench foot.

Conditions at Elland Road were akin to what the rest of the country has experienced over the last 48 hours. Indeed this game felt like a series of tumbling trees, clattering road signs and both teams flying about the turf like greenhouses threatening to cascade into their own houses. As Leeds came back from 2-0 down at half-time and the home crowd were at their raucous best, this felt like a return to the 90s, when every game between these two carried grudges all over the pitch.

That Manchester United ultimately came through was down to a superior quality that was not necessarily going to shine through in this weather. And the key proponents were Paul Pogba and Jadon Sancho – two wheelie bins flying majestically above it all.

For most of Sunday afternoon, Pogba seemed impervious to the driving rains and the sodden conditions underfoot. First touches were often followed by crunching challenges, every pass just short followed by one too long. Bearings had to be recalibrated with each passing minute, and yet Pogba was the only one making amendments ahead of time, like the only man who checked the forecast before leaving home.

Bielsa’s decision to pick Adam Forshaw over Raphinha spoke much of wanting functionality over flair, but the former merely served as the control experiment. The starkest comparison for Forshaw came when his one-on-one duel with Pogba was taken wide to the left. Pogba brought play to a standstill before an un-telegraphed twitch of his right foot took him beyond the 30-year-old and to the edge of the box.

Cristiano Ronaldo’s botched finish robbed Pogba of an assist to go with the four he managed in Manchester United’s opening day 5-1 against these opponents.

His languid legs trapped and won the ball off almost every player in white who wanted to battle. No player came close to his influence in the first half. And even his removal on 67 minutes, after strikes from Rodrigo and Raphinha 59 seconds apart to get Leeds back level, felt like an error of judgement from Rangnick. Nevertheless, whether playing for a summer exit or a new deal, this was one of Pogba’s most influential showings this season.

Sancho, meanwhile, lasted the course, gliding throughout and turning into the odd skin like a Formula One car on slick tyres. You could argue his performance was a little bit more emphatic than Pogba’s given the influence on the final scoreline.

His chipped cross for Bruno Fernandes’s header came after a neat one-two to encourage Victor Lindelof’s driving run before receiving an extra “one” from the defender for his assist. Similar awareness came for Fred’s winning strike when he set the Brazilian through on goal from the edge of the box. And beyond the on-ball quality was an unerring responsibility to work just as hard towards his own goal.

Indeed that last part underpins why and how Manchester United were able to successfully navigate the literal and metaphorical storm. The second half was the kind of battle that would seem beyond a group of players who have been indulged in their own civil wars since Rangnick came in for his interim spell. The latest episode has included an apparent tussle for leadership in the dressing room which has been momentarily been put to rest with Harry Maguire – armband on his sleeve – heading in the opening goal.

Indeed the only fighting evident on Sunday was with their opponents. Fernandes’s relentless niggle to now go with six goals in this fixture has no doubt elevated him to villain status from a Leeds perspective.

Was this a show of Manchester United’s mentality? It’s hard not to answer in the affirmative given the resilience on show. They put in the most robust tackles – “winning” the foul count 19 to 13 – and the heated stand-offs. All in keeping with what was at stake on the day and for the rest of the season. With Arsenal and Tottenham Hotspur winning on Saturday, and with three games in hand, establishing a four-point cushion in fourth ahead of West Ham was a necessity.

The club remains a long way off from where they need to be. But at a time when they are lamented for being far from what they were, this display in a blood and guts throwback meeting with a bitter rival could be a nod to brighter times ahead.