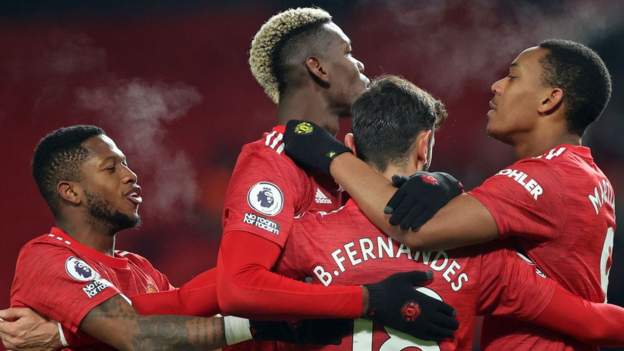 Fernandes drilled his 11th league goal this season – and his fifth from the spot – into the bottom corner to punish Douglas Luiz’s clip on Paul Pogba and hand United an eighth win in 10 games.

But Fernandes’ penalty extended United’s hold over Villa – they have now won 32 and lost just one of the past 44 league meetings between the sides – and leaves Liverpool top only by virtue of goal difference.

Villa might consider themselves unfortunate not to have left Old Trafford with at least a point from a thoroughly entertaining game but they also needed several fine saves from Emiliano Martinez to keep them in it.

After Fernandes’ spot-kick put United back in front, Martinez superbly tipped a stinging 25-yarder from the Portuguese on to the crossbar as well as denying Martial a second.

Martinez’s counterpart David de Gea was just as busy, with a late save from Matty Cash’s long-range strike preserving the points, not long after Tyrone Mings had headed wide a glorious chance to level.

READ  Newcastle fans 'confused and heartbroken' after takeover collapses
Share on FacebookShare on TwitterShare on PinterestShare on Reddit
newsgrooveJanuary 1, 2021