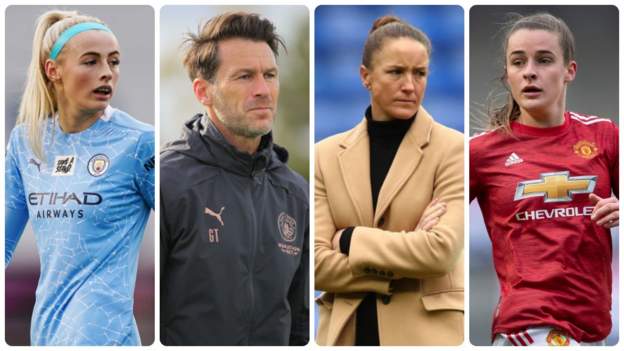 Manchester City boss Gareth Taylor says he “wants the city to be blue” after they play rivals Manchester United, with both clubs chasing the Women’s Super League title.

City are third in the table, two points behind United with a game in hand before Friday’s match (19:00 GMT).

The teams played out an exciting 2-2 draw at Leigh Sports Village earlier this season in November.

“We spoke before the Arsenal game that these were going to be two pivotal games in our season. That hasn’t changed. But I still think both teams will be in the title race regardless of a draw, a win or a loss.

“Obviously we’re really keen, especially on our home patch, to make sure we get the three points. Everybody wants to be successful. We want the city to be blue after these occasions, with the bragging rights and everything that goes hand-in-hand.”

City midfielder Caroline Weir, who scored a stunning long-range strike in a 1-0 win at Etihad Stadium in the first Manchester derby to be held in the WSL in 2019, said “it’s a game you want to play in”.

“I’ve played in a few and this is probably one of the biggest ones I will play in, in terms of what’s at stake and the way the season and the table is shaping up,” she added.

“It’s big. It’s tight at the top and we’re coming into an important time of the season. We know we have to win pretty much every game. There is a little bit more pressure because it’s a derby but we will just focus on our job.”

‘I believe in my squad’

City go into the match in terrific form having picked up six league wins on the bounce since facing United in November, scoring 25 goals and conceding only three.

Manchester United manager Casey Stoney described them as “one of the best teams in the league right now in terms of their consistency” but hopes her side can bounce back from a shock 2-0 defeat by Reading on Sunday.

“Look at the depth in their squad and the money they have spent. They are really hitting form now,” said Stoney. “It’s going to be a very difficult game but the best game you can have after a defeat in terms of wanting to bounce back.

“We have to do the hard work, commit to the game plan and get our press right. We need to make sure we go in with full belief that we can win the game.

“I believe in my squad. We will give it everything to try and win.”

How is the title race shaping up?

Leaders Chelsea’s shock defeat by Brighton last weekend was followed by a crushing 3-0 win over Arsenal on Wednesday, but the WSL title race is still wide open.

Arsenal have fallen behind, having also suffered two losses to City and a defeat by United in November.

There are five points between leaders Chelsea and third-placed City but Stoney says “it is definitely not a three-horse race” and has not ruled Arsenal out.

“[Arsenal] have games in hand and Sunday’s result shows everyone is still in it,” she added. “That showed on any given day in this league points can be taken off someone.

“To have that many teams involved, be that close and that tight, is fantastic for the women’s game. There is lots of football and lots of games to be played. Who knows what can happen?”

Stoney said Friday’s game will not “define the season” but she “would put Manchester City up there in the moment in terms of form, favourites and the way things are going”.

Taylor added: “There’s a handful of teams who have been in contention. It’s highly competitive. A lot of teams have strengthened and that has made the competition even better.

“We’re enjoying being involved in the title race. It kind of feels like the final push now even though we have just got over halfway. You can see the finish line now and everyone is making a real charge for it.”