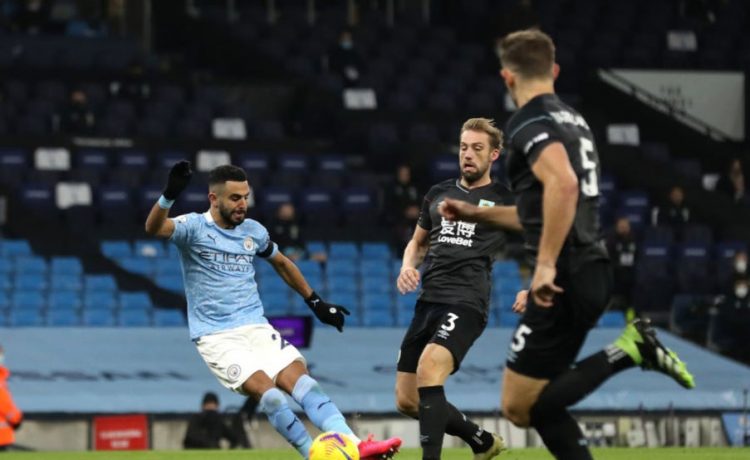 Pep Guardiola’s side strolled into the Champions League knockout stages during the week thanks to a 1-0 victory against Olympiacos. However, City have endured a somewhat of an indifferent start to their domestic season, taking just 12 points from their opening eight games, leaving them in 14th place. A victory today, though, would see them surge back into the top half of the table.

Meanwhile, Burnley finally brought their disastrous run of form to an end, securing their first win of the campaign against Crystal Palace. Sean Dyche’s side have still accumulated just five points, though, and seem destined for a grinding relegation battle after a disappointing summer transfer window sold the manager short. Follow all the action below live at the conclusion of Brighton vs Liverpool:

McNeil breaks forward down the left but takes too long to cross. When the ball does come in, it’s easily cleared.

City have the ball in the net again, but it won’t count. A cross is floated into the box and Jesus’ header deflects off Torres, standing just in front of the striker. It deceives the goalkeeper and rolls in off the post. But the linesman does well to notice that Torres is in an offside position.

De Bruyne almost catches out Peacock-Farrell, who’s off his line and has to backtrack to tip the Belgian’s attempted cross (which may actually have been an audacious shot).

That was a poor goal to concede from Burnley’s perspective. They already seem to be in damage limitation mode now, wary of suffering another heavy defeat at the Etihad.

Brilliant from Mahrez! Taylor and Mee switch off from a throw-in, allowing the Algerian to receive the ball in the box, cut onto his left foot and sweep clinically into the far corner with the help of the post.

Now Walker has a go from distance, blazing his effort over the bar. City are dominant, but they’re perhaps still lacking their usual fluidity in the final third.

Mahrez plays a short corner to De Bruyne and gets the ball back. The goal scorer then slides a pass into Stones, whose shot is blocked.

More intricate football on the edge of the Burnley box from City, but the visitors defend in numbers and stop Torres in his tracks.

Burnley’s strategy is clear: be direct and make the game a physical battle. They’re doing it more successfully now but falling behind so early on has given them a mountain to climb.

Mahrez is lively again, latching onto a ball over the top of the Burnley defence. He tries to head the ball into the path of Jesus but sends it straight at the goalkeeper.