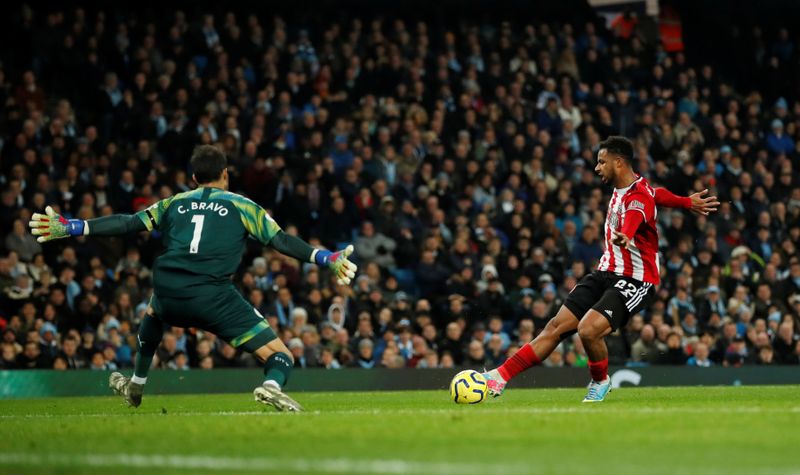 MANCHESTER, England (Reuters) – Manchester City got back to winning ways on Sunday with Sergio Aguero and Kevin De Bruyne on target in the second half as Pep Guardiola’s side beat Sheffield United 2-0 at the Etihad Stadium in a Premier League game which saw yet more VAR controversy.

It was another impressive performance from Chris Wilder’s promoted side, who were unbeaten away in the league, but in the end third-placed City’s sharpness in front of goal was decisive as Guardiola picked up his milestone 100th Premier League win.

His century was achieved in 134 games, a Premier League record that bettered Jose Mourinho’s 100 in 142 games.

United began strongly and looked to have grabbed the lead through Lys Mousett in the 28th minute but the goal was ruled out after a VAR review found the slimmest offside margin.

Moments later both sets of supporters expressed their opposition to the VAR system in a loud, united chant.

“Yet again we had another goal disallowed by VAR, that’s about eight or nine over the weekend, this is not a situation helping the game with the small margins,” said Wilder.

“But I will leave that for everyone else to talk about because I have said too much about it.”

Third-placed City, beaten 3-2 by Wolverhampton Wanderers on Friday and now still 14 points behind runaway leaders Liverpool, finally went ahead in the 52nd minute through Aguero, who blasted the ball home after being slipped in by De Bruyne.

The United players argued furiously that the ball had struck referee Chris Kavanagh during the build-up and a drop ball should have been called but after a brief review the goal stood.

The images suggested Kavanagh merely obstructed a United player rather than made contact with the ball but Wilder said commonsense should have been used.

“We talk about the new rule where if the referee touches the ball then he has to blow up, so surely if he is in the way and hinders us then he makes a sensible decision,” said Wilder, whose side are eighth on 29 points after 20 games.

“If he made the sensible decision then I don’t think anyone in the ground would have said anything about it.”

City wrapped up the win, which leaves them a point behind second-placed Leicester City who have 42, in the 82nd, when De Bruyne drove home after a swift counter-attack by Riyad Mahrez.

“Today I realised, why Sheffield are in the position they are in the table and didn’t lose one game away,” said Guardiola.

“We had problems (but) in the second half we were much better and in these type of games if the first ‘goal’ was not offside it would have been very difficult. Fortunately we could score two goals and win.”

Disclaimer: Fusion Media would like to remind you that the data contained in this website is not necessarily real-time nor accurate. All CFDs (stocks, indexes, futures) and Forex prices are not provided by exchanges but rather by market makers, and so prices may not be accurate and may differ from the actual market price, meaning prices are indicative and not appropriate for trading purposes. Therefore Fusion Media doesn`t bear any responsibility for any trading losses you might incur as a result of using this data.
READ  1 in 7 are unable to pay essential household bills, warns Citizens Advice