Cancer is something I’ve seen coming since I was a child. I watched my mum die of it. The mental image of her tiny, frail body lying on a mattress as I kissed her goodbye is one that I have tried my best to block out.

When I was given the news, just over two years ago, that I had advanced bowel cancer, I felt oddly unsurprised. ‘I’m turning into my mother,’ I think I joked at the time to a consultant, who didn’t see the funny side.

You see, although losing Mum when I was so little was horrific, I grew up surrounded by illness – and it held no mystery for me. 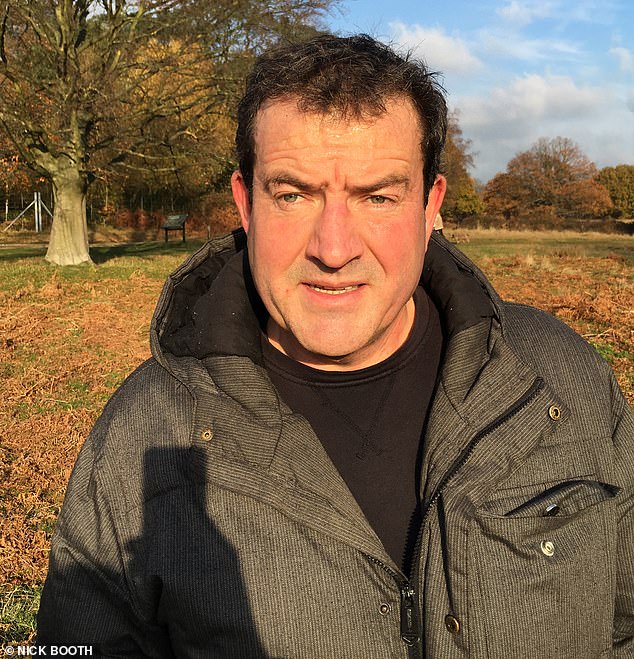 Nick Booth, 59, pictured, was told by a consultant two years ago that he had advanced bowel cancer and following two years of aggressive treatment he was told that the condition was terminal

She was a nurse and my father was a GP, who ran his practice from our home. Patients were always trudging through and my parents used to keep their urine samples in our fridge.

Given the news that now I was unwell, I simply put my faith in the doctors to blast and cut away my tumours as best they could. I’d be back on my bike in no time, I thought.

But it didn’t turn out that way.

There was a lengthy stab at quite aggressive treatment – I spent the summer as an inpatient at the Royal Marsden Hospital in West London, which I took to calling ‘my summer residence’.

Then, last month, at the age of 59, I had more bad news. The oncologist said to me, earnestly: ‘If there is something you’ve always wanted to do, I’d do it now.’

We both knew what she meant. I wasn’t going to get better.

‘We can get you a palliative care referral,’ she added. Coming from a medical family, I knew that could only mean one thing. 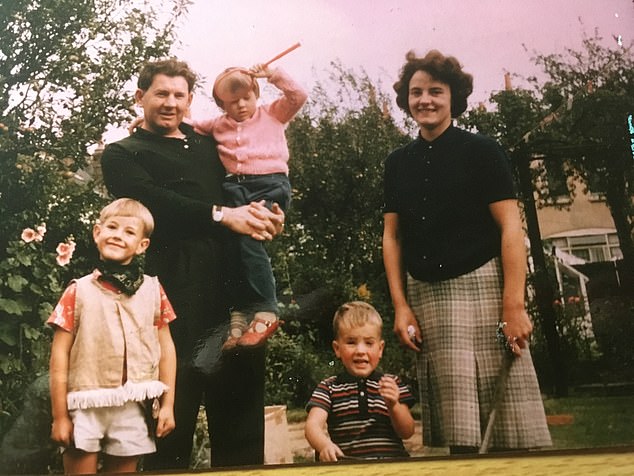 Nick Booth, pictured with his mother Cynthia, and his father, who was a GP, grew up in a medical family so knew exactly the significance of being sent for palliative care

I’m in the middle of a divorce and living in my younger sister’s back room – a self-employed writer with few savings. Sooner rather than later, I’d have to go into a hospice. And that was a prospect that made my blood run cold.

You see, although hospitals and GP surgeries are something I was unafraid of, hospices were something else. My older sister – a hard-nosed, stern woman whom I grew not to like much – worked in a local hospice. I associated them with a cabbage-like stench and crumbling paintwork. I hated the idea.

But soon, there I was, standing in the hospital corridor with a referral letter in my hand, detailing the facilities of St Christopher’s Hospice in Sydenham, South London. I burst into tears.

Whether I liked it or not, it was to be my new home, the last, I suppose, I’d ever live in. I was, as they say, down among the dead men.

Given my apprehensions, I was relieved to discover that hospices have changed quite a lot in the past 30 years. At St Christopher’s, there’s a bright, buzzy cafe, delightful gardens and even a gym.

If I had to find an equivalent, I’d say it’s rather like an above-average airport hotel.

My first thought was how much they’d make, should they rent it out for wedding receptions. ‘I was half-expecting the Grim Reaper to be waiting for me in reception,’ I told Lisa, a kind receptionist who greeted me like an old friend.

She actually laughed, which was a good start.

The words ‘death’ and ‘dying’ didn’t make an appearance. Nor did the expected plastic-encased mattress on which I imagined I’d be forced to live out the rest of my days.

Once signed in, I was told I could visit as an outpatient – for appointments, or simply to use the facilities – whenever I pleased.

I expected I would be wheeled in, assigned a bed and that would be it. In fact, most of the patients referred to St Christopher’s are like me, visiting on an outpatient basis. 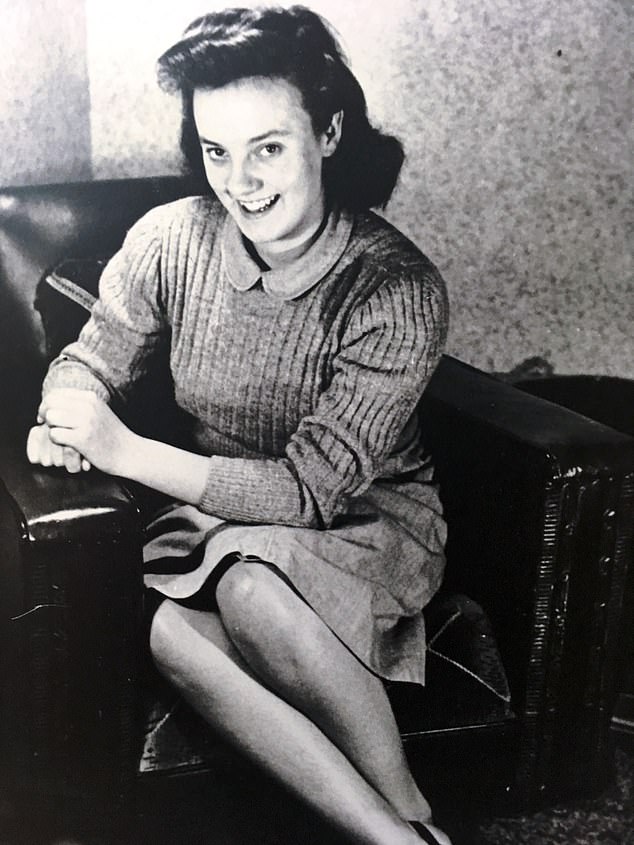 Cynthia Booth, pictured, was a nurse. According to Nick, she died of cancer when he was young

When it gets to the point when I am too ill to make it out, I can arrange for the hospice nurses to care for me at home. The team can also help to rearrange furniture in my house and provide medical equipment I may need. Or, if I want to, I can ask to stay and occupy one of their 38 beds.

There’s no set timescale on this – it’s all up to what they, and I, feel would be most helpful at any moment in time. In the meantime, there are personal trainers working in their gym, I discovered, and even a wandering masseuse, offering free treatments to anyone who wants one.

Emily, who works at St Christopher’s, tells me: ‘There’s a weekly event schedule including activities for the whole community, from knitting to art classes.

‘People are never short of something to do to take their mind off things.’

Tomorrow I’ll return for my third appointment, this time with a counsellor, for a session of cognitive behavioural therapy which I’m told will help me relax.

I never thought I’d say this, but I think I’m looking forward to it.

For the first time in almost a year, I have indeed been able to get back on my bike again and enjoy 2½-mile rides.

It’s pretty astonishing, given that just a month ago I was walking with the aid of a Zimmer frame and toppling over on various London buses.

It’s all because the experts in pain management at St Christopher’s appear to have tackled my most pressing problem – which even top specialists couldn’t wrap their heads around.

The boils set up camp on my feet – and the agony kept me awake almost every night for three months.

I often struggled to get out of bed, let alone venture out of the house.

I was referred to a wound clinic, where they patched me up and sent me home with a few painkillers. But the pain continued.

After one, hour-long session with the St Christopher’s pain-management specialists, I walked away with a bespoke prescription of pain-killing skin patches. And within a few hours, they worked.

The pain specialist tells me that the difference lies in their expert knowledge of analgesics, and the power of different combinations for attacking specific problems.

While cancer doesn’t often hurt me, there are plenty of complications, from treatment and from the disease itself.

Ulcers are common, usually on the mouth – as are infected wounds, nerve pain and muscle aches.

Emily tells me that many of their patients are specifically referred for help with one symptom: breathlessness or nausea, for instance. And they can swoop in any time, regardless of how long you’ve got left. ‘Some patients might be discharged and then might come back a year later,’ says Emily.

‘If you’ve been diagnosed with a life-limiting or terminal illness, and are in the local catchment area, you can use our services at any time.’

Now that my feet are back in use, I’m heading to the St Christopher’s gym weekly for circuit training, alongside a handful of fellow patients. One of them is in his 80s and, despite living in a hospice, he’s very much fighting fit.

These places can help you live longer

Oddly, embracing the hospice may even help me live longer.

I’ve not yet been given a use-by date, but the message from my doctors is ‘every day counts’.

In 2010, a study involving patients with terminal lung cancer found that those receiving palliative care, including hospice admission, lived on average two months longer than those in standard treatment.

Another, older, study looking at patients with 16 different terminal diagnoses found that end-of-life care gave some patients an extra 69 days.

But most importantly, a wealth of research shows hospice patients to be far happier.

A 2011 study revealed that delivering palliative care to advanced cancer patients three months before death can slash the incidence of depression in half.

Melanie Hodson, head of information support at charity Hospice UK, says: ‘The beauty of a hospice is they’re able to take into account all the facets that make up a person, socially, physically, emotionally and spiritually.

‘They have a smaller number of patients, so can go that extra mile to provide what we call wrap-around support from a wide range of professionals.

‘As well as tending to the patients staying over, this includes coming out to people’s homes to do things they may struggle with, such as walking the dog.’

I was particularly surprised at the hospice’s interest in my mental health. Few of the swarms of health professionals I’ve seen over the past year have been that bothered.

Perhaps it’s due to my lifelong tendency to block out painful experiences, by cracking inappropriate jokes. But given the permission by the kind counsellors, I’ve started to talk about my feelings regarding the inevitable – seriously.

And it’s not filled my head with depressing thoughts about dying.

Instead, the palliative carers have helped me prioritise.

I don’t have a bucket list, but I’d like to use the time I have left constructively – planting a garden at my local railway station as a tribute to the medical staff who’ve helped me, for instance.

But most of all, I’ll just try to be a bit nicer to people.

My diagnosis, coupled with the impending divorce and the loss of my home, had turned me into a bit of an angry old bloke.

But now I know my days are numbered, there’s no time for being grumpy. Especially when it comes to the people I love.

Perhaps I’ll start with my sister…

You can check out… and its free

Each one of Britain’s hospices serves a catchment area – patients will be referred by their oncologist and palliative-care team to their local facility.

Referrals can be made to a hospice in another area if it is close to family members.

It is possible to self-refer by contacting the service directly. However, the staff will want to discuss the case with the patient’s medical team before accepting the referral.

There is no such thing as a right time for hospice support. Patients who are diagnosed with a life-limiting illness can do so at any time. It is possible to use the service intermittently – say, for a temporary stay – and then check out and return home. And, remarkably, the service is free.

In August, Prime Minister Boris Johnson pledged to invest £25 million in palliative care across the UK.

Currently, only a third of the funding for hospices comes from the NHS. The rest is raised via fundraising, charity shops and donations. 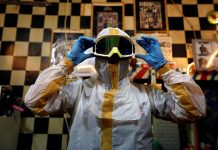 How coronavirus changed the world in three months – video

Coronavirus: WHO chief urges end to 'politicisation' of virus 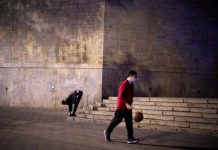 Coronavirus: Why do we talk about 'fighting' illness?