Madden 20 is just around the corner, with a regular edition release date of 2 August.

﻿It is already available via EA Access and our review tests out all the new features.

One of the best ways to improve your Madden game is to find a playbook that works for you. Every playbook in Madden 20 has a decent core of standard plays. Each team’s playbook is already aligned to the players on their roster and is a good place to start.

However, when you are heading into the world of MUT or Franchise league play, you don’t always have the same players available.

Below, we have outlined below what playbook you should try based on personnel and the style of team you want. 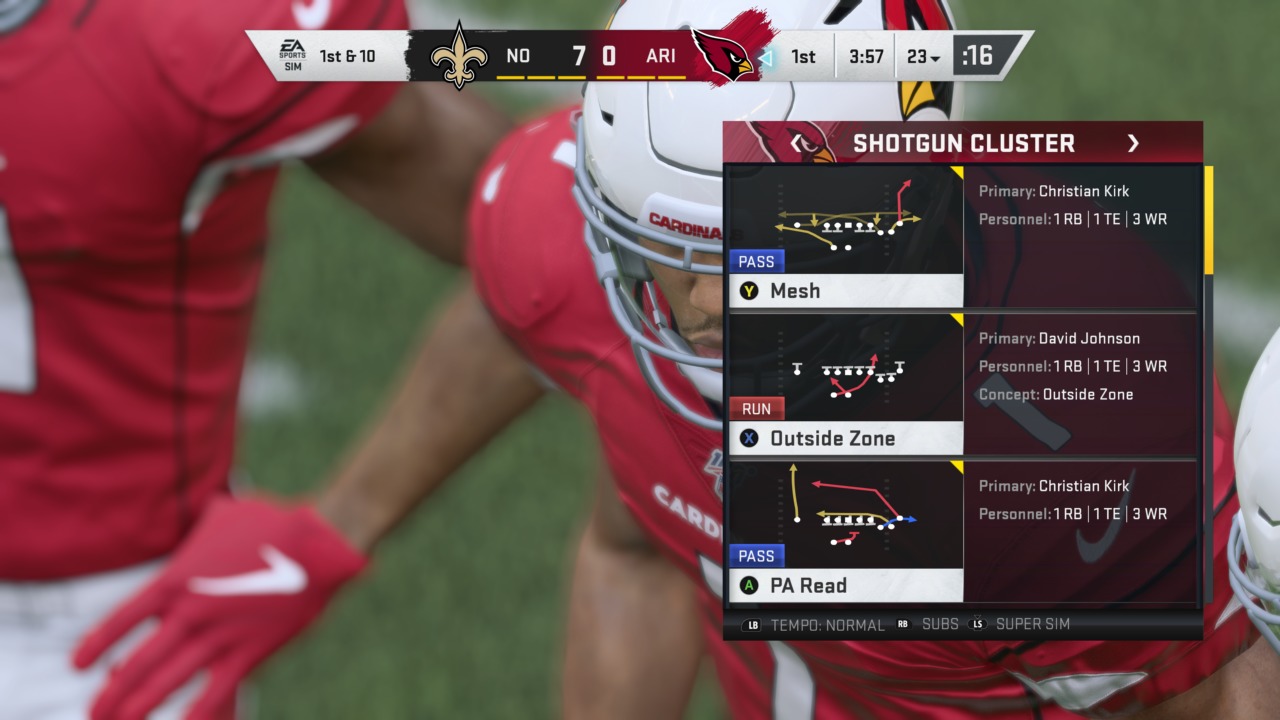 There should definitely be an honorable mention to the New England Patriots on this list, but with the addition of Kliff Kingsbury to the league it might be time to try something a little different. Kingsbury joins from the college ranks where he was head coach of Texas Tech. He comes with a reputation for bringing a pass heavy coach with a strong understanding of the spread offense.

There are lots of fun shotgun formations, with a lot less single back. Shotgun cluster is an exciting new package where the TE is not attached to the line and is very popular in the college ranks. A receiving TE and HB will thrive under these spread style plays with lots of short yardage opportunities.

There are a lot of HB motion plays, and will really benefit a team where your QB is accurate but not the big time player that you want to rely on to make 50 yard bombs. 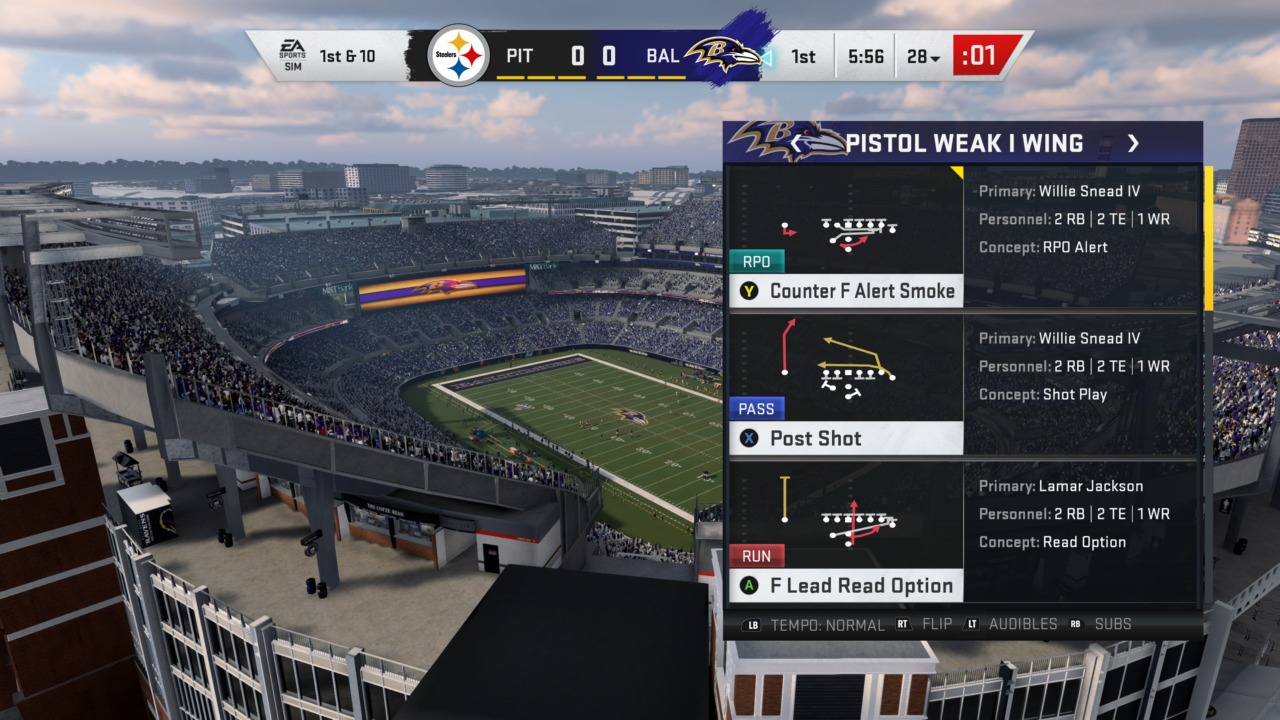 This is a new playbook to most lists this year in Madden, purely down to its uniqueness. Starting with Power I Strong, you will have 3 HBs on the field and there will be no doubt you are running the ball – the definition of hard nose football.

There are 11 formations of Pistol in this playbook, which really benefits those with a mobile QB. This playbook is made for the likes of Lamar Jackson, but if you have a QB that likes to wheel out and make something happen, there are plenty of option plays to keep the opposition guessing.

That said, there are still plenty of shotgun formations, and there’s plenty of versatility that will allow you to jump between styles of play mid-game. 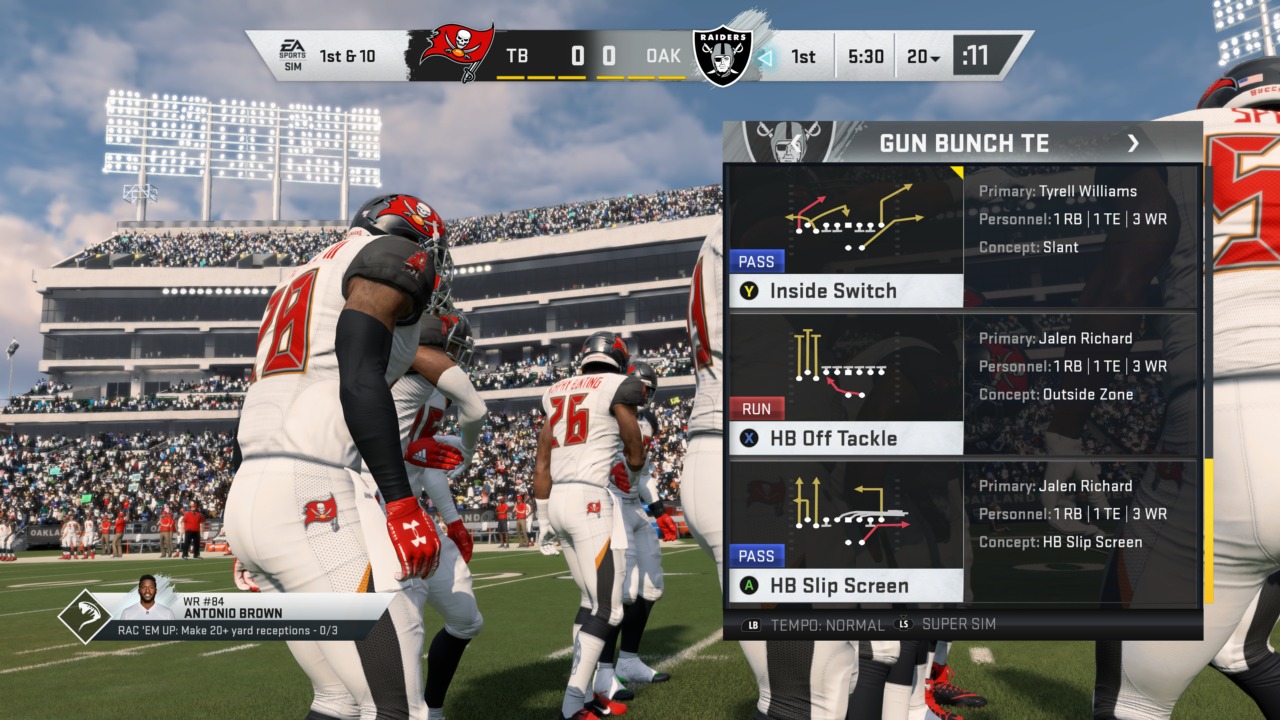 Despite the team’s recent performances, there seems to be consensus this year in Madden 20 that this playbook is the most powerful for offensive football. With the return of Jon Gruden last year, this playbook has been overhauled to reflect the tactical mind of the head coach.

It is absolutely loaded with shotgun plays, with one of the better Gun Trips TE packages in the game – which is a go-to for a lot of players. You will have the ability to jump between Gun Bunch TE and Gun Bunch with the same personnel, just changing the focus of the outcome you’re trying to achieve. This is something valuable when trying to play an opposition that is reading your formations to diagnose your plays.

The playbook doesn’t ignore the run, there are some great Singleback formations such as Singleback Wing Tight U that allows you to smash the ball, but also Jet Sweep and Jet Sweep fake – there’s some incredible versatility to this playbook that means we expect a lot of early adoption whilst people figure their preferred styles out. 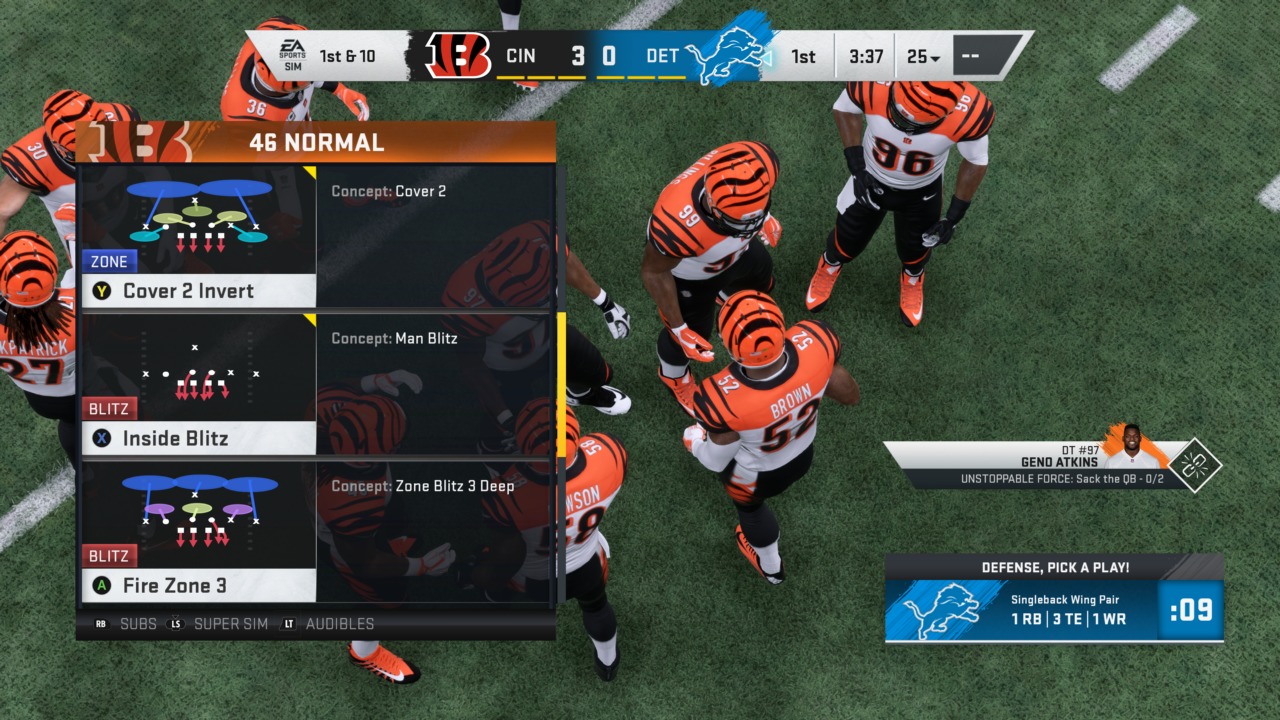 If you have a team with a smaller defensive front and speed rushing DE’s then it’s likely you’re looking for the best option of a 4-3 defense. It’s always very tricky when choosing between 3-4 and 4-3 as transitioning players can take a while in both MUT and franchise.

The Bengals can change easier as they come with a 4-3 base but with the handy addition of a 46 option, standard nickel, nickel 3-3-5 and dime set. There’s nothing in this playbook that will shock an opponent, but for versatility and the simplicity of learning a defensive playbook I don’t think they can do better than the Bengals.

The 46 package can be lethal, it subs your 3rd and 4th CBs for your OLBs and the 3-3-5 set is powerful when spying a fast QB.

READ MORE: Everything you need to know about Madden 20 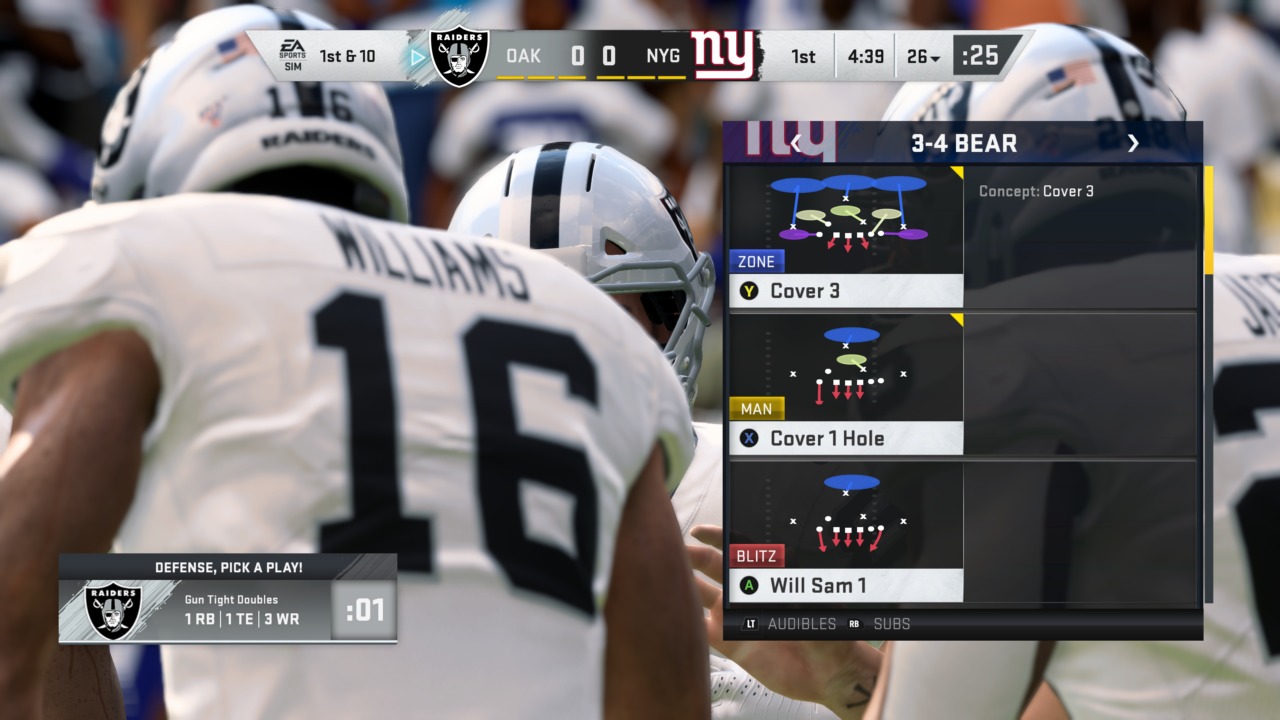 What makes the Giants playbook different is that is has the 3-4 base, but they also have 4-4, nickel normal, nickel 3-3-5, dollar and big dime 2-3-6. This level of versatility on defense is powerful.

This level of adaptability requires versatile personnel that can be subbed in and out based on the situation and therefore requires learning to be fully effective, but when you do, it will be hard for opposition to expect your moves.

Even within the 3-4 base there are 5 different fronts to show the opponent; odd, under, over, even and bear. Then add in the 4-4 for obvious rushing plays and you have some options in the front 7 and 8.﻿ 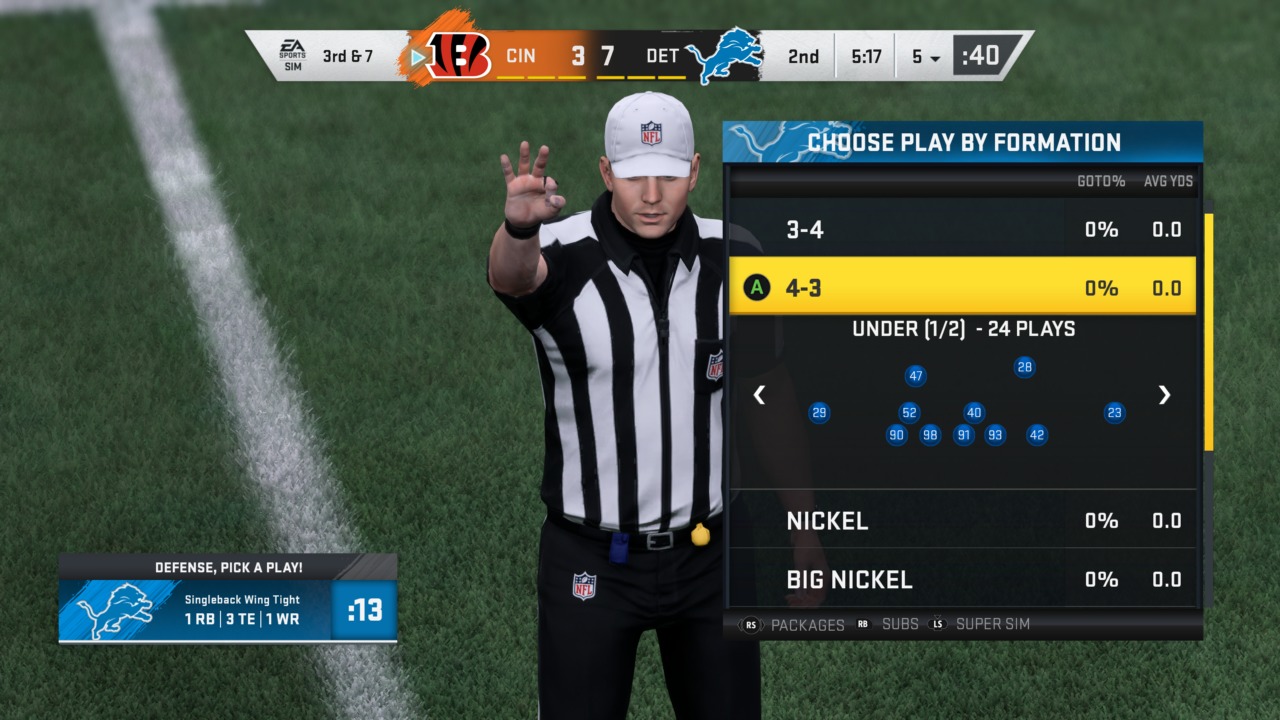 This is the only playbook that repeats its place on the list from last years Madden. If you are an advanced player and you want the ability to mess with your opponent’s mind on every play – then look no further than the Lions playbook.

Last year, this playbook was famous for its contain blitzes and they are re-installed here in Madden 20. Matt Patricia has taken what he learned from the Patriots and whilst they haven’t seen success on the field in real life – it was a big success in Madden 19.﻿﻿

For pass defense, there is the dollar package, nickel 3-3-5 odd and 3-3-5 wide. There isn’t a lot you can’t do with the Lions playbook, but with great power comes great responsibility. You will need to learn how to maximize your substitutions to ensure you don’t end up with players in entirely the wrong positions and leaving mismatches for your opposition to take advantage of. 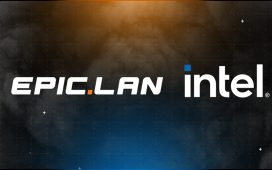 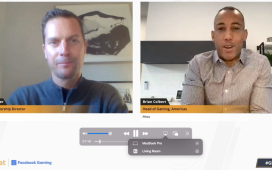 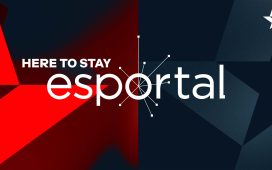 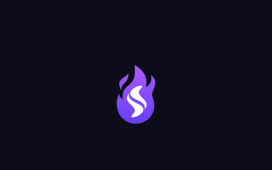 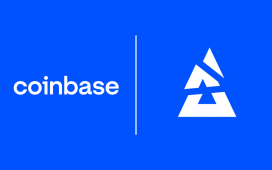 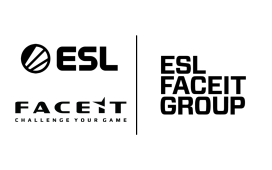 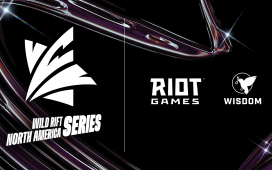