Ludovico Einaudi has told how his soundtrack to Bafta frontrunner Nomadland helped its director piece together and order the film’s narrative.

Chloe Zhao’s story of a woman who embarks on a journey across the American West in a van after losing her job in the Great Recession has secured seven nominations ahead of this weekend’s virtual event, although its soundtrack is ineligible for best original score.

The film, starring Frances McDormand, has been hotly tipped for success at both the Baftas and Oscars after a double-win at the Golden Globes last month.

For the film, Zhao selected tracks from Italian composer Einaudi’s Seven Days Walking album project, which was inspired by walks he took in the Italian Alps, as well as pieces from his Divenire and Elements albums. These accompany music by Icelandic composer Olafur Arnalds and others.

Explaining his contribution, Einaudi, 65, told the PA news agency: “Seven Days Walking for her (Zhao) was a similar concept to Nomadland. The walks in the Alps was a nomadic vision of life. She found that in the music.

“She told me that when she was looking for the music she couldn’t actually find a way to edit the film properly. She had all this footage but she didn’t know how to organise it. She told me my music helped her find the way.”

Einaudi drew parallels between the way he experienced nature while walking in the Alps and how Nomadland’s van-dwelling protagonist did the same on her travels through the US.

He said: “It is very fascinating because it showed me a similar vision but with another landscape. My music was inspired by walking in the Alps in the snow. It was a meditation. I was inspired by the ideas you can have when you are lost in mountains.

“You are walking in the mountains and the torment and the wind and the snow takes you away like you are disappearing inside the landscape. You are walking but you mind is out of the world.”

Einaudi said that despite it being “a different landscape”, that of the American West, “the vision of Nomadland is the same”.

The soundtrack itself is ineligible for both the Baftas and the Oscars because it was not written specifically for the film.

Einaudi dismissed the suggestion he was disappointed and said he would view the film winning in any of the categories as a personal victory.

He said: “Of course the nomination is nice to have but it is more important to be part of the project. I don’t care so much.

“The nomination is a beautiful thing to have but I am not thinking about it every day. I am happy like this.

“I think in general a film is a combination of different languages and if the film wins I will feel part of the victory.”

– Cinema by Einaudi collects together 28 pieces of music from film and TV including two previously unreleased tracks and is releaseased soon. 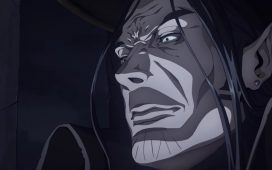