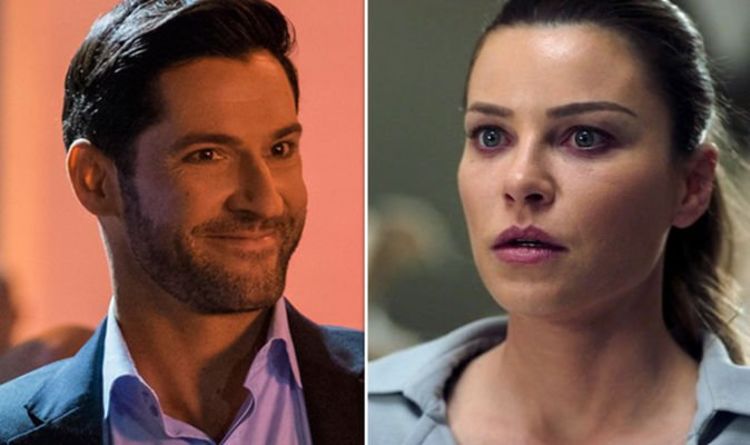 Lucifer will soon begin filming for the fifth and final outing of the show and fans have been wondering just how showrunners will tie up the characters storylines at the end of the show.

Ever since season four of the Netflix hit was dropped fans have been theorising if and how Lucifer (played by Tom Ellis) will reunite with his love Chloe Decker (Lauren German).

However, one fan thinks the reunion will bring an unexpected twist as Lucifer could return to Hell two years later as Hell’s timings are so different to Earth’s.

This user began by pointing out the actress that plays Chloe’s daughter Trixie Espinoza (Scarlett Estevez) is a lot older than the character she plays, and the time difference may offer showrunners’ a solution to this without having to recast.

Taking to Reddit, the fan theorised: “As most of you have probably realized, the actress playing Trixi is a little older than the character, and until now it wasn’t really an issue.

“But it was quite visible in the newest season. I think that it is a factor that could place season five 2-3 years after the ending of S4.

That would fix the age gap and give a cool opportunity to start S5.”

Could the next outing kick off two years later than season four?

The user revealed how they think the next outing would start, theorising Chloe won’t have moved on from the Devil despite the time that’s passed on Earth.

The user added: “Two years after Luci returned to hell, Chloe still is a detective for the LAPD.

“She is on a crime scene, chatting with Ella like any other day, when they start talking about how they both miss their favorite Devil.

“Chloe admits that she still hopes, that maybe one day he will just pop up and everything will go back to normal.

“And boom, speak of the Devil, Lucifer appears out of the blue and acts as if 2 years haven’t passed since they last met. Something like the beginning of S4 but with the roles switched.”

The theory comes after fans were sent into a frenzy after showrunner Ildy Modrovich shared what could be a huge spoiler for season five of the Netflix hit.

Taking to Twitter, Ildy gave fans the initials of the premiere episode of the new outing, asking them to guess what they could stand for.

Naturally the post was met with a flood of comments as fans tried to guess the title of the unreleased episode.

However, the showrunner may have just given the final verdict as she responded to one fan’s tweet with the words “Fantastic guess!”

Replying to a video the show runner tweeted from a Rolling Stones concert, the user said: “Awesome – you have me rethinking my guess on your other tweet – Rolling Stones Devilish Genes- lol – great concert!”

Lucifer season four is available to watch on Netflix.