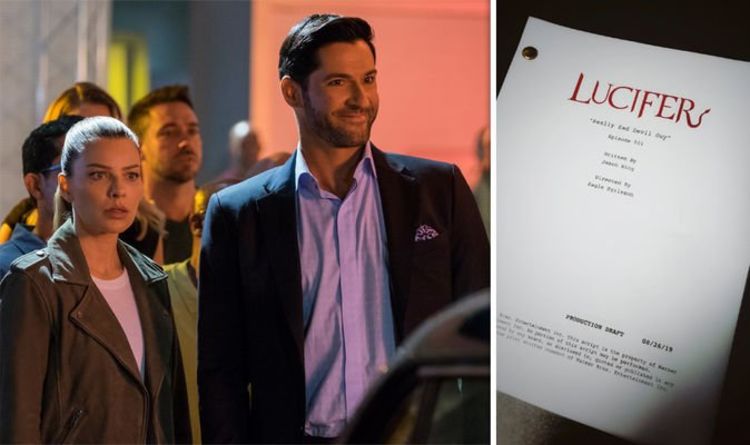 Lucifer fans were sent into a frenzy after showrunner Ildy Modrovich revealed the initials of the first episode earlier this week.

However, the full name has finally been revealed after the first copy of the script was released to the cast yesterday.

Although, the full script has not been released to the public, the name does give fans a clue of what they can expect from their favourite devil in the next outing.

Earlier this eventing the Lucifer Writers room tweeted an image of the script’s front page, revealing that in true Lucifer style, The first episode will be called: “Really Sad Devil Guy.”

The caption read: “What? A sad devil guy? Who could that be@jkning ? #LuciferSeason5 #lucifer”

The name suggests Lucifer is in trouble already, as season four ended with the Devil stuck in Hell while love interest Chloe Decker is separated from him on Earth, with no word of his return.

Speaking out after her earlier tweet that asked fans to guess the title of the premiere episode, Showrunner Ildy Modrovich tweeted a response to the Writer’s Room tweet.

The showrunner said: “Mystery solved!!! Although… my fav of the guesses might be: Rediscovering She Devil Goats. #Lucifer #LuciferSeason5”.

Moreover, Chloe Decker star Lauren German took to social media to share her reaction to the script, revealing most of the main cast has most likely already had a first read.

Lauren tweeted: “Hi #Lucifer folks, so we have our first #LuciferSeason5 script ready for filming written by the talented rapscallion @jkning and oh it’s good. Here we go!!”

Word of the episode 501 script release has been floating about for a while after Maze star Lesley-Ann Brandt showed up to an interview on Radio South Africa with the script in hand earlier this week.

The star didn’t reveal too much, but said she was looking forward to getting back to work for the next outing.

The star revealed production for the show begins in just a couple of weeks, scheduled for the second week of September.

With production about to start fans have been theorising what will take place in the next outing, with one Reddit user speculating there will be a lengthy time jump between season four and five.

The user said this could solve a problem for showrunners, while giving the show an interesting twist.

The user said: “As most of you have probably realised, the actress playing Trixi is a little older than the character, and until now it wasn’t really an issue.

“But it was quite visible in the newest season. I think that it is a factor that could place season five 2-3 years after the ending of S4.

That would fix the age gap and give a cool opportunity to start S5.”

Could the next outing kick off two years later than season four?

Lucifer season four is available to watch on Netflix.