Love Island’s Callum Jones is being coached by Nas Majeed and Luke Trotman on how to ask Shaughna Phillips to be his girlfriend.

That’s right, the pair might make things official and become the first boyfriend and girlfriend of the season – if the scaffolder ever gets his ship shaped.

When discussing his feelings towards the 25-year-old, Callum confessed that he’d never actually been in a relationship before.

‘I don’t know the stages,’ he blushed to his buddies who were searching for answers regarding their romance.

Nas offered up his help and said: ‘I’ll coach you through them.’

However, after the London builder took so long to finally click with a girl, Callum turned down his offer, and teased: ‘I do not need coaching from him, I do not need help from you, I’m fine.’

Meanwhile, Sophie was getting the goss from Shaughna after she pretty much said she loved Callum earlier on in the episode.

‘I came in here to find someone, and I didn’t think I would,’ she admitted.

Sophie pressed: ‘Have you?’ to which the Democratic Services Officer confided: ‘Yeah, I mean I’m not looking for anyone else.’

When asked if she’d found ‘the one’, the star laughed: ‘Not the one! The thought of him saying anything remotely series to me, I just can’t imagine it.’

The cameras then quickly flicked back to Callum and Luke, who was wondering whether or not he’d ‘pop the question’.

‘This is what I mean,’ Callum bleated: ‘Like, do you have to ask the question, or does it just happen?’

Without hesitation, Luke stated: ‘You probably should say you want to be together.’ Nas interrupted: ‘Forever.’

However, viewers weren’t convinced and took to Twitter with theories that Callum’s head would be turned during Casa Amor.

MORE: Harvey Weinstein accuser claims he doesn’t have any testicles as she describes ‘seeing him naked’ 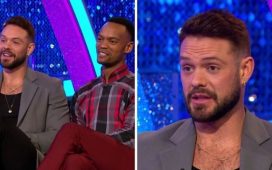