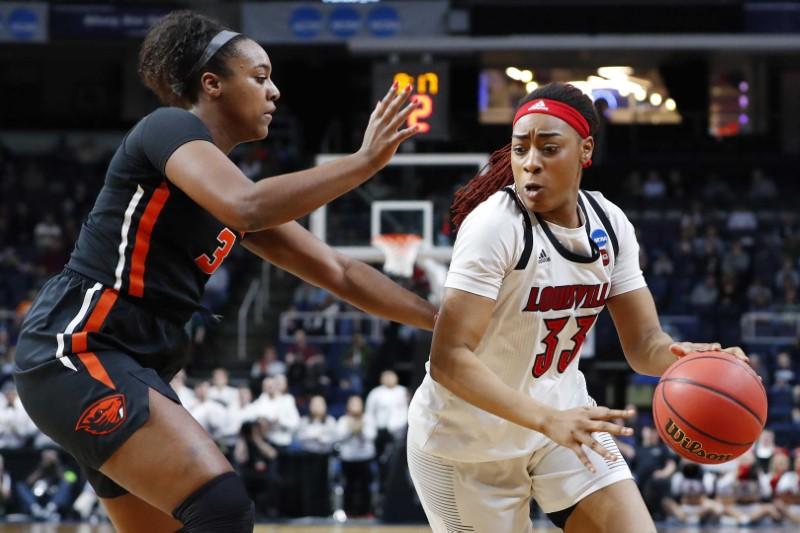 Top-seeded Louisville choked off fourth-seeded Oregon State on Friday night with defense, easing to a 61-44 win in an NCAA Women’s Tournament regional semifinal in Albany, N.Y.

The Cardinals (32-3), who will meet second-seeded Connecticut on Sunday for a ticket to the Final Four on April 5 in Tampa, were led by Sam Fuehring’s 17 points and nine rebounds. Asia Durr also scored 17 points despite making only 5 of 12 shots, and she contributed eight boards and four assists.

But the big story was what Louisville did when the Beavers (26-8) had the ball. The Cardinals limited Oregon State to 17-of-56 shooting (30.4 percent) from the field and allowed only two 3-pointers on 22 attempts. That more than canceled out a 41-33 Beavers advantage in rebounding.

Mikayla Pivec scored 17 points and grabbed nine rebounds for the Beavers, but the rest of her teammates combined to make only 11 of 42 field-goal attempts.

The Albany Region final will be a rematch of a Jan. 31 contest in Louisville, where the Cardinals subdued the Huskies 78-69 to snap a 17-game losing streak against them that dated back to their first meeting in 1993.

Louisville wasted little time putting its stamp on this one. Durr scored six points in a 13-4 run over the game’s first 4:02, a sequence that ended with a 3-pointer and a layup from Fuehring. The Cardinals settled for a 21-15 lead after 10 minutes.

Louisville’s defense ruled the next two quarters, limiting Oregon State to a combined 13 points in that span. The Beavers endured droughts of 2:59 in the second quarter and 4:30 to start the third quarter, keeping them from taking advantage of Louisville’s inability to add to the lead.

Eventually, the Cardinals found the range again, opening up a 44-28 advantage after three periods by rattling off eight straight points in a 1:37 span late in the period. Durr contributed consecutive jumpers, while Bionca Dunham and Dana Evans each added transition layups.