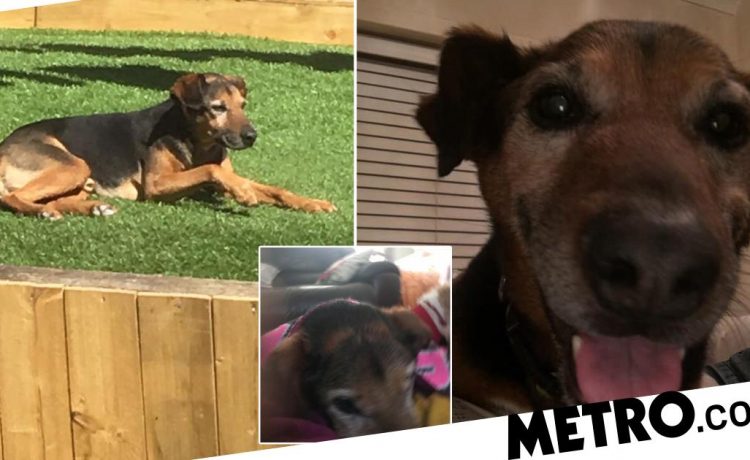 A desperate family finally found their elderly dog today, after he went missing weeks before they were supposed to spend their last Christmas together.

Paul Robinson, his wife and daughters have been appealing for help to find their German Shepard cross Barney since he went missing from his home in Middlesbrough. He had fallen into a stream and was found today under an overhang that had covered him.

The 18-year-old pet, who is partially deaf and blind with arthritis in his back legs, has been seen by a vet and treated for exhaustion and dehydration.

Paul said Barney is ‘currently sleeping and warm in front of the fire’ with no sign of injury ahead of scheduled checkups tomorrow.

He said Barney must have been ‘walked past 100 times without being seen’ before a couple heard whimpering and ‘jumped in the beck to get him’.

The Parkend Pizzeria owner spent the entire weekend driving and walking around trying to find the family’s beloved pet who disappeared wearing a red Christmas jumper.

Before he went missing they had made the difficult decision to put Barney down because of his age and worsening health.

They were eager to get Barney back so they could spend one last Christmas as a whole family.

Paul posted on his pizzeria’s social media page for help to find his ‘best mate’ and attracted hundreds of likes and shares.

The loving dog-owner had said he ‘would not stop searching’ whether Barney was ‘dead or alive’ later said that the helpful response from so many people has ‘restored his faith in humanity’.

READ  Multiple correlations between brain complexity and locomotion pattern in vertebrates
Share on FacebookShare on TwitterShare on PinterestShare on Reddit
newsgrooveNovember 23, 2020