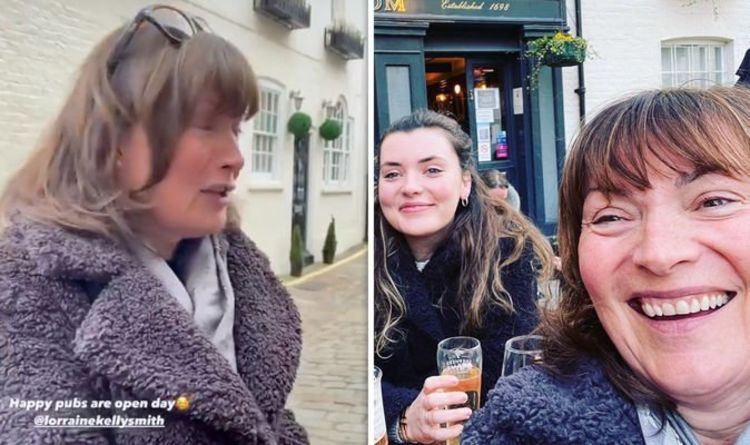 Lorraine Kelly, 61, was seen wincing as she had a shot while out at a pub in London yesterday, with her daughter Rosie Kelly Smith, 26. On her Instagram story, the ITV presenter uploaded a video clip of her knocking back the strong tipple, as lockdown began to lift in the UK.

In the clip Lorraine reshared from her daughter, she could be seen exclaiming “oh my god” after taking the shot.

The morning TV star appeared stylish as she braved the cold sitting outside in a mauve coloured jacket.

Lorraine later uploaded a snap of her sat next to Rosie and a male companion, as the trio enjoyed their drinking session together.

Lorraine said at the time she’d been in touch with Rosie via video calls, but added “there’s nothing like being able to give your child a cuddle”.

”Every mother will know what I’m saying – there’s just nothing like the smell of your child’s hair. Rosie always smells so good.”

The star finally reunited with Rosie recently, and continued to tell MailOnline: “I’m trying not to be too teary, because I don’t want to embarrass her, but being able to hold her after all that time was just fantastic.”

Rosie has chosen to follow in the career footsteps of her mum and studied journalism at Edinburgh Napier University for four years.

The 26-year-old told The Tab: “I don’t really see my mum as an inspiration, I mean she’s not the reason why I’m studying journalism.

“My dad is a cameraman, that’s how my parents met actually, whilst my uncle is in advertising and grandad worked in the television industry too. So I guess it’s in the family.”

Cat Deeley stepped in for Lorraine over the last week while she has been on Easter break, while Ranvir Singh is in charge this week.

Lorraine continues tomorrow on ITV at 9am.