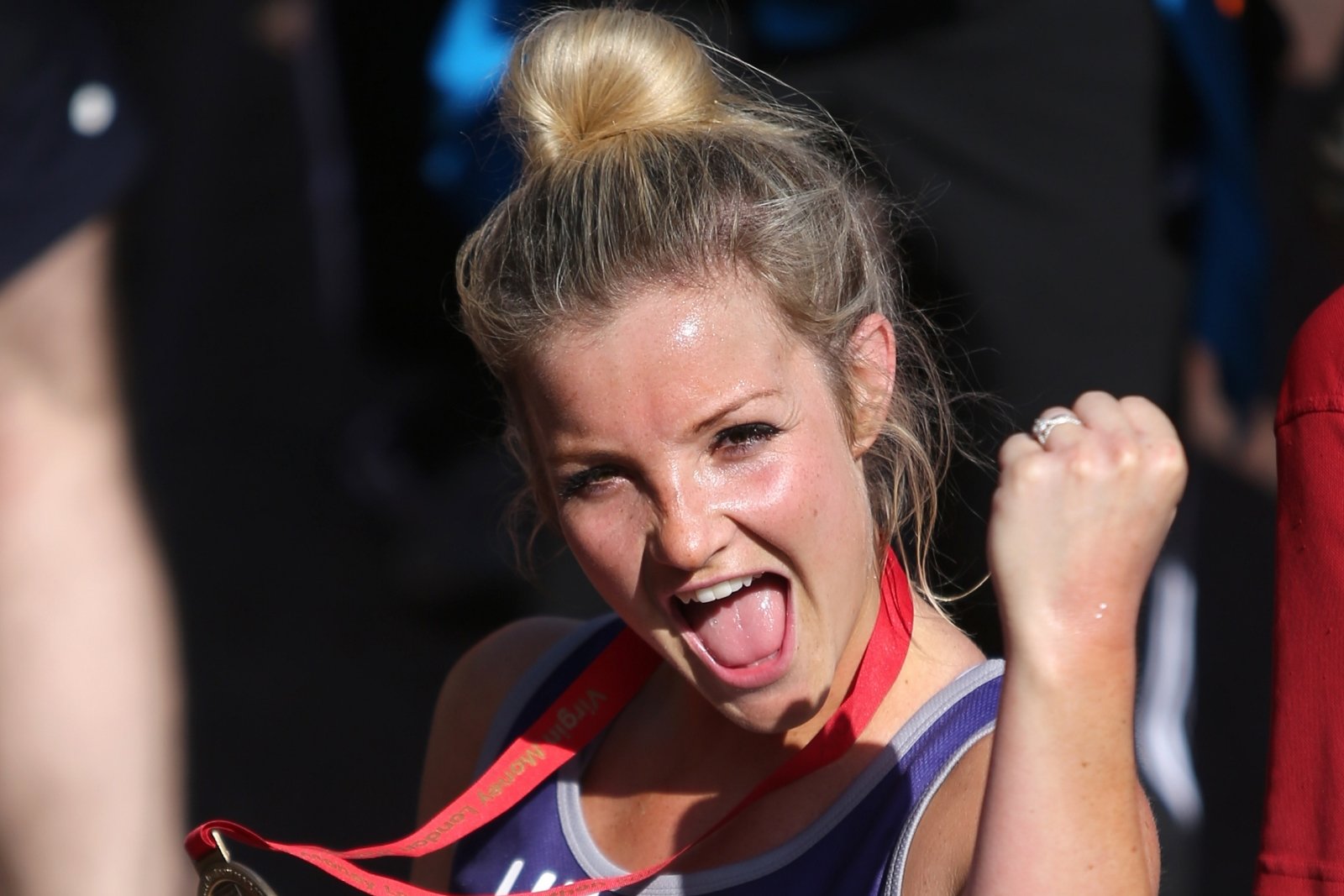 The celebs can forget the red carpet and VIP treatment as they take on today’s London Marathon.

A handful of stars will join the 42,000 strong group of runners to tackle the epic 26.2 mile route from Greenwich to Buckingham Palace.

Eight EastEnders stars will run in support of Dementia Revolution, this year’s official charity, in a special tribute to Dame Barbara Windsor, with big names from the worlds of TV, radio and sport also set to compete.

Here are the famous faces to look out for on the day:

Evans is an old hand when it comes to the 26.2 mile route: this year will mark the Virgin Radio host’s fifth London Marathon.

Charity: The radio host is running in aid of Dementia Revolution as part of a group headed up by Scott Mitchell, whose wife Barbara Windsor has Alzheimer’s.

The former Olympic hockey star, who took home a gold medal at the Rio Olympics in 2016, will be tackling the marathon for the second time, having made her debut last year.

Charity: The sports star is once again raising money for Beat Eating Disorders. Writing in 2018, she said that she chose the charity “because of the number of team mates and close friends within elite sport [she has] seen affected throughout her career.”

​Best known as EastEnders’ Ian Beale, Woodyatt is the soap’s longest serving cast member. He previously ran the London Marathon back in 2017, completing the course in seven hours, four minutes and 40 seconds.

C​harity: Woodyatt​​ is one of a handful of EastEnders stars – including Tanya Franks, Natalie Cassidy, Kellie Shirley, Jake Wood and Emma Barton – who are running the marathon as ‘Barbara’s Revolutionaries,’ supporting the Dementia Revolution campaign launched by Windsor, her husband Mitchell and Alzheimer’s UK.

The former Sky Sports presenter is taking on the marathon for the first time, and is hoping to raise £20,000 for her chosen cause.

Charity: Gallacher is running for SafeHands for Mothers, a charity that uses photography and film to spotlight issues around maternal and newborn health.

A former Great British Bake-Off winner and Dancing on Ice contestant, Brown’s stint as a PE teacher could stand her in good stead. Speaking ahead of the race, however, she has revealed that “running is not [her] preferred sport.”

Charity: An ambassador for Alzheimer’s research, Brown is supporting Dementia Revolution in tribute to her late grandfather and is hoping to raise £2,500.

The sports journalist, who has appeared on Sky Sports News, Channel 4 and Channel 5, is a veteran when it comes to endurance events, having completed a staggering 13 marathons to date. This year will be her second time on the London route.

Charity: Webster is raising money for Malaria No More, having nearly died in 2016 after contracting the disease during a 3,000 mile cycle ride from London to Rio ahead of the Olympic Games.

The 24-year-old actor and radio presenter is best known for his roles in BBC school drama Waterloo Road and on ITV’s Cold Feet reboot. Training for his first marathon has “brought him a whole new appreciation for anyone who has run any sort of distance.”​

Charity: Spellman is running in aid of WWF and UNICEF, two worthy causes that have “been close to [his] heart for many years.”

After making her marathon debut as a Blue Peter presenter back in 2009, Skelton completed the race in 2014 with a time of four hours and 30 minutes. She appeared as part of the BBC’s team of London Marathon presenters in 2015, and is now competing for a third time.

Best known for his regular appearances on Mock the Week and as a co-presenter of The Peacock and Gamble podcast, stand-up comic Gamble is taking part for the second time. “I wasn’t planning on doing it again,” he recently told the Daily Star. “But they called to ask after I’d had two to three glasses of wine.”

Charity: The comedian will once again be running in aid of type one diabetes charity JDRF.

Charity: Pearce is supporting the Lily Foundation, the charity which he helped to establish in memory of his niece Lily, who died of mitochondrial disease at eight months old.

The model and TV presenter is one of the fastest female stars to take part in the race, but has not run a marathon since she set her personal best of two hours 54 minutes and 39 seconds in 2012. Speaking ahead of the event, she revealed that she had “lost her confidence” in running, but is now more focused on enjoying the race than “getting a time.”

Ockenden has appeared in shows like Waterloo Road and Mr Selfridge, and has starred in Coronation Street since 2016. He took part in last year’s race, after being forced to pull out of the 2017 marathon due to injury.

Charity: The soap star is raising funds for Soft Bones, a UK based charity aiming to raise awareness of hypophosphatasia.

The classical singer is a regular fixture at major sporting matches and is running her second London Marathon.

Charity: The musician will be running in support of the David Shepherd Wildlife Foundation, a charity dedicated to the protection of endangered species.

Rugby League star Senior is returning to the London Marathon for a fifth time. The sportsman is considered one of the best players of the Super League era, and has represented Great Britain and England at international level.

Charity: Senior will once again be raising money for the Laura Crane Youth Cancer Trust, which supports 13 to 24-year-olds fighting cancer.

Another former Rugby League star, Peacock has captained Great Britain and England. This is his second London Marathon.

Charity: The rugby ace’s chosen charity is Sue Ryder, to recognise the exceptional care his late father received in the Sue Ryder Wheatfields Hospice in Leeds.

READ  Claudia Winkleman: Strictly host reveals disaster at home with spouse 'No one can breathe'
Share on FacebookShare on TwitterShare on PinterestShare on Reddit
newsgrooveApril 28, 2019