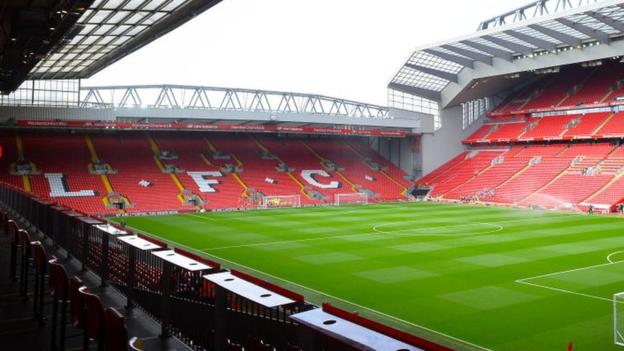 Liverpool Women “deserve to experience” the atmosphere at Anfield which can be “on another level to any stadium in the country,” says manager Vicky Jepson.

The 54,074-capacity stadium will host a Women’s Super League match for the first time on Sunday when Merseyside neighbours Everton visit.

“It’s about supporting all of the club and not just one part of it,” Jepson told BBC Sport.

Liverpool are bottom of the WSL table without a win this season.

Everton have been in impressive form, picking up three wins from five games – only losing to Manchester City and Reading.

But Jepson says there is “no need to panic” and the squad have prepared for the game by watching videos of previous Merseyside derby victories at Anfield and hearing from American Performance Consultant Allistair McCaw.

“Allistair is a good friend so I asked him to come in and chat to the girls,” said Jepson. “He said there was no confidence dip in the group and we just need to keep working to put things right.

“We showed them the video of Jurgen Klopp running onto the pitch and hugging Alisson when Divock Origi scored that last-minute winner [for the men’s team against Everton in December].

“That paints a perfect picture of what it means for the club. We have some things lined up on Sunday before we turn up too which will be good.”

Everton boss Willie Kirk thinks Liverpool are actually “in a false position” in the table and his players “have to ignore” form on paper.

“They have five or six players that can take up any of the four front positions and they are all talented and can give you headaches,” Kirk told BBC Sport. “It was only a year ago that we had no wins going into the Merseyside derby and we won it. We are on the other end of that now.”

Everton will be without top scorer Chloe Kelly – who has four goals in five WSL games – after she picked up a late red card in the Continental Cup defeat by Manchester United.

“Chloe has huge potential and will be a big miss for us but it gives somebody else a big opportunity. They will be over the moon to have their chance to shine,” Kirk added.

Following this month’s international break, Kirk says the Everton team have had just two days of preparation ahead of the derby but “it’s actually a good thing”.

“Everybody is so hyped up for the occasion so we don’t want them to tire themselves out,” Kirk said. “We haven’t done anything really different but we have acknowledged as a group that this is a big game. We will try and use that excitement to give us energy on the day.

“We know it’s not just another game. It’s a big occasion and the eyes of the football world are going to be watching us, hopefully.”