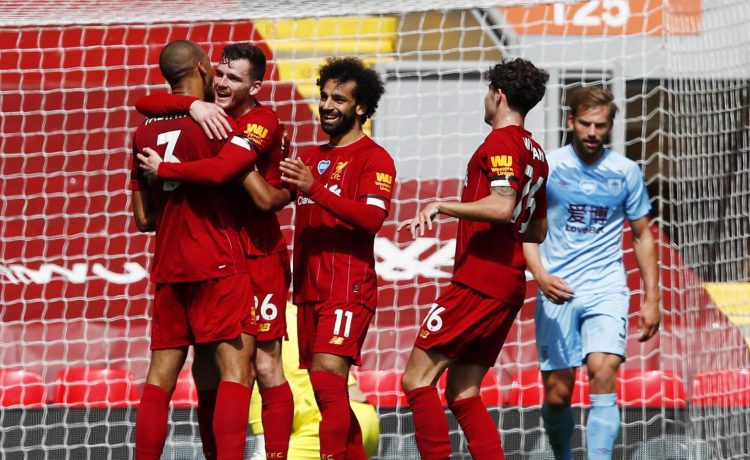 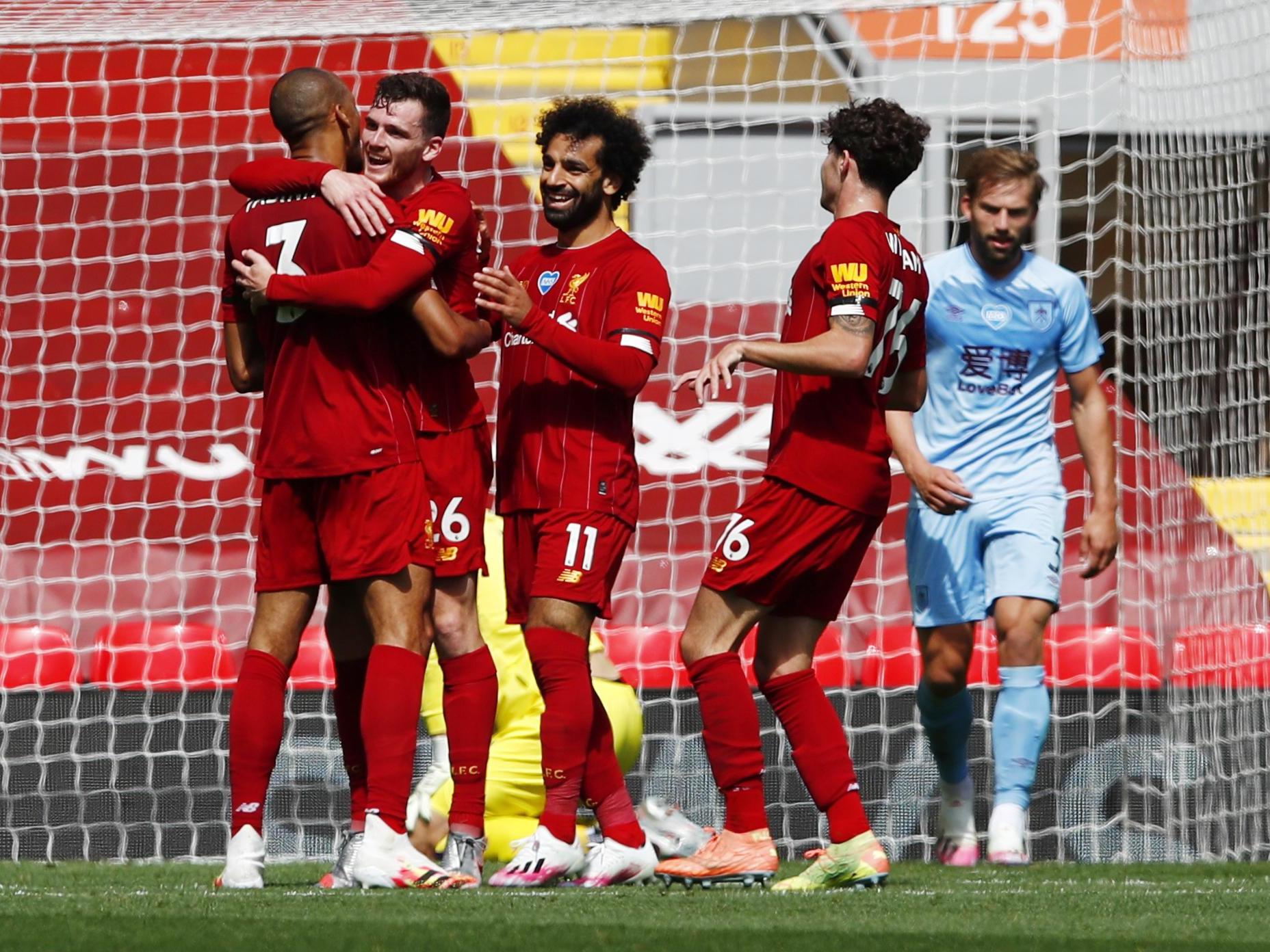 Liverpool are taking on Burnley at Anfield today as the close in on the Premier League points record set by Pep Guardiola’s Manchester City.

The new champions began the day on 92 points, and with four games remaining they can set a new benchmark for top-flight points. However they will have to do it without their captain Jordan Henderson after he was ruled out for the rest of the campaign, and face a Burnley side in good form since the restart.


62 min: Chance! Another Robertson corner is headed away but drops to Williams, whose volley is blocked and falls to Wijnaldum. His shot is blocked too, but comes out to Salah, who looks likely to guide the ball towards an almost empty net, with Pope having committed to a dive. Salah’s first-time shot is completely mis-hit, though, and flies off target.


61 min: Fabinho shoots from distance and his shot is deflected off Brownhill. It wrong foots Pope but rolls just wide of the post. Bardsley then gets his head to the Liverpool corner.


59 min: Rodriguez and Wood look slightly forlorn up front. They’ve been asked to chase a lot of long balls, mostly in vein. Van Dijk and Gomez are rarely ever outrun, so it’s a tough job for Burnley’s front two.


58 min: Firmino finds Mane, who works some room to shoot on his left foot and slashes it well wide.


56 min: Alisson is forced into action as Rodriguez meets a Westwood cross with a diving header. He’s offside anyway, but the goalkeeper had to be alert.


54 min: A rare opportunity for Rodriguez, who’s picked out by McNeil and has a go from the edge of the box. He tries to curl his shot into the far corner but succeeds only in picking out Alisson.


52 min: Close! Salah races forward and finds Jones to his left. The youngster has time and space to shoot on his left and flashes an effort narrowly wide of the near post. The fake crowd cheers, but prematurely.


51 min: More intricate buildup play from Liverpool as Jones and Firmino look to link up on the edge of the box. It seems a matter of when, rather than if, the second goal is going to come.


49 min: Firmino can’t believe it! Salah plays him in with a perfect through ball and the Brazilian hits it first time on his left foot. He doesn’t quite catch it right, but it looks like the ball might sneak in at the far post. Instead, it comes off the woodwork and Burnley clear.


48 min: Tarkowski has to be alert to get his head to a long ball from Van Dijk, with Salah lurking behind him. It goes behind for a corner, which Williams curls out of play.


47 min: Burnley win an early free kick, which Westwood sends into the box. It’s a poor ball, though, and cleared by the first man.


Burnley get the second half underway.


Just Firmino that can’t seem to buy a goal at Anfield, it seems.


The first half comes to a close. It’s been another dominant home display from Liverpool, who are on course for an 18th win in 18 games at Anfield this season. Burnley are still in the game, mostly because of Nick Pope, who’s made several excellent saves.


45+2 min: Another brilliant save from Pope! Mane receives the ball in the box, turns onto his left foot and drives a shot at goal. Pope again stretches out a long arm to deny Liverpool, who’d probably be out of sight if it wasn’t for the goalkeeper.


45+1 min: Mane digs a pass out to Firmino on the right, and the Brazilian’s shot is blocked. It goes behind for a corner, which Pieters heads clear. There’ll be two added minutes.


44 min: Bardsley launches the ball forward to Rodriguez, who escapes in behind the Liverpool defence. The flag stays down, but the forward’s shot is dragged wide from a tight angle. Liverpool have just switched off a couple of times at the back towards the end of the half.


43 min: Close! Mane sets Robertson away and he breezes past Pieters before putting a low ball across the face of goal. There’s no one in the middle to meet it and it rolls just beyond the far post for a goal kick.


42 min: Westwood sends another delivery into the six-yard box and Alisson does well to push it away. From open play, Burnley have done very little, but their set pieces are threatening.


41 min: Another poor pass at the back, this time from Robertson. He picks out McNeil, who works space to shoot but sees his effort blocked by Gomez. Burnley will have another corner.

Liverpool vs Burnley kicks off at 3pm on Saturday 11 July.

How can I watch on TV?

The match will be broadcast live in the UK on BT Sport 1, BT Sport Extra 1 and BT Sport Ultimate, available to all BT Sport customers.

Can I stream the game online?

Burnley are in good form right now, and Liverpool are without their captain, but even Sean Dyche will struggle to come up with a way to stop Liverpool in full flow. Liverpool 2-0 Burnley.