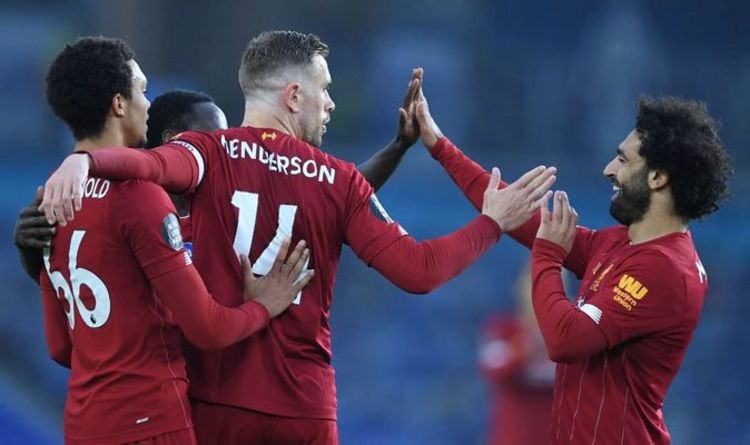 Trent Alexander-Arnold claims Liverpool want to try and get Mohamed Salah as many goals as possible between now and the end of the season. The Egyptian remains in the hunt for his third successive golden boot after scoring a brace in the 3-1 win at Brighton.

He struck the opener inside five minutes when he raced onto Naby Keita’s pass and smashed home past the helpless Mat Ryan.

It was 2-0 moments later when Salah teed up Jordan Henderson to curl home into the top left corner from the edge of the area.

Brighton did get themselves back into the game when Leandro Trossard finished well from Tariq Lamptey’s cross.

Liverpool remained in control despite Dan Burn going close to an equaliser, before Salah headed in his second to secure all three points for the Reds.

Alexander-Arnold was not the youngest Liverpool player on the field tonight with 19-year-old Neco Williams handed his first Premier League start.

The 19-year-old’s inexperience showed as Brighton attacked in numbers down the right-flank, leaving Williams slightly exposed.

He was booked and brought off by Jurgen Klopp at half-time as protection.

The Liverpool boss was clear that was the only reason he was subbed, similarly to Joe Gomez at Manchester City in last week’s 4-0 defeat.

“I know in football, everybody thinks it’s not good if you take a player off after 45 minutes,” Klopp said.

“He had a yellow card and we didn’t protect him well enough on the left. It was his first professional start so I cannot tell him not to tackle.

Meanwhile Alexander-Arnold, who has suffered several sobering moments in his remarkable rise to prominence, insists the performance is part of the learning curve for his team-mate.

“It’s his Premier League debut and something he’ll never forget. It maybe hasn’t gone they way he would want it to but he’s a young lad and he needs to make mistakes to learn from them,” the right-back said.

“He’ll learn, he’ll progress. He’s showing signs of being a really good player and has the potential to be world-class.”