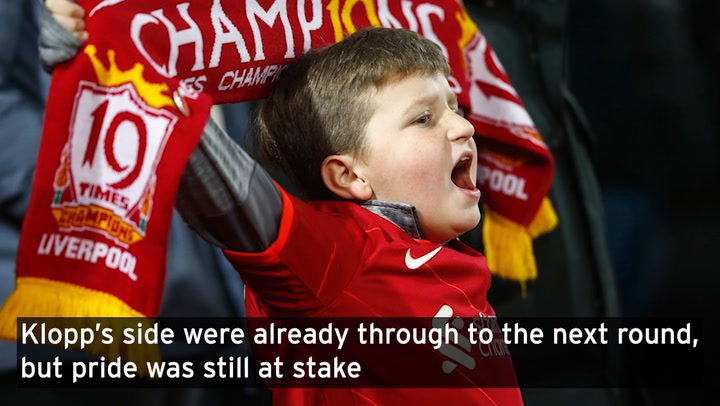 Thiago Alcantara lit up Liverpool’s dead rubber clash with Porto as the Spanish midfielder helped the Reds keep up their 100 per cent record in the Champions League.

The former Barcelona and Bayern Munich man’s brilliant 30-yard screamer flew low into the bottom corner of the net to open the scoring at the start of the second half.

Mohamed Salah fired home a second to double Liverpool’s advantage, ensuring that the Portuguese visitors were made to regret passing up several inviting first half opportunities.

Mehdi Taremi and Otavio missed the best of those openings, while a much-changed Liverpool had Sadio Mane’s first half strike ruled out for offside.

Thiago broke the deadlock with an incredible strike
(

It was interesting that Liverpool put Thiago up to face the media before this game, and perhaps a sign that his influence around the club is growing.

It hasn’t been easy for the Spaniard since he’s joined the Reds, doing so in a pandemic and then being thrust into an injury-hit team that was nothing like advertised.

His form towards the end of last season, overlooked by some, was exemplary though, and after helping Liverpool into the Champions League he lit up a stage where he belongs with a stunning strike here.

Stunning probably isn’t a fitting enough word for it though.

The trajectory of the ball after he thumped it was simply gorgeous, and it was the type of shot that we all dream of hitting in five-a-side.

This is how the truly gifted do it though, and it was remarkable to witness.

Youngster Morton came in for his first Anfield start
(

Being a teenage Liverpool fan making your first Anfield start in front of a packed house in the Champions League must be quite a daunting proposition.

But then Jurgen Klopp calls you “a baller” in his pre-match interview.

Tyler Morton probably strutted onto the pitch after such praise, and the young midfielder didn’t look out of place in a central midfield position where he snapped into challenges and progressed the ball well.

The locally-born youngster is becoming the surprise of Liverpool’s season, and we could yet see more of him.

3. Leading from the back… and the bench

It was before the trip to Porto in September that Jurgen Klopp was asked about his new, extended ‘leadership group’, with the Reds boss deciding he needed to add more players to it due to four not being enough in the 2020-21 season.

Jordan Henderson, James Milner and, obviously, Virgil van Dijk were all not guaranteed starters in the last campaign, meaning that the armband often fell to Gini Wijnaldum, the fourth member and fourth in rank, despite his imminent departure from the club.

Before the trip to Porto Klopp confirmed that Trent Alexander-Arnold, Andy Robertson and Alisson had been added to the mix for this season, in that order, but with five of his leaders on the bench here, it fell to sixth-choice Alisson to wear the armband.

Klopp will hope it is something he doesn’t have to get used to.

Diaz was Porto’s most dangerous player and caused Liverpool problems
(

Takumi Minamino is living proof that a good Champions League performance against Liverpool at Anfield will catch the eye of the hosts, even though they had obviously been watching the Japanese for long before he impressed against them for Salzburg in 2019.

Reds scouts will be well aware of Luis Diaz’s qualities too, because every big club across Europe is, and the Porto man showed why he is so highly rated with a display of determined and direct running.

Stationed off the left, he made life mightily difficult for Neco Williams, particularly in the first half, and if some of his teammates’ finishing was better than he’s likely to have bagged an assist.

The Colombian is a player who looks primed for a big move, and Liverpool should be at the head of the queue.

5. Mohamed Salah gets his goal

Salah fired home his 17th of the season to seal it
(

Because of course he does.

Salah wants to play in every Premier League and Champions League game, and because Salah does then Mane does too.

The Senegalese might have seen his first half strike chalked off for a marginal offside, but Salah was the right side of the line when he collected a pass from Henderson and fired home a 17th goal in his 17th game of the season.

How are you fixed for Milan in two weeks Mo?