In a lengthy Instagram post, Liv Tyler has revealed that she had Covid-19 and had to isolate from her family for 10 days.

The Lord of the Rings and Armageddon actress was struck down with the virus on New Year’s Eve and was forced to isolate from her family for 10 days.

Sharing a gorgeous photo of her finally being able to reunite with her children after isolation, Liv said: ‘Suddenly on The morn of the last day of 2020… boom it took me down. It comes on fast, like a locomotive. Owchie.

Tyler revealed that thankfully no one else in her family or bubble tested positive for the virus.

She continued: ‘It floored me for 10 days in my bed. There is the physical aspects but also emotional and psychological ones too. It F’s with your body and mind equally. Everyday different. Being isolated in a room alone for 10 days is trippy to say the least.’

Tyler said ultimately it was the thought of reuniting with her children that motivated her most, explaining: ‘I missed My babies beyond but they visited my window and called up to me and I watch them play outside. Such a gift.

‘They sent little messages and drawings under my door. Reminders of what’s on the other side. What to get better for.’

Tyler ended by paying gratitude to everyone affected and those fighting coronavirus on the front lines: ‘I am so grateful to be through it and spent my days alone praying and beaming love to all who are effected and suffering from this. Those who are working tirelessly to protect and care for others. Thank you. We are all connected through this experience.’

Tyler then paid respects to those who hadn’t made it through and those that are still suffering. 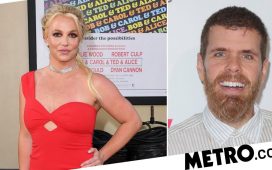