Little girl, 6, nearly died after being bitten by her beloved pet cat 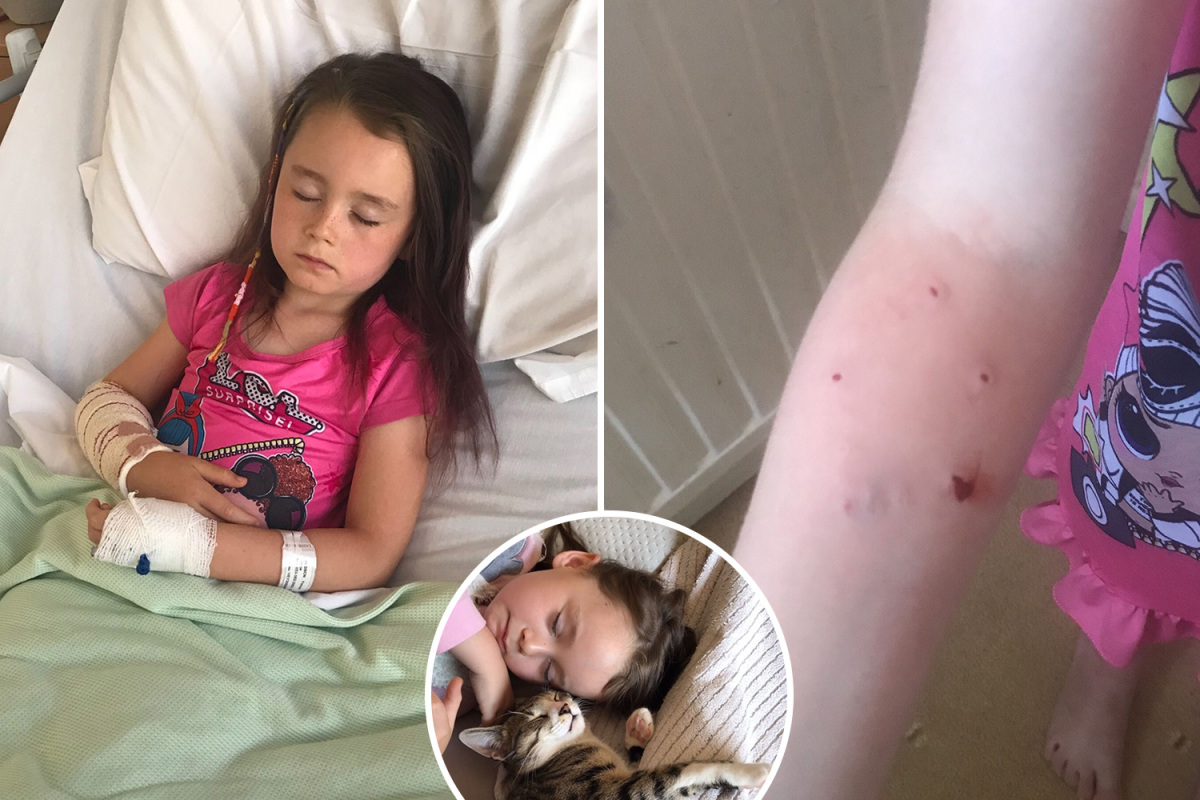 A LITTLE girl almost died after contracting a killer infection – when she was bitten by her beloved pet CAT.

Six-year-old Alice Hudson was throwing Tigger, who she affectionately calls her “brother”, a catnip ball when the half-Bengal sank his teeth into her arm.

The schoolgirl screamed out in pain and mum Chantelle Hudson, from Driffield, East Yorkshire, treated the wound with antiseptic.

But when she was still complaining about the five puncture marks the next day, the 30-year-old decided to take her to hospital.

She was shocked to discover her daughter had contracted Pasteurella, a bacteria commonly found in cats’ mouths.

It can cause serious soft tissue infection – and develop into sepsis or meningitis.

Doctors said they would need to carry out an operation to remove the infected tissue, leaving Alice in hospital for three days.

A-listers praise the cannabis drug but can CBD really transform your health?

But the mum-of-one is now urging people to always get animal bites checked out by doctors, no matter how insignificant they first appear.

Chantelle, said: “We’ve had Tigger since he was a kitten.

“Tigger and Alice are little best friends, Alice is obsessed with him and they won’t leave each other alone – they’re always playing together.

“Tigger loves her and he regularly sleeps on her bed with her, she says he’s her brother.

“The night it happened they were playing with Tigger’s catnip ball that he loves.

“Alice went to throw his ball and as he ran to get it she did too.

“As she got hold of it first he went for it and bit her arm instead of the ball. He wasn’t being vicious, just playing.

“I knew she’d hurt herself because of the scream she let out, Tigger knew he’d hurt her too so he ran away.”

Chantelle immediately ran Alice’s bleeding forearm under the cold water tap and applied antiseptic to the five puncture wounds before heading to work a night shift on August 5.

READ  Type 2 diabetes: How to keep your portion sizes in check to avoid risks

Chantelle took Alice to a walk-in centre in Bridlington the following day where staff assessed the bite, which didn’t appear inflamed.

I remember thinking ‘all this because of a cat bite’

After an appointment at Hull Royal Infirmary’s trauma unit on August 7, Chantelle was told four of the five puncture marks were infected and needed cleaning out under general anaesthetic.

Tests revealed that Tigger had given Alice Pasteurella and she needed debridement – a procedure to remove the infected tissue.

Chantelle said: “Alice was screaming in agony and wouldn’t let anyone touch her arm so they knew it was infected – that and some of the puncture wounds were oozing puss.

“When they told me they had to operate I felt sick.

“It only hit me when I walked out of theatre without her, that’s when I started shaking and crying.

“I remember thinking ‘all this because of a cat bite’.

“When she was in theatre I was thinking about what to do about Tigger but I realised that what happened was a genuine accident.

“He’s not vicious, it would have been totally different if he’d attacked her.”

After the hour-long operation Chantelle and Michael visited her on the ward as she recovered.

Chantelle said: “When we walked in she was just lying there on a big bed on her own, this little body in a big bed.

“She didn’t really speak for the first ten minutes afterwards when we got in there, she just looked really tired and her face was bright red.”

Alice was on IV antibiotics for the first 48 hours after her operation and then was prescribed a two-week course of oral antibiotics to take home after being discharged on the evening of August 10.

The schoolgirl was initially hesitant to be near a repentant Tigger but after a few days at home under the watchful eye of her parents they’re back to being inseparable.

Chantelle said: “The first few days she didn’t want to go near him as she knew it was because of him she had to go to hospital.

“When Alice came home from hospital Tigger kept going up to her with his head down like he knew she hadn’t been at home because of him.

What is Pasteurella and how can it affect children?

Bacterial organisms from the Pasteurella species live in the mouths of most cats, as well as a significant number of dogs and other animals.

If your child is bitten or scratched by an animal that carries Pasteurella organisms, these bacteria can enter the body through the break in the skin.

They most often cause a potentially serious infection of the skin called cellulitis.

On occasion, these bacteria can be spread to humans from an animal’s saliva or nose mucus.

Symptoms of cellulitis usually begin after a very short incubation period, typically within 24 hours after your child has been bitten or scratched.

They may develop swelling, redness, warmth, and tenderness of the skin, sometimes with discharge of pus.

In some children, lymph nodes in the area of the infected skin may become enlarged and chills and fever can occur.

Complications may be present in some children, including an infection of the joints (arthritis), bones (osteomyelitis), and tendons (tenosynovitis).

If your child is bitten or scratched by an animal, wash the wound thoroughly with soap and water.

Contact your doctor if the area becomes red, warm and tender.

“He wouldn’t leave her alone and kept going up to her and lying next to her.

“I think it was a shock to him because she wasn’t playing with him and she didn’t want to sit next to him.

“We did say to her he could be rehomed with her grandma but then she would kick off and say ‘no’.

“Alice and Tigger are back to being best friends and looking at them now you wouldn’t think anything of it.

“Her arm has healed really well and she’s now been discharged from the hospital.

“This [situation] had really hit home and I would say to anyone in a similar position to just get it checked out even it’s not a deep wound.”

Alice said: “Tigger is one of my best friends, it’s nice being home with him again.

“My arm was sore in hospital, but it’s all better now.”