London‘s streets fell silent during 2020 as the coronavirus lockdown saw barely a soul in the centre of the usually bustling metropolis.

And now the eerie lack of road noise can be compared with the bustling sounds of the same streets captured almost a century ago, as the Museum of London digitally recreates gramophone recordings taken by the Daily Mail in 1928.

The initial recordings were taken at five London locations as part of a campaign by the newspaper to draw attention to the growing rabble on the city’s streets.

One of the five records was aired by the BBC, but the rest have never been aired or available to listen to in their entirety until now.

Archived clippings from 92 years ago reveal growing concern over traffic noise referred to as a ‘vague roar’ and ‘pandemonium’.

Culprits of the era included motor-omnibuses, horse-drawn drays, tramway-cars, lorries and the whistle of a policeman controlling traffic.

The Museum of London has also been using the lockdown to build a unique portfolio that documents the year the world was struck by a pandemic. 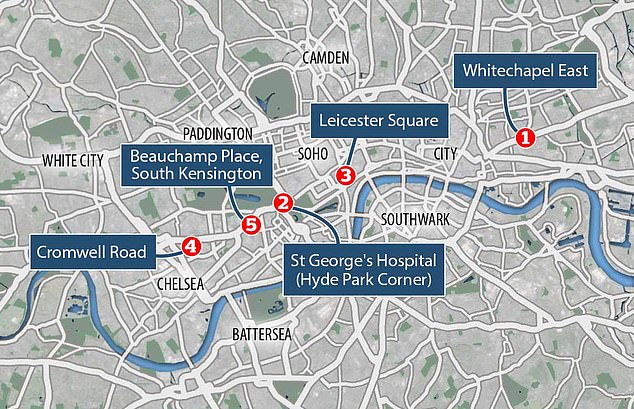 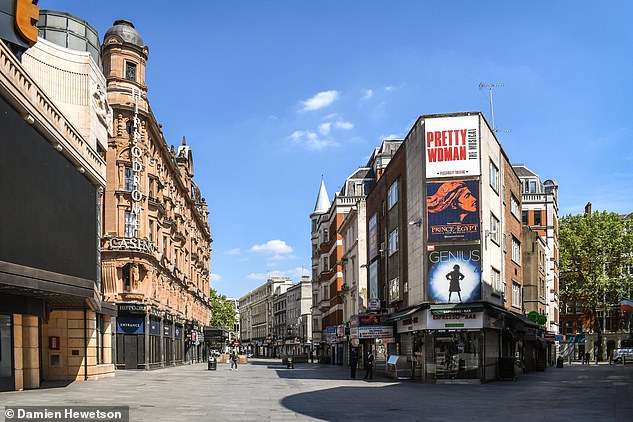 Pictured, Leicester Square during 2020’s coronavirus lockdown, with the Hippodrome on the left. The Museum of London recorded road noise to immortalise the silent roads 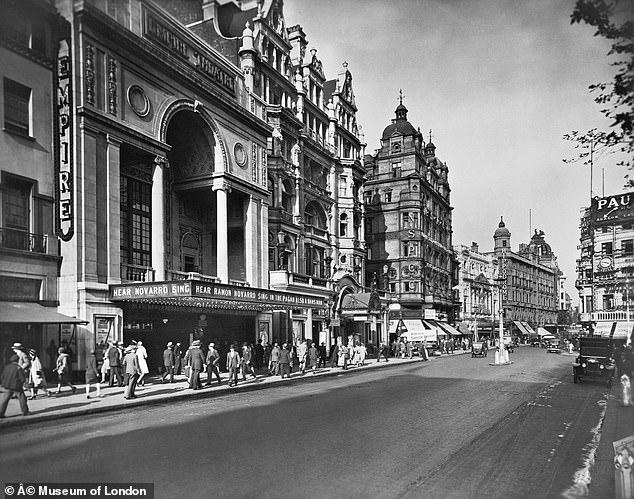 Pictured, the north side of Leicester Square, looking West in 1928. It shows the Empire Theatre on the left of the picture, once a famous music hall, which was converted into a cinema shortly before this photograph was taken. In the centre, can be seen Daly’s Theatre, which was demolished in 1937, and beyond it is the London Hippodrome

In 1928, the recording system was at the cutting edge of technology and extremely laborious to use.

The Columbia Graphophone Company was employed by the Daily Mail to immortalise the headline-worthy road noise at five central locations.

The system was set up in a vacant room, and an entire production team was required to capture the noise via a ‘microphone suspended out of the first storey window’.

By comparison, the modern audio clips for the museum’s ‘Collecting COVID’ initiative were taken by Will Cohen of String and Tins, a recording studio, using two small microphones.

They visited the same locations as the Columbia Graphophone Company did in 1928, to provide a like-for-like comparison.

Reporting in the Daily Mail on 11 September 1928, Commander Daniel RN DSO wrote: ‘That was a large lorry with building materials, very noisy. There’s a motor bicycle without a proper silencer!

‘That was the self-starter of a small seven-horsepower car . . . that was an awful vehicle on solid tyres,’ he notes on 20 September.

Even back then, journalists were questioning how damaging noise pollution could be on health.

In a later article on September 6, 1928, Commander Daniel wrote: ‘When the ear has become accustomed to the incessant but indeterminate roar, the question arises, “Is this really so intolerable after all?”

‘This question is really the kernel of the nut to be cracked.

‘We have become so used to the perpetual noise around us that many of us fail to appreciate what our poor brains are being called upon to endure.

‘At the end of the record has been left a small space in which the normal instrumental noises of the gramophone needle may be heard, and the silence of this is like the darkness of Egypt, which could be felt.’ 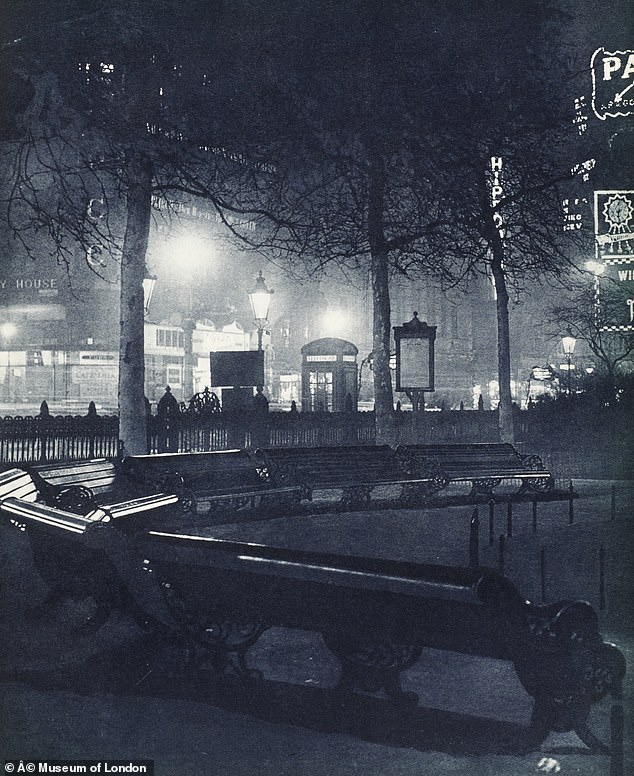 Pictured, Leicester Square at night in the 1920s. The Daily Mail launched an anti-noise campaign to cut down on traffic sounds in 1928 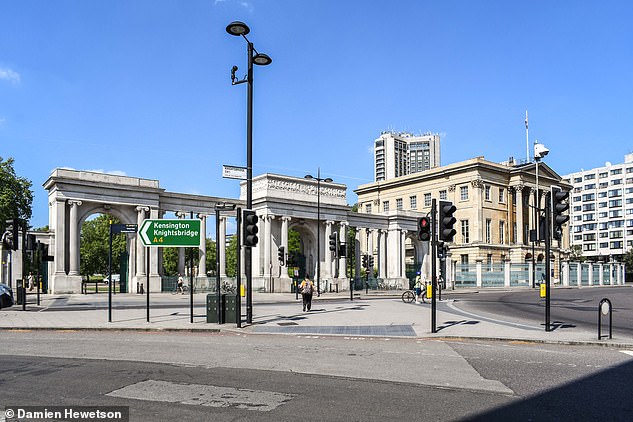 Pictured, a story that appeared in the Daily Mail newspaper on September 6 1928 when Commander Daniel RN DSO discusses  the impact of road noise

Although no scientific or professional analysis has compared the sound levels of the different periods, it is clear London in 1928 was extremely busy, wiping away any remaining ideologies of an idyllic post-Edwardian era.

Foteini Aravani, Digital Curator at the Museum of London, told MailOnline: ‘In January 1928 there was the great flood of London and there was a lot of rebuilding that boosted noise levels in the city centre.

‘London had started expanding during the interwar years of the 1920s and 1930s and the city saw the geographical extent of its urban area grew faster than at any point before or since.

‘London’s population reached its all-time peak of about 8.6 million in the Thirties. And then there was World War II and the Blitz and the reconstruction of the city after the air raids.’

Despite all these unpredictable and often horrific events, London was never silenced, something Ms Aravani does not envisage happening any time soon.

‘In the future, introductions of electric cars or car-free regions would most probably change the soundscape of London, but in all these predictions or projections about the development of the city, we may need to leave more room for the unexpected and the unpredictable,’ she adds.

‘It is very rare to listen to the development of a city, especially over the course of nearly a century.

‘These soundscapes offer a very immersive and multi-sensory way to experience London in 1928 and during the lockdown.

‘They soundscapes provide a sensory experience, they trigger the imagination and invite the listener to go back in time.’

Social distancing, fewer cars on roads and drops in tourism and travel resulted in the ‘longest and most pronounced quiet period’ of seismic noise in recorded history.

Seismic noise refers to vibrations in the ground, caused by traffic or heavy machinery and natural phenomena such as earthquakes and adverse weather.

Global human-caused (anthropogenic) seismic noise dropped by 50 per cent during March to May as counties entered lockdown to halt the spread of SARS-CoV-2.

The largest drops in seismic noise were recorded in the most densely populated areas around the world, like Singapore and New York City.

But drops in seismic noise were also recorded in remote areas like Germany’s Black Forest and Rundu in the African country of Namibia.

What Australia needs to do to avoid a third Covid wave