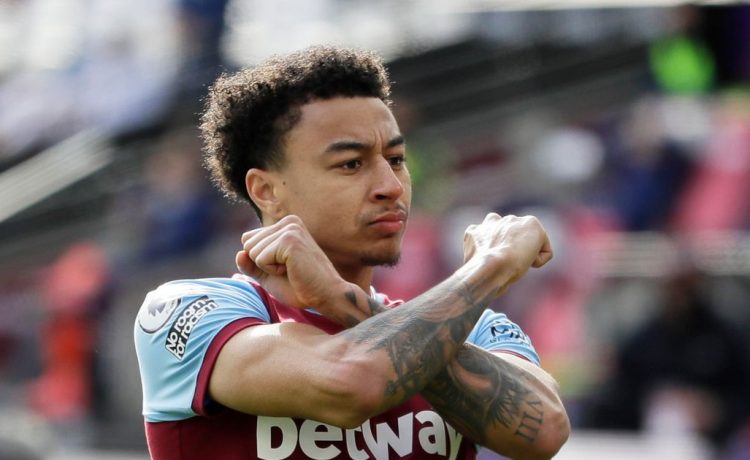 Jesse Lingard had a telling message for Bruno Fernandes after waiting for him in the Old Trafford tunnel.

It comes as West Ham saw their efforts to land a spot in the Champions League next year hampered.

They were dealt a cruel 1-0 loss to Manchester United after an own goal from Craig Dawson that saw the Red Devils jump up to second.

The Hammers remained in fifth but failed to close the gap on Chelsea – though they still have a game in hand over them.

One of the reasons for West Ham’s success in recent weeks has been the form of Lingard – who joined on loan in January.

As per regulations, the midfielder was unable to play against his parent club United.

But that did not stop him from attending to watch both of his teams in action.

Ole Gunnar Solskjaer admitted that Lingard had to leave because he would not get in over Fernandes at Old Trafford.

And the 28-year-old met the Portugal international in the tunnel where the two embraced in a showing of good faith from the West Ham loanee.

The playmaker has been in fine form under David Moyes, scoring four in six appearances for his new club.

What it means for Lingard’s future remains to be seen but with Fernandes set to remain a key player at United for some time, a permanent move could beckon.

Meanwhile, United are set to offer a new contract to Eric Bailly as he regains confidence following a number of injury-ravaged seasons.

“We’ve started talking to Eric and his representatives,” said Solskjaer.

“He is keeping fitter for longer and you can see in his performances as well. I’ve been very happy with him.

“His playing style; sometimes I’ve made him lose too many games. One hundred games, that’s not enough for the period he has been here.

“He is getting more and more robust. He’s one we’re talking to.”