A revolutionary lightweight exosuit that makes walking and running easier has been developed.

They say it could help keep them fresh by lightening the load of their jobs and assist them in negotiating difficult terrain.

The portable gear may also improve mobility and quality of life for the elderly and people suffering from neurodegenerative disorders. 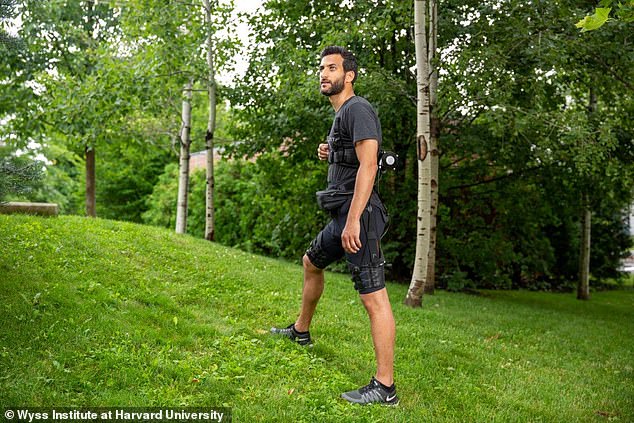 A revolutionary lightweight exosuit (pictured) that makes walking and running easier has been developed. Scientists say their pioneering design – weighing just five kilos (11 lbs) – could be worn by soldiers, firefighters or rescue workers

WHAT IS AN EXOSKELETON?

Exoskeletons are wearable devices that work in tandem with the user. The opposite of an exoskeleton device would be an autonomous robot that works instead of the operator.

Exoskeletons are placed on the user’s body and act as amplifiers that augment, reinforce or restore human performance.

The opposite would be a mechanical prosthetic, such as a robotic arm or leg that replaces the original body part.

Exoskeletons can be made out of rigid materials such as metal or carbon fibre, or they can be made entirely out of soft and elastic parts.

Exoskeletons can be powered and equipped with sensors and actuators, or they can be entirely passive.

Exoskeletons can be mobile or fixed/suspended and can cover the entire body, just the upper or lower extremities, or even a specific body segment such as the ankle or the hip.

The suit, created by researchers at of the Wyss Institute for Biologically Inspired Engineering at Harvard University, is made of textile components worn at the waist and thighs – and a mobile actuation system attached to the lower back.

It is controlled by an algorithm that can robustly detect the transition from walking to running and vice versa.

It’s the first machine of it’s kind that can assist both walking or running – a fundamentally difficult challenge because of the biomechanics of the two gaits.

But both have in common an extension of the hip joint. This starts around the time when the foot comes in contact with the ground and requires considerable energy for propelling the body forward.

In treadmill-based indoor tests it reduced users metabolic rates of walking and running by an average of 9.3 per cent and four per cent respectively.

Study author Professor Donald Ingber said: ‘This breakthrough study gives us a glimpse into a future where wearable robotic devices can improve the lives of the healthy, as well as serve those with injuries or in need of rehabilitation.’ 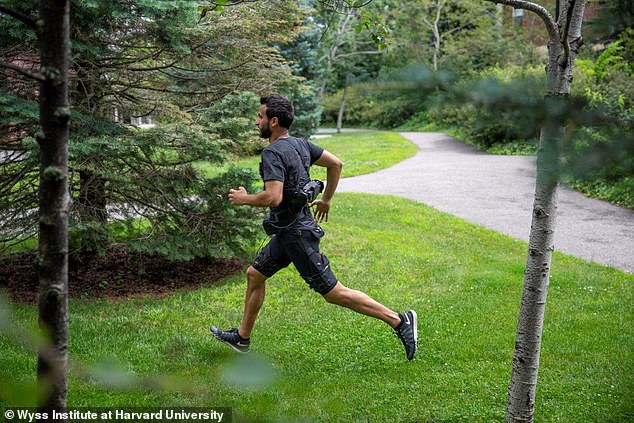 READ  Scientists find answer to life, universe and everything… and the answer will surprise you!

Experts say the suit (pictured) could help keep soldiers and first responders fresh by lightening the load of their jobs. The portable gear may also improve mobility and quality of life for the elderly and people suffering from neurodegenerative disorders

The suit is the culmination of years of research by the United States Department of Defense.

A medical version of the exosuit aimed at improving gait rehabilitation for stroke survivors is now commercially available in the US and Europe.

The latest model one is designed to be simpler and lighter compared to the past multi-joint model.

More than 90 per cent of its weight is located close to the body’s centre of mass.

The exosuit needed to be able to distinguish between walking and running gaits and change its actuation profiles accordingly.

During walking, the body’s centre of mass moves upward – the opposite to running.

The full findings of the study were published in the journal Science.