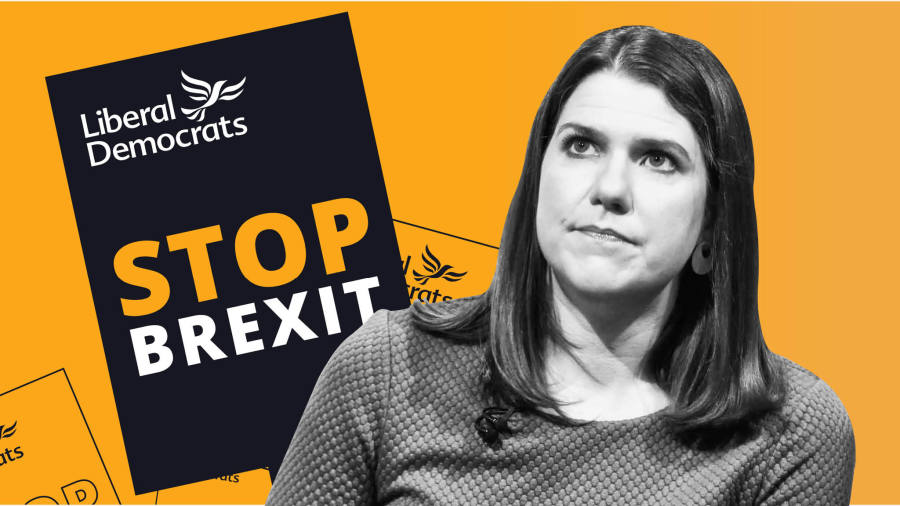 With a clear pledge to stop Brexit, the pro-European Liberal Democrats entered the general election campaign offering Britain’s Remainers a glimmer of hope.

But with just over two weeks to go to polling day, Lib Dem leader Jo Swinson’s hopes of taking the UK’s third-largest party to an unlikely victory appear to have been dashed, squeezed between Boris Johnson’s Conservatives and Jeremy Corbyn’s Labour.

Most pollsters predict that even on a very good night on December 12, the Lib Dems will do well to increase their seat share in the House of Commons from 19 to 40. The Financial Times’ poll tracker has the party on just 15 per cent.

Buoyed by high profile defections of MPs from the Conservative and Labour parties as the Brexit impasse became a full-blown political crisis, Lib Dems hopes are pinned on winning over moderate Tory and Labour voters crying out for a centrist party.

Ms Swinson kicked off the Lib Dem election campaign by suggesting she stood a real chance of being prime minister — a big claim given the first-past-the post voting system makes it almost impossible for a third party to break through.

But there are also concerns that under her fledgling stewardship — the 39-year-old from Glasgow became leader in July — the party has committed a tactical error by ditching its support for a second EU referendum in favour of a straightforward promise to scrap Brexit by revoking the Article 50 exit process.

Senior figures in the party admitted on Monday that the decision to take such a hardline stance may have started to backfire.

READ  Make the most of your man cave with savings on gadgets, comfy seats and lighting – plus £9.50 holidays are back

The mood in the Lib Dem camp is one of “concern, close to despair”, according to one senior party figure, and is in contrast to the bullish mood of the summer when the Lib Dems were confidently predicting they would win between 60 to 80 seats in the 650-strong Westminster parliament.

“We had one of the most bullish presentations I’ve ever seen in the party,” said one person who attended a briefing with pollsters in August. “The idea of revoking Article 50 was polled — and it polled incredibly strongly.”

Insiders said there was logic behind the initial decision to adopt the policy as the Lib Dems grappled with how best to position themselves as the party of Remain in an election where Labour appeared to be leaning towards supporting a second referendum.

Mr Corbyn, the Labour leader, eventually came out in favour of a second poll, but last week he pledged to take a “neutral” stance in any referendum, a move that many believe has again muddled his party’s position.

“I don’t have a time machine, but I’d say we probably didn’t need to have gone full on revoke knowing what we do now about Corbyn’s stance”, said one party adviser. “It might have put some people off.”

Changing the tone mid-campaign isn’t how you’d draw it up at the start. But it’s better to show flexibility than blithely carry on

Ms Swinson has now downgraded her party’s ambitions. After conceding at the weekend that Mr Johnson looked on course to secure a majority, she switched to the message that her party is best-placed to deprive the Tories of a majority. The Lib Dems could then use their influence to demand a second EU referendum, she argued.

Yet she refused to say which of the main parties she would be prepared to back in the event of a hung parliament.

The confused messaging has raised fears she is turning off voters. “Changing the tone mid-campaign isn’t how you’d draw it up at the start,” said one adviser. “But it’s better to show flexibility than blithely carry on.”

The party is also facing questions over its decision to run a “presidential” campaign based around Ms Swinson after polling by YouGov revealed she has become less popular with voters as her visibility on the campaign trail has increased.

Lib Dem officials insisted they had to run this style of campaign given that the other parties were doing the same, but it was unclear whether it would work.

But one party insider said there was an assumption the public would share the party’s internal enthusiasm for Ms Swinson.

“There are a lot of people within the Lib Dems who love Jo and worship the ground she walks on. I think there was an assumption that the public would fall head over heels. She’s good but she isn’t that hyper-charismatic figure.”

Up against two well established and often divisive opponents, the Lib Dems had hoped Ms Swinson’s relative obscurity would prove an advantage with voters who hold deeply entrenched views about her rivals.

The decision by Brexit party leader Nigel Farage not to run a full slate of candidates in the election has also delivered a big blow to the Lib Dems campaign.

It has removed the likelihood of splitting the Leave vote and allowing the Lib Dems to win in some constituencies. “That fundamentally changed the election and made things more difficult for us”, admitted one party official.

They also argued that Ms Swinson’s exclusion from the first televised head-to-head election debate cost her the chance to mark herself out.

“We shouldn’t forget that, more often than not, the remorseless logic of first-past-the-post will see the UK’s third party ground between the Tory and Labour millstones — unless of course, as in 2010, its leader is given equal and therefore game changing access to a three-way leader’s debate,” said Tim Bale, a politics professor at Queen Mary University of London.

“But, in hindsight, the Lib Dem’s decision to promise revocation of Article 50 and all the early nonsense about Jo Swinson becoming prime minister may have proved counterproductive.”