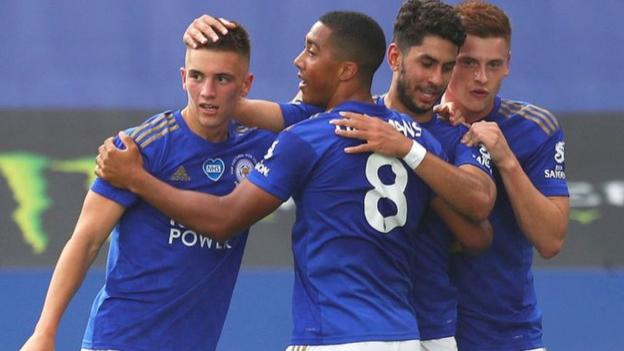 Their win also means they qualified for next season’s Europa League at least.

But Rodgers wants Leicester to secure Champions League football for a second time after becoming Premier League title-winners in 2016.

“The result gives us the second-highest Premier League finish in Leicester’s history. We have two games to go to create some more history,” he said.

“We all sat down at the start of season and said, it would be huge challenge for Leicester to get into Europe, so do that in my first season here, to guarantee that is a phenomenal achievement.”

The hosts, who dominated most of the game, went ahead when impressive 19-year-old debutant Luke Thomas crossed low to set up Perez after 29 minutes.

They should have extended their lead after the break when Harvey Barnes was twice denied by United goalkeeper Dean Henderson after clever through balls by Jamie Vardy.

The Foxes’ top scorer also hit the post, and it looked as though Sheffield United might be fortunate enough to equalise when Jack O’Connell’s shot was tipped wide by Kasper Schmeichel.

But, as the game hung in the balance, substitute Gray, on for Barnes, collected Vardy’s pass and beat Henderson to finally seal the win after 79 minutes.

Leicester’s victory was only their second in six games since the restart but it was a timely boost for Rodgers’ team, who moved three points clear of fifth-placed Manchester United.

Blades boss Chris Wilder was fuming with his players afterwards as the result ended a four-game unbeaten run which included wins over Tottenham, Wolves and Chelsea.

They remain eighth, two points behind sixth-placed Wolves, with the prospect of European football next season now out of their hands.

The hosts have struggled since the Premier League’s restart, but this was a vastly improved display after their chastening 4-1 loss at relegation-threatened Bournemouth and it was engineered by an impressive blend of youth and experience in their side.

Their biggest threat in the first half came down the left side where Barnes’s pace was boosted by some fine crossing by England under-19 international Thomas, who had already picked out Perez for a close-range header before he supplied the Spaniard’s eighth goal of the season.

Filling in for the injured Ben Chilwell, who has been linked with a move to Chelsea, Thomas showed his manager Rodgers that he is a more than capable back-up.

Led by the impressive Youri Tielemans, who orchestrated Leicester’s midfield to out-manoeuvre the visitors, the 2016 Premier League champions could have been further ahead before the break but for Henderson thwarting both Vardy and Perez.

Having bossed the first half, they were then forced to play on the counter attack after the break following a triple half-time substitution by Wilder.

That shift played into the hands of Vardy, who showed his guile at the age of 33 to twice set up Barnes. The midfielder really should have capitalised.

It felt like they could be crucial misses as the Blades pressed for an equaliser, but it was Barnes’ replacement Gray who had the required composure as he collected Vardy’s clever lay-off and steered into the net for his third of the season for a victory that guarantees at least Europa League football in 2020-21.

It was ample reward for a display which bodes well for their remaining games this season and another potential Champions League campaign next season.

Whether Sheffield United play European football next season or not, it has already been a brilliant campaign for Wilder’s team, their first back in the top flight after a 12-season gap.

The fact they shook off a poor start when the Premier League resumed to earn 10 points from 12 in their previous four matches was a testament to their durability and craft.

But after three wins over teams above them, they found Leicester a more difficult task.

Although they made a good start where David McGoldrick fired over from George Baldock’s cross, they were second best for much of the first half as Leicester’s players, set up in a 3-4-3 formation, continually asked questions of the Blades’ resolute defence.

Much of that was down to Tielemans. Even though the visitors had an extra man in central midfield, they could not get near the excellent Belgian.

It led to a slight improvement, but O’Connell’s effort after 63 minutes following John Egan’s nod back from a corner was their first shot on target.

The Blades continued to probe, although their best efforts came from set-pieces and, as they left gaps in their defence, it was Vardy’s threat was which eventually their undoing.

Every day’s a win day for Foxes – the stats

‘We never deserved anything’

Sheffield United boss Chris Wilder: “We were way off of it. We have taken some enormous steps forward this season, but the goalkeeper kept us in the game. We never deserved anything form the game – off it from the first minute to the 90th, no excuse from us. Technically very poor, physically out-fought.

“We have done a job on a couple of teams recently but their fight was bigger than ours and they wanted the result more.

“They were sharper, quicker in thought and in action. We have helped them get going again.”

Leicester boss Brendan Rodgers on Sky Sports: “I thought we were brilliant, Sheffield United deserve so much credit for how they have worked and how Chris Wilder has got them playing, but we were outstanding.

“We have played well since we have come back but not been consistent enough. Tonight we were able to do that. A very good performance.

“The result gives us the second-highest finish in Leicester’s history. We have two games to go to create some more history.”