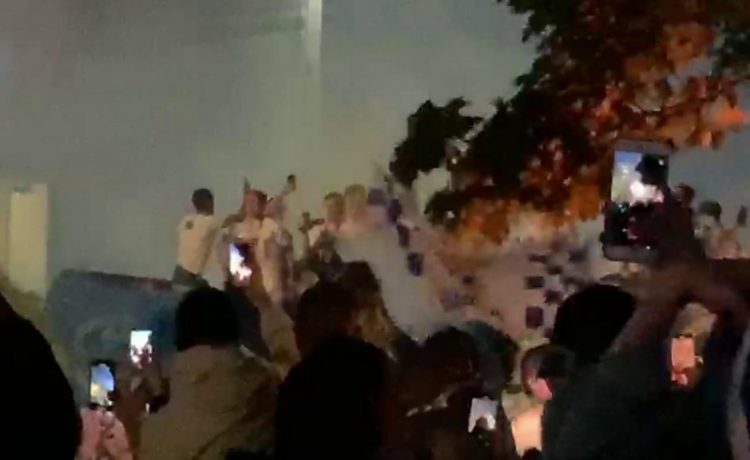 Leeds United have defended the decision to parade the Championship trophy from an open-top bus in front of fans after previously telling people to stay away.

Thousands gathered outside the club’s ground to celebrate its return to the top flight, with four people arrested for public order offences.

Officials had urged fans to celebrate at home.

However, following the 4-0 home win over Charlton, the team made a brief appearance outside the ground.

Chief executive Angus Kinnear had urged fans to stay away from the game, saying when the time was right “we will celebrate in style”.

But in a later statement the club said: “Following consultation with the Safety Advisory Group and council, Leeds United arranged for a bus to be parked outside the East Stand reception as a contingency to assist dispersal should a crowd congregate at Elland Road, despite a month-long campaign from the club and supporter groups to encourage supporters to stay at home.

“The safety group believed that a brief appearance from the players with the Championship trophy would help to signal an end to proceedings, encouraging fans to head home safely.

“In challenging circumstances, fan safety has always been our priority.”

Supt Jackie Marsh from West Yorkshire Police said four people had been arrested for public order offences and one officer received a minor injury but did not require hospital treatment.

“While most of those who gathered did so with good intentions, there were some missiles thrown which resulted in officers having to wear protective equipment,” she said.

The move attracted criticism on social media, particularly from those who had heeded the original advice to stay away issued by the club.

10:25PM – Leeds United players are on an open top bus outside Elland Road with fans

Bet they all clapped for the NHS too didn’t they? Horrible. pic.twitter.com/MUNAiQPOZe

@cllrjudithblake can you explain to me and thousands of other Leeds United season ticket holders who followed your council’s orders to stay away from Elland Road tonight, only to learn that the council had given permission for the players to appear on an open top bus? 1/2

As it happened: Leeds United fans celebrate promotion to the Premier League.

It comes after supporters gathered outside the ground on Friday to celebrate the club’s return to the Premier League for the first time in 16 years.

On Sunday, about 7,000 fans packed the city’s Millennium Square.

A number of fans arrived at the ground on Thursday morning to help in the clean up operation after piles of litter were left behind.

One supporter, Chris, said: “It’s nice to just come down and do my bit really.”

“By the time we’d got here, the council had cleared most of it already. They’ve done a cracking job, full credit to them.”

In contrast to the scenes outside the ground, the trophy was presented inside an almost empty stadium.