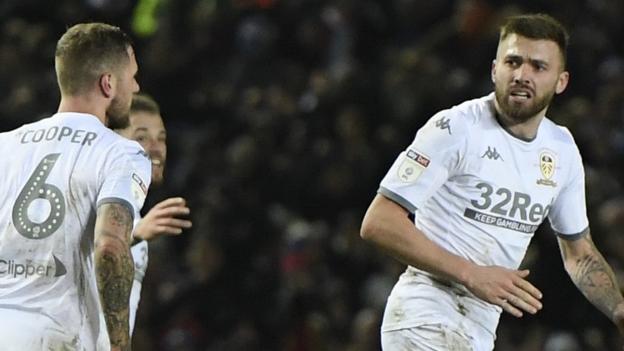 Leeds United scored an 89th-minute equaliser to draw with Preston at Elland Road and stay three points off the Championship lead.

Alan Browne had given North End a first-half advantage, but Leeds’ late pressure finally told when Stuart Dallas’ shot from just outside the box went in via a deflection.

West Bromwich Albion’s 1-1 draw at Barnsley earlier on Boxing Day had given Leeds the opportunity to narrow the gap at the top of the table, but Marcelo Bielsa’s side were unable to take full advantage.

That was largely down to Preston’s excellent start, limiting Leeds to few chances and taking the lead with an expertly taken goal on the counter attack.

The move was started by Sean Maguire’s tackle on Mateusz Klich near to his own penalty area.

From there, North End worked the ball forward quickly and Republic of Ireland midfielder Browne confidently finished left-footed past Kiko Casilla from 12 yards.

That put Leeds behind in a league match at Elland Road for only the second time this season and, without injured forward Pablo Hernandez, the hosts struggled to create clear chances until the midway point of the second half.

Left-back Ezgjan Alioski hit the post with a powerful low drive from the edge of the area and sliced a shot over the bar after a cross had broken to him in the box, while Preston goalkeeper Declan Rudd made stunning saves to keep out headers from Alioski and substitute Eddie Nketiah.

Alex Neil’s Preston have followed a four-match losing sequence by taking eight points during a run of four games without defeat.

They are sixth in the table, although they would have gone third had Dallas not struck in the closing minutes.

Leeds, who won seven successive games in November and December, have picked up only two points from their past three fixtures and, after a trip to Birmingham City on Sunday, they face West Brom at The Hawthorns on 1 January.

“I was not happy with the first 20 minutes, it was not a good spell for us, we did not cope with their pressing and did not get into our game. I felt we took control after their goal.

“It was a better display from then and we controlled 75% of the game. We had enough chances to win the game towards the end and we probably should have won it.

“I admire Preston for how they got at us in the first quarter of the game. They worked very hard to put us under pressure and close us down. We struggled to move the ball today.

“We had to move it sideways a lot and when we lost the ball going across the line it created problems for ourselves.”

“It took a deflected effort for them to get something from the game. Naturally we are disappointed not to win but I am proud of my players,” he said.

“They are one of the top sides in this division and we more than matched them.

“I can’t ask for any more from the players. They played really well and I felt we did enough to win the game.”