She was accused of editing her social media snaps earlier this week.

But that hasn’t stopped Lauren Goodger from defiantly posting selfies to her Instagram account, as she served up her signature pout while wearing a bikini on the beach on Sunday.

The former TOWIE star, 33, let her ample cleavage bask in the scorching British sunshine as she spent a day away from Essex in a bid to ‘escape from everything’. 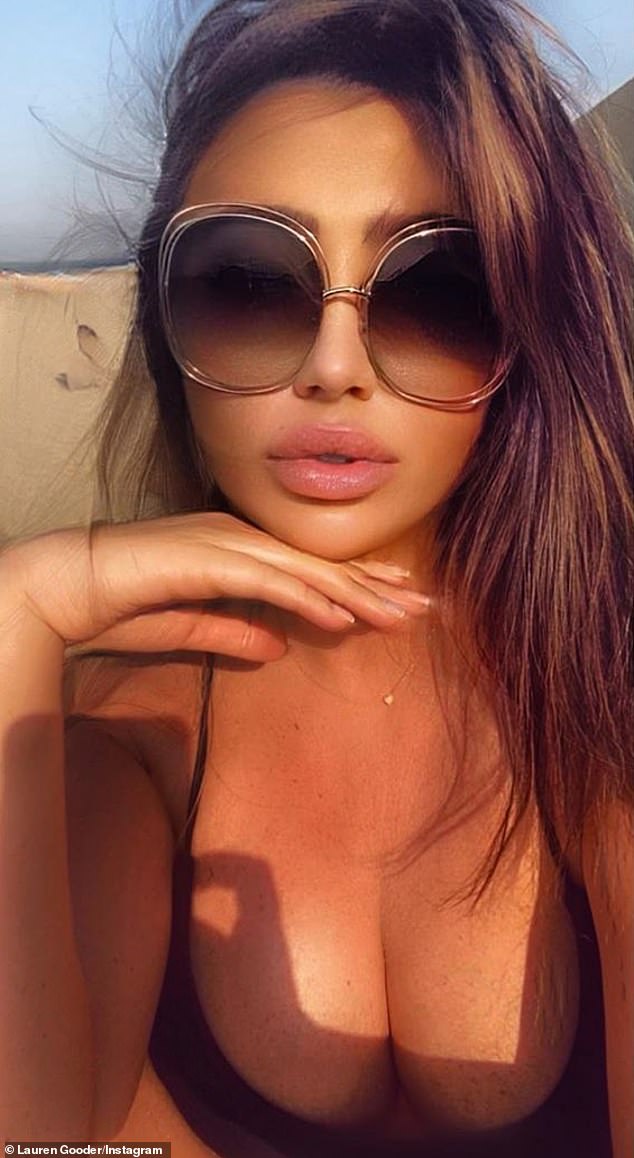 Bronzed beauty: Lauren Goodger delivered the ultimate pout and displayed her ample cleavage as she enjoyed a getaway to the beach on Sunday

She was bronzed to perfection as she posed on the coastline wearing a simple black bikini top.

Lauren left little to the imagination as she showcased her curvy figure and puckered her lips for a selfie.

Her highlighted brown tresses were swept effortlessly to the side and her makeup mirrored a neutral and warm toned palette. 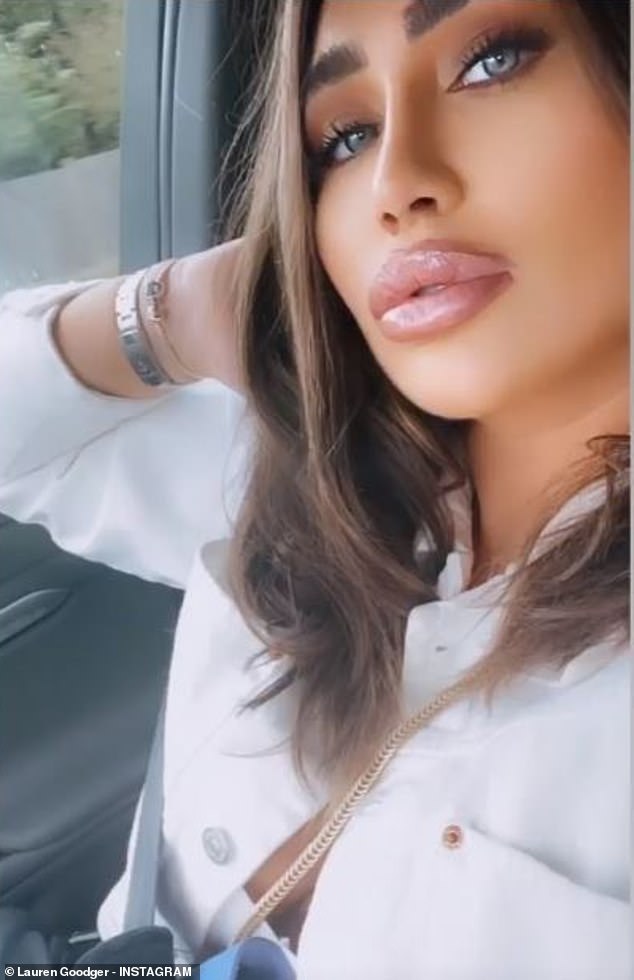 Too glam to give a damn: The former TOWIE star, 33, sported her brunette locks in a natural wave and opted for a bronzed makeup look as she said she needed to ‘escape everything’

Lauren wore a pair of statement ’60s inspired tinted shades to protect herself from the glaring British rays.

She delicately placed her hand under her chin for the poised yet sultry Instagram snap.

The reality star captioned the image: ‘I followed my heart and it led me too the beach…. days like this where I can escape from everything.

‘Nothing I more love that the sound of the Sea, sand and the sun #LeaveMeB #clearhead #comingback #recharged.’ 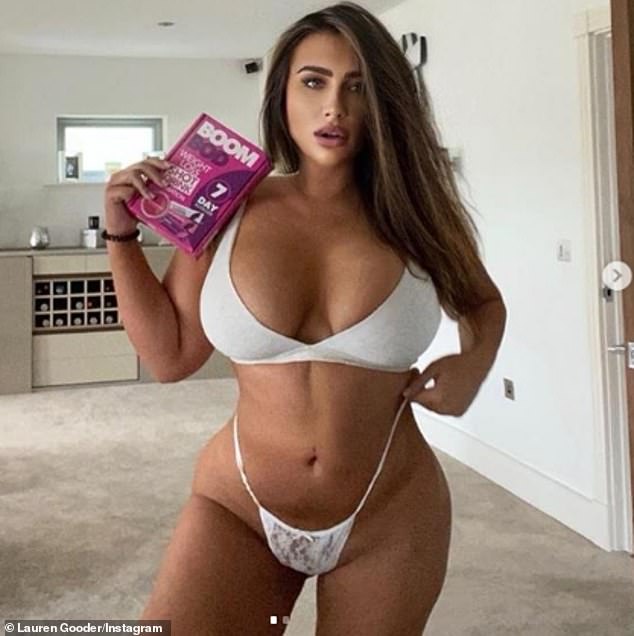 Hot water: Lauren has come under fire recently after fans called her out for Photoshopping her images on social media, specifically one of her posing in a white bikini (pictured above)

Lauren came under fire this week after she was accused of enhancing her social media images with photo editing tools.

On Wednesday, she hit back at ‘vile, nasty, evil’ trolls in a lengthy rant.

The former TOWIE star vowed to be even more ‘successful, sexy and confident’ than ever after her followers criticised her for enhancing her appearance in a white bikini. 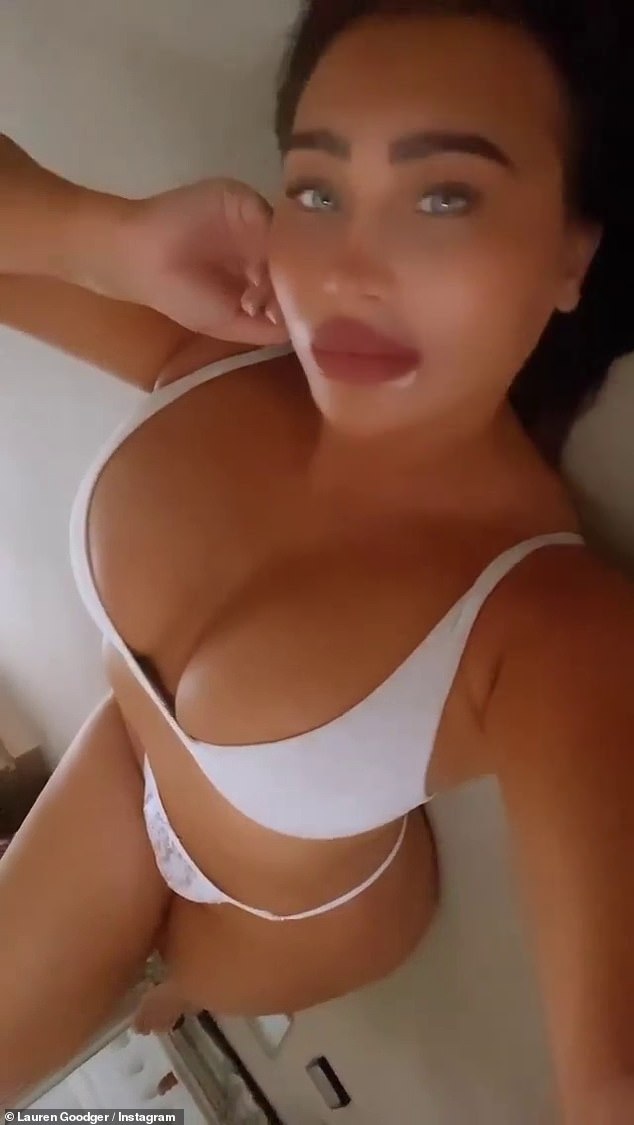 Bounce back: The former TOWIE star hit back at fans who criticised her and defiantly said she will be more ‘successful, sexy and confident’ than ever before

In a lengthy rant, Lauren wrote: ‘Please look at every other celebs page comments who are posting pics of them with @boombod and please look at mine!

‘Same brand and same pics! This is why I never take ANYTHING seriously what my “hating” followers say. They just want any excuse to hate and make vile, nasty, evil comments.’

Lauren has defended other celebrities such as Kylie Jenner- who was called out for a Photoshop blunder- and she has accused fans of fuelling hate out of jealousy. 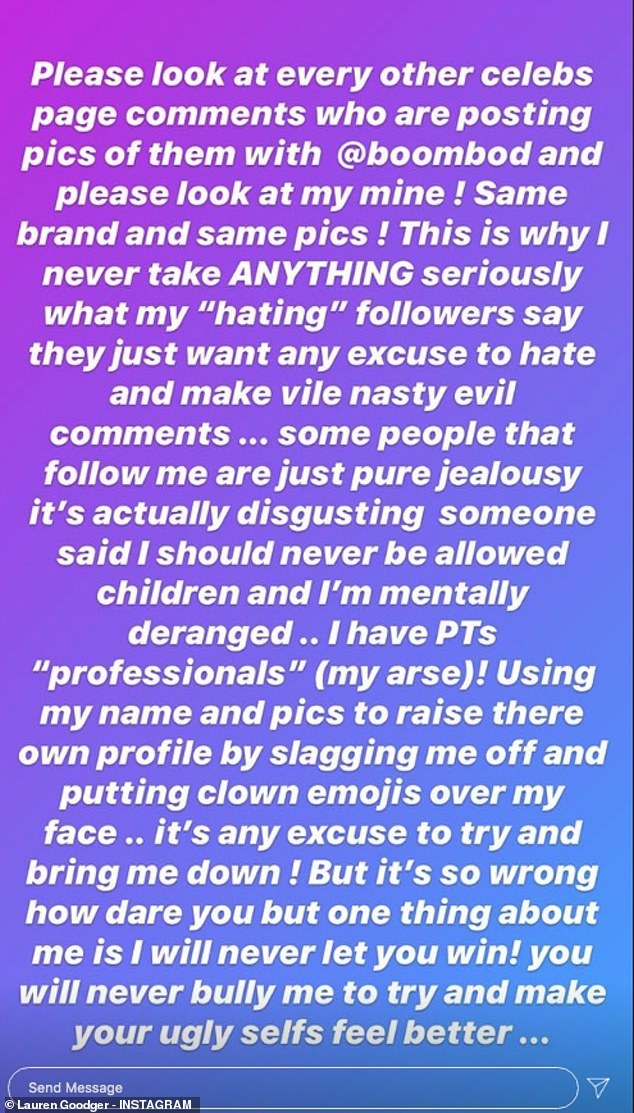 She said: ‘This is why I never take ANYTHING seriously what my “hating” followers say. They just want any excuse to hate and make vile, nasty, evil comments.’

She added: ‘Some people that follow me are just pure jealousy. It’s actually disgusting. Someone said I should never be allowed children and I’m mentally deranged.

‘I have PTs “professionals” (my a**e)! using their own profile by slagging me off and putting clown emojis over my face.

‘It’s any excuse to try and bring me down! But it’s so wrong. How dare you. But one thing about me is I will never let you win! 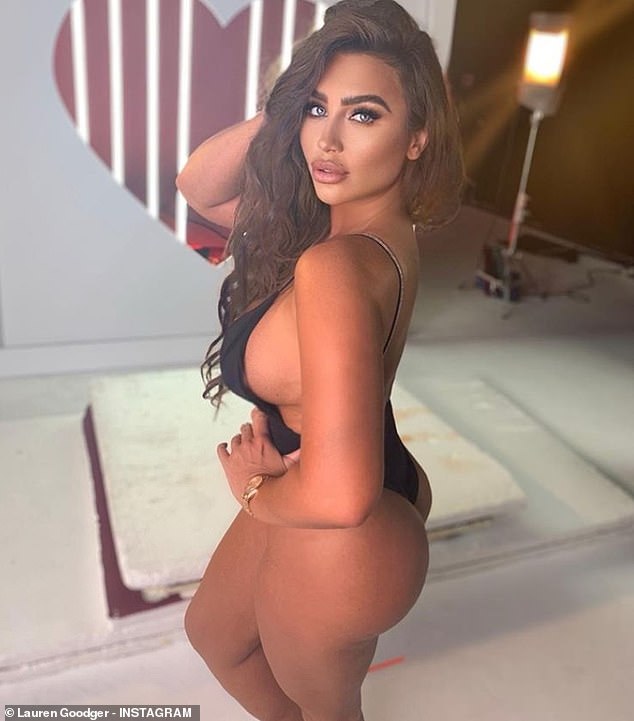 Hourglass figure: Regardless of the backlash, the brunette beauty frequently posts pictures of her voluptuous curves to social media

Westwood says feedback on safety convinced him to play in U.S. Open